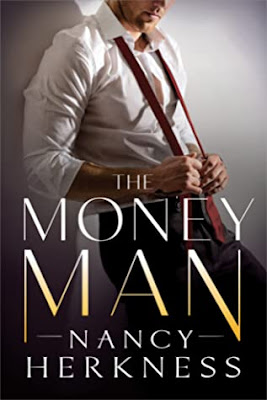 She’s small-town business. He’s Manhattan high finance. Together they ignite in a novel about unexpected love and danger by Nancy Herkness, award-winning author of the Wager of Hearts series.

New Jersey bookkeeper Alice Thurber has a carefully constructed risk-free life. Everything in perfect balance. Until little discrepancies show up in her clients’ accounts. Most would ignore it. Not the impeccably precise Alice. In desperation she reaches out to a high-powered consulting firm for help. New York City’s movie-star handsome financial wizard Derek Killion reaches back. All he has to do is smile and Alice’s fantasies stir. A girl can dream, can’t she?

A cofounder of KRG, Derek’s promise is to advise small-business owners in trouble. He never guessed that assisting the diffident but sexy Alice would be so captivating and make it so hard to keep his desires in check. But just as intriguing is the alarming puzzle behind the computer glitch that’s unsettled his client. As the investigation unfolds, they must also confront an attraction too palpable to ignore. Every new dark twist they follow is only bringing them closer together—in passion and in danger.

Confession time...I didn’t read the blurb for Nancy Herkness’s The Money Man. Since becoming a fan of Nancy a few years ago, I just wanted to read the book. I was pleasantly surprised by several things. The Money Man contains a little suspense and both the hero and heroine are accountants!

Alice Thurber isn’t a risk-taker. After growing up in an unsteady, unreliable family, Alice turned to numbers because they were consistent and made sense. Alice owns and runs a small bookkeeping company out of her home in New Jersey. After switching several of her clients over to a new accounting software, she starts to notice little small inconsequential shortfalls in the numbers. After coming up empty as to why this was happening, Alice turns to KRG Consulting Group and their Small Business Initiative, aimed to help small businesses in need.

Derek Killion’s specialty is finance. He represents the “K” in KRG Consulting Group. He never wants to let the fact that the company is now a high-powered consulting firm known worldwide distract him and his partners from their humble beginnings. As a way to honor those who helped them succeed and give back, Derek convinces his partners Leland Rockwell and Tully Gibson to create the KRG Small Business Initiative. Derek is weeks away from having to leave the country on an extended business trip, but when the first request comes into the SBI for help, he doesn’t want to pass it off to one of his partners. Thinking the shortfall is an easy fix, he contacts Alice to meet with her, never expecting she’s about to throw a curveball into his well structured and planned out life.

As Alice and Derek look into the accounting discrepancy, they soon find out there’s more going on than meets the eye. One innocent question on Alice’s part puts her in the crosshairs of a dangerous madman set on revenge. As time runs out, Derek and Alice are going to have learn to be creative in their quest to save their lives and the livelihoods of hundreds.

The Money Man was a book I could not put down. Alice and Derek each prove you can’t judge a book by its cover. Their attraction and connection are instant. I loved the surprise of this being a romance with suspense elements. I loved even more that I was on the edge of my seat, wondering what was going to happen. The main characters of the second and third books have already been introduced. I’m looking forward to seeing how those stories play out, with the heroes being a computer whiz and a security expert.

Nancy Herkness is the author of the award-winning Second Glances, Wager of Hearts, and Whisper Horse series, published by Montlake Romance, as well as several other contemporary romance novels. She is a two-time nominee for the Romance Writers of Americas RITA® award.

Nancy has received many honors for her work, including the Golden Leaf Award, the Maggie Award in Contemporary Romance, and the National Excellence in Romance Fiction Award. She graduated from Princeton University with a degree in English literature and creative writing.