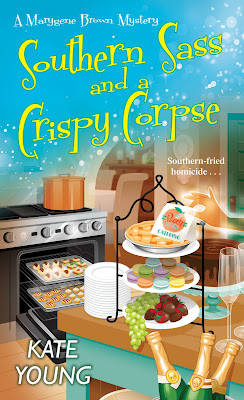 On Georgia's picturesque Peach Cove Island, a killer is serving up a two-for-one special...

After their mama's passing, Marygene Brown returned to Peach Cove Island to help her sister Jena Lynn run the family diner, renowned for its homemade peach desserts. But Mama is never too far away--her sassy spirit haunts the island, and more specifically Marygene. Lately Mama has been warning her that the dead will seek her out to solve their murders, an idea Marygene is far from peachy keen on.

But that prophecy appears to be coming true when she goes skinny-dipping off the island and swims right into a woman's charred corpse floating in the waves. And when Marygene and her brother Sam come upon a second burned body in a wine cellar at an event they're catering, it appears they have a double homicide on their hands. It soon turns out the victims have more in common than their charred remains, and Marygene will need to double down to find a killer who has no aversion to playing with fire. Good thing Mama has her back . . .

Hi Marygene. Welcome to Read Your Writes Book Reviews. How are you?
I’m doing quite well. Thanks for having me!

You’re the protagonist in Kate Young’s cozy mystery series, which happens to be named after you. What can you tell me about yourself?
Well, let’s see. I live on Peach Cove Island located off the coast of Georgia. The island where I was born and bred. I spent a couple of years living in Atlanta, but it didn’t stick. My hometown is heavenly and I’m never leaving again. I adore the sun, hot weather, and lapping waves of the Atlantic.

For a living, my sister and I own and operate The Peach Diner. Allow me to entice you. The tinkling of the door signals your arrival. You’ll be welcomed by the aroma of food being fried, smothered, and covered. As you wait to be seated, take in the fifties motif decorations. From the black-and-white checkered floor tile that’s offset the peach vinyl booths and chairs with a white stripe down the center to the long counter that runs the length of the room and is fitted with eighteen high chairs. The walls are adorned with old photographs of the town and townspeople, with the back wall dedicated to Peach Cove’s high school football team.

The Peach Diner sounds good. For generations, your family has lived in Georgia and ran the Peach Diner. Did you grow up in the kitchen baking?
I did grow up baking. It came naturally. I guess you could say, I inherited the foodie gene. It’s known around the island that I have the gift of an expert’s palate. It’s true I can tell you what’s missing from a recipe or what needs to be adjusted that would send the dish right over the top. If a dish needs a dash of this or a dessert calls for a hint of zest or perhaps a splash of vanilla, I’m your gal.

Tell us about a defining moment in your life.
Marrying Mr. Wrong. Since my divorce, I’d come to terms with the abuse I’d endured by my ex’s hand. I’d been surprised by how much sharing with a group of others who’d had similar experiences helped me along my healing journey. That, combined with private therapy, gave me a healthier perspective on myself and life. I’ve learned that I possess the strength to endure and grow. And that our pasts do not define our futures.

What’s something readers would be surprised to learn about you?
Something surprising about me…hm… Oh! I see dead people. LOL Sorry, my best friend Betsy and I just watched Sixth Sense last night and she begged me to use the line in this interview. I don’t actually see dead people. I do, however, see one of the deceased. My mama.

Where to begin. My mama, Clara Brown, has been tied to the island since the day she passed. She wasn’t what you’d call a pure heart in life, and now the powers that be forced her to remain in limbo until she makes amends in order to cross through the pearly gates. At least that was how I understood it. My best friend, the one I mentioned a moment ago, Betsy Myers, her meemaw knows all about island folklore. Meemaw passed her knowledge on to my friend, who then passed it on to me. Mama hadn’t denied the claim, deeming it accurate in my mind. Though I won’t lie, the distinct possibility that Mama could be a hallucination and I have yet to be diagnosed with a mental disorder lurks in the back of my mind often.

Why do you feel the need to put on your sleuthing hat and investigate murders?
I don’t have a choice in the matter. From what I’ve gleaned from Mama, when one of the deceased is forced to remain, it creates an energy around the person they’re communicating with. An aura, if you will. The deceased will be drawn to that person to enlist their aid. In this instance, me.

How does your mama help guide you in your murder investigations?
Mama helps when she can. Sometimes she intervenes saving me from harm. She’s guided me to clues before. Then there are the times when she simply gets in the way. She and I are both trying to figure things out.

Is Peach Cove Island, Georgia a real place or just a figment of your creator’s imagination?
Peach Cove is was inspired ‘loosely’ by Savannah, GA and Seaside, Florida.

What do you think about your creator Kate Young?
She’s as crazy as I am.

Was there ever a time when you interrupted her writing thoughts to tell her you didn’t like something? And how did that work out for you?
I can’t say that’s ever happened. We’re pretty in sync.

Marygene, thank you so much for taking the time to answer some questions for me.
You’re most welcome. Thanks again for allowing me to stop by. Y’all take care.


Want a taste of Crispy Corpse? Here’s how my day begins.

If someone had asked me yesterday how I envisioned a perfect day, I would have told them a morning swim in the ocean followed by a day on a lounge chair with a good book and an ice-cold drink. Now I sat on my beloved beach a few feet away from a dead body with my blissful notion spoiled.

The murky water, a product of last night’s storm, had obstructed my view of the sandy floor as my toes plunged into the grainy depths. The current hadn’t been too strong. Fine for my dawn swim. Our island used the flag method to notify its residents and tourists as to the ocean’s safety conditions. Red flag meant high surf and strong currents. Yellow, which flew today, moderate surf. Green meant calm. And lastly, the purple flag indicated a hazard from dangerous marine life that lurked too close to the shore.

The waves had lapped against my bare skin as I waded out into the surf, pulled my goggles down over my eyes, and dove through a wave. Bliss enveloped me as I swam the morning’s troubles away. Several strokes in, I took a hit to the foot. Unnerved, I hoped someone had simply lost their paddle or bodyboard. Marine life was also the ever niggling worry in the back of my mind. Encounters happened. Usually harmless and simply curious, baby sharks ventured closer inland. I sped up my strokes.

A microsecond later, I took a major hit to the side. When I turned to investigate, striking out with both hands, something slimy slid between my fingertips, and I came face to face with a badly burned profile. I learned, in that moment, you could scream underwater. Bubbles flew from my lips as all the air left my lungs. During some untimed gasps, I gulped in salty water. My chest burned. My arms thrashed, instead of slicing through the water, as I fought to swim back to the shore.

Waves crashed over me, shoving me toward the ocean’s floor. A spike of adrenaline shot through me, fight-or-flight engaged in battle. I fought the unforgiving current and scrambled toward the shoreline. Pain shot through the soles of my feet as they pounded against the half-buried and broken shells at the water’s edge. Pain notwithstanding, I persevered and propelled myself forward with the aid of a crashing wave until I fell hard to my knees. I crawled and sputtered before I collapsed on the beach. Sand stuck to my body in all the uncomfortable crevices where sand didn’t belong. When I finally managed to crack open my lids, I came to the knowledge that the same wave that had flung me toward the shore had also flung the body. A half scream, half sob left my lips, and I scurried like a crab away from the corpse.

Of all the mornings to come out here and be daring. Now, with my robe fastened tightly, I watched as the Peach Cove Sheriff’s Department did their thing. My deceased mother sat next to me, chastising me, of course. 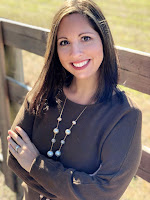 Kate Young writes Southern mystery novels. She is a member of Sisters in Crime and the Guppy Chapter. Kate lives in a small town in Georgia with her husband, three kids, and Shih Tzu. When she is not writing her own books, she’s reading or cooking.

You can follow the Southern Sass and a Crispy Corpse Blog Tour here.

a Rafflecopter giveaway
Follow
Posted by Kim at 3:09 AM