Interview & Excerpt ~ A HIDDEN HEIR TO REDEEM HIM by Dani Collins 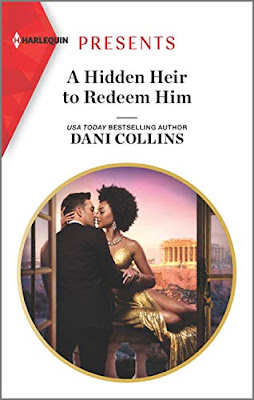 She kept their child hidden…

Now the secret’s out!

Valentino Casale is outraged to find Kiara kept their daughter a secret from him for two years! Forever branded by his own illegitimacy, the hardened billionaire wants to do things differently…

Kiara could never regret the consequence of her one delicious night with Val. Even if he turned out to be every bit as coldhearted as their night was hot! Yet behind Val’s reputation is another man—revealed only in their passionate moments alone. Could she give that man a second chance?

Hi Dani. Welcome back to Read Your Writes Book Reviews. How are you?
Hi Kim, thanks for having me back. I’m thrilled to be here. I hope you and your readers are all staying well during this trying time.

A Hidden Heir to Redeem Him (I love that title.) is part of your duet series called the Feuding Billionaire Brothers. First of all, what can you tell me about this series?
All the credit for the titles goes to the team at Harlequin Mills & Boon—so I can say that I love it too without sounding too braggy.

When I first conceived of the duet, I knew I wanted it to be about two half-brothers who share a father and wind up in a rivalry. I wanted the father, Niko, to somehow know that each of his sons had a hidden heir. He leaves his fortune to the babies instead of his sons, which is how the men learn they have children. Spoiler alert: Niko was not a very nice dad.

I’ve read an excerpt from A Hidden Heir to Redeem Him and I’m mesmerized. Please tell me about Valentino “Val” Casale and Kiara O’Neill.
I’m so glad you enjoyed the excerpt! Val’s mother was a model. She got pregnant on purpose, hoping to force Niko to break his engagement and marry her. He didn’t, leaving Val to be born illegitimate. Val was subsequently teased for being a bastard and has done his best to live down to the label. He began modeling as a baby. At thirteen, he had amassed a fortune of his own and turned his back on Niko.

Kiara is an orphan who took refuge in art. For years, she didn’t care how hand-to-mouth she lived so long as she had paint or pencils. She meets Val by chance in Venice and they have a one-night stand. When she later learns she’s pregnant, she tries to reach out only to hear through his mother that he doesn’t want the baby. Niko then draws her in, promising to be a patron of Kiara’s art if she will raise her baby on his Greek island. It’s an offer she can’t refuse.

Val comes off as being hard and uncaring. Because he’s one of your Harlequin Presents heroes I know he’s so much more. Tell me about the man no one ever sees.
There’s a spoiler where his father betrayed him in a pretty terrible way. Val is then determined to be as awful as possible and tries to cultivate himself into having no emotions at all. But he starts out as a model and develops his own fashion label to build his fortune. He’s a man who appreciates art and understands the value of artists. It’s the reason he was drawn to Kiara and continues to have a soft spot for her even though he’s furious with her.

I’ve read about two chapters of the book. From what I’ve read, Kiara, in my opinion, seems to have lost just a part of who she truly is, in order to give a better life to her daughter than she had. (She dresses the way Nikolai Mylonas wants her to, from her hair to her makeup. She probably speaks as he would want her to.) Do you think that in the very beginning that is truly the case?
Kiara came from nothing so she’s willing to put up with a lot to have the two things that mean the most to her—her daughter and her art. Compromising to Niko’s wishes isn’t something that bothers her too much because it’s not a battle that’s important to her. Also, as she is at the beginning stages of establishing herself as an artist, she knows there’s a persona she should cultivate for that, but hasn’t found it within herself so she takes the one that is given to her.

I was surprised to realize that both A Hidden Heir to Redeem Him and Beauty and Her One-Night Baby are both second chance, surprise baby stories. I was also surprised by the connection between both of the couples. Did you set out to have this series be so closely intertwined?
Yes. And when I first pitched the duet to my editor, I was like, “Is it too weird if they both have newborns?” We worked out that one would have a toddler, the other a newborn.

Since I brought it up, Beauty and Her One-Night Baby releases on June 1st, what can you tell me about that story?
Initially, I only foresaw it as Book Two in the brothers duet, but while I was still working on Val and Kiara’s story, my editor asked if I wanted to give book two a fairytale spin. In June, all the Presents/Modern titles will be fairytale inspired. It actually worked out beautifully to add beastly scars (and bitterness) to Javiero.

The two stories share similarities. But how are they different?
This was very hard for me! The heroes have very similar backstories and that core trope of a secret baby is hard to keep fresh, but having two men interpret a defining moment differently was fun to explore over two books. They each went in their own direction (with their own baggage) as a result.

The heroines are best friends, but very different. Kiara is an artist with a daughter. Scarlett is a dedicated businesswoman with a newborn son. Val insists on marriage while Scarlett holds off with Javiero. The heroine’s back stories bring different conflicts into their relationships, too.

Each romance stands alone, but reading both stories gives the full picture of how Val and Javiero settle their differences.

I gather that both Val and Javiero are men who have chips on their shoulders and something to prove to the world and themselves. They both, in the beginning, seem to be hard, cold, jaded and cynical. This might be a difficult question to answer, but which one of them is really the caring one?
By the end, both! Ha. I would say that for most of his life, Javiero has been the most obviously caring one. He had a grandfather who mentored him and has relatives who were kind and loving, even if his parents were embittered and cold. He knows how to love, he’s just so angry with Scarlett, he can’t show it.

Val believes himself devoid of the ability to love, but one look at his daughter does him in. When he loves, he’s all in. I think that’s really endearing.

Do the two stories take place simultaneously?
They do!

When a reader finishes reading A Hidden Heir to Redeem Him and Beauty and Her One-Night Baby, what do you want and hope their final impression of these characters are?
As with all my books, I hope that the reader comes away with the sense that we’re all flawed and make mistakes in the moment, but people who are willing to grow and learn and try to do better are worthy of love.

Dani, thank you so much for answering my million questions.
It’s been my pleasure and my honor. Thanks for your interest in my Feuding Billionaire Brothers.

“You know you’re not allowed in the pool without a grown-up.” Kiara’s own heart was pounding. As far as she’d known, Aurelia still couldn’t reach the latch. She’d either grown in the past two days or the pool boy had been sloppy about closing it properly.

“I took my eyes off her for one second,” Val muttered as he came up to them, emanating umbrage.

Kiara tried to calm Aurelia, but it took effort to keep her agitation from her voice. “Listen, baby. Papà thought you were going to get hurt. He didn’t mean to scare you.” She sent him a pointed glance.

“That went both ways,” he retorted sharply.

“Fair enough, but maybe dial back the volume to an age-appropriate two. You scared me, yelling like that.”

His mouth flattened as he looked at Aurelia, who was keeping her face firmly turned from his, still bawling her heart out, tiny body quivering. Remorse creased his expression along with lingering concern. “My heart completely stopped.”

“Welcome to being a parent.”

He jolted at that and watched her continue rubbing Aurelia’s back as she wound down to sniffles.

“We’re working on our apology skills,” Kiara told Val and tucked her chin to address her daughter. “Would you like to tell Papà you’re sorry for giving him a fright?”

“No, Mummy.” She began to sob again, this time more pitifully.

“Aurelia, I’m sorry,” Val said quietly and sincerely. His hand came up as though he wanted to touch her, but he hesitated at the last second and let it drop back to his side. “I shouldn’t have yelled. I was afraid you were going to fall in the water. I may yell again if I’m afraid for you, but I’m not angry. I promise I will never, ever hurt you. Please don’t be afraid of me.”

Kiara was pretty sure Val had never apologized to anyone. Ever. She melted from the inside out, limbs going so weak she could barely hold on to her daughter.

“Do you have something you want to say to Papà?” She prodded Aurelia in a husky voice.

As naturally as if she’d been doing it from the moment she had arrived on this earth, she tipped out of Kiara’s arms and went to her father for a make-up cuddle.

He caught her with an audible inhale of surprise and then released a shaken exhale.

Kiara’s defenses crumbled to nothing then, as she watched the impact of Aurelia’s freely offered love hit Val like a meteorite. The glimmer of something flashed and shattered in his eyes before he closed them, yet he failed to hide his emotions as he cradled her tiny form against his chest. He hung his head over her, and his brow pulled with torment, as though he had indeed rescued Aurelia from the bottom of the pool.

Or she had rescued him.

Kiara pressed a hand to her chest, trying to keep her heart from breaking through her rib cage, while Aurelia let her head settle on Val’s shoulder and stuck two fingers in her mouth. Tears still stood on her cheeks as she blinked at her mother, but her trust in her father had been secured.

📚 You can read my review of A Hidden Heir to Redeem Him here. 📚

Beauty and Her One-Night Baby releases June 1, 2020. It is also the second book in the Once Upon a Temptation series, a collection of books by eight authors inspired by fairytales.