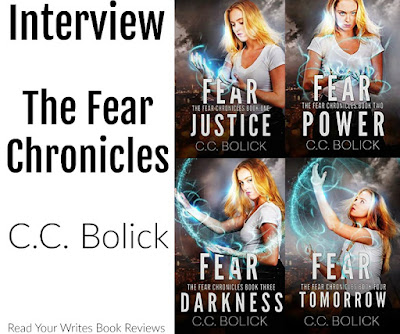 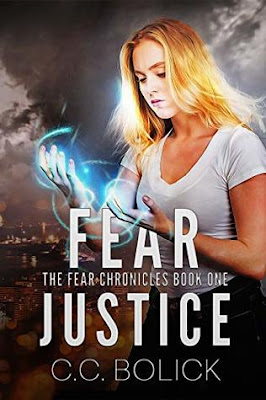 Seventeen-year-old Rena Mason counts the days until she can leave for college. Every night her father drinks himself to sleep, leaving her to care for her younger brother. When her father is kidnapped by terrorists, her dreams of freedom become a nightmare.

Stunned that her father has a history with these terrorists, Rena knows she must run or be their next victim. She learns the tough guy at school has a reason to look after her - he's working for a government agency with the same goal as the terrorists: find a woman who disappeared eighteen years ago. Time is running out since only this woman's special gift can save the world from a looming nuclear attack.

Rena can't trust anyone, especially not the stone-cold agent she's falling for. Can they save the world before Rena's feelings trap her in an agent's fight for justice?

Fear Justice contains elements of fantasy, sci-fi, and paranormal, with a clean romance. It's the first book in an exciting new series called The Fear Chronicles.

Hi C.C. welcome back to Read Your Writes Book Reviews. How are you?
I’ve been great since our last talk – focusing on getting more of my stories on paper. I believe Fear Justice was just coming out then, and now all four books in The Fear Chronicles are complete.

That’s great. Let’s talk about your Fear Chronicles series. What can you tell me about it?
Fear Chronicles is about a girl who learns she has the power to affect a nuclear bomb. This makes her dangerous when she can’t control the power, but also a sought-after weapon for the government and terrorist groups.

Wow. I wasn’t expecting that answer. Can you tell me about some of the characters we’ll meet in the series?
Rena is seventeen, just trying to get through her senior year of high school. She’s been raising her little brother for the last three years; they’ve both grown up a camper. Her dad spends his nights drinking since her mother’s death. You’ll meet people who work for a government agency, both with and without a variety of powers. You might also meet someone from another planet. Just want to make sure I don’t rule anything out.

There’s a character in the series named Travis. What can you tell me about him?
Travis is sent to bring Rena into the agency. He has a power that keeps him from touching anyone. Raised by the agency, his personal mission is justice for his own missing dad.

What do you love about Rena and Travis?
I love their relationship and how both are level-headed about their adventures and each other. Because of their powers, they understand what the other is going through.

What draws these two to each other?
At the start of Fear Justice, Rena is driven to make the best grades possible and get a scholarship to escape her father’s drinking. She’s never given dating a second thought. After meeting Travis, she realizes college may no longer be an option. The fact he always wears gloves makes her want to touch his hand that much more.

Travis avoids relationships with anyone for reasons which will become clear once his powers are known. He’s drawn to Rena because she’s strong and she doesn’t fear him like everyone else.

Every book in the series, including the series title itself, has the word “fear” in it. Does this mean anything?
Rena is literally fearless. A huge part of this series is her finding things to fear to make her power work.

The four books in this series are all interconnected. Do the first three books end in cliffhangers?
I wouldn’t say the first book ends in a cliffhanger, but books 2 and 3 do.

Characters from your previous series make appearances in the Fear Chronicles. Do readers need to read those other series, before reading this one?
I’ve written each series so that readers should be able to pick up one without having read the previous books. Those who have get the bonus of seeing characters they’ve already met.

Piggybacking off the question I just asked, are your past series related to the Fear Chronicles in some way? If so, how so?
All of my series happen in the same universe. One of my series, The Agency, is about a secret government agency that monitors people with powers as well as threats from space. Kind of a cross between Men in Black and X-Men. As Rena will learn, her dad once worked for this agency.

What draws you to writing?
For me, it’s more about telling stories than writing. I have so many ideas and sometimes feel overwhelmed at not being able to finish what I’ve started fast enough.

I think I read somewhere that you are now done with writing. Is this true?
I’ve considered stopping. Each time I do, new characters appear in my head and I can’t stop thinking about them until I write down the story. Writing is an exorcism of sorts for me.

C.C. thank you so much for taking the time to answer some questions for me.
Thanks for inviting me to the Read Your Writes Book Reviews blog!

Enjoy and excerpt from Fear Justice:
Tony cleared his throat. “You said your dad was kidnapped?”

“Last night. Coach and my dad were friends. They joined the Army together.” Why was I babbling? Tony didn’t need to know my life story. “I showed up this morning because I thought he might know why these people were after my dad.”

“Did either of them tell you?”

I shook my head and looked at Tony. “The man who beat up Coach Andrews—he said he’d give me a head start before hunting me down.”

Again, Tony glanced in the mirror. “He didn’t happen to say he drives a black Lincoln, did he?”

As I spun in the seat and leaned over the headrest to see, the belt cut into my neck. Behind us, a black car crept closer with every second. Someone in the passenger seat leaned out of the window with a gun. “There’s a man with a gun following us and I’m not freaking out. At least, I don’t think I am.”

With a bitter laugh, I turned back around and dropped down on the red vinyl seat. “Cool? When are you going to ask why I’m not afraid?”

Tony hit the brakes and made a turn that left me choking from the belt’s grip. “Right after you ask why I picked you up.”

C.C. Bolick grew up in south Alabama, where she’s happy to still reside. She’s an engineer by day and a writer by night—too bad she could never do one without the other.

Camping, fishing… she loves the outdoors and the warm Alabama weather. For years she thought up stories to write and finally started putting them on paperback in 2006. If you hear her talking with no one to answer, don’t think she’s crazy. Since talking through her stories works best, a library is her worst place to write… even though it’s her favorite!

C.C. loves to mix sci-fi and paranormal—throw in a little romance and adventure and you’ve got her kind of story. She’s written nine books including the Leftover Girl series, The Agency series, and The Fear Chronicles.