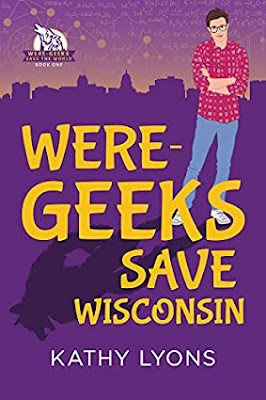 When badass werewolves battling supernatural evil realize they need tech support, they recruit a group of geeks with hilarious—and romantic—results.

Chemist Josh Collier is having a blast at a comic book convention when he gets the shock of his life—he’s a werewolf! WTF? Before he can howl, he’s whisked away to a secret lair by Nero, a hot guy dressed as a Roman centurion. Josh’s former life is over, and his genius is needed at Wulf, Inc.

Nero has no interest in babysitting a trainee were-geek when he’d rather be killing the demon that wiped out his entire pack. While Josh analyzes the monster’s weapon, wild passion ignites between him and Nero.

With destiny and their pack in the balance, can they survive the demon out to destroy Wisconsin?

Were-Geeks Save Wisconsin is the first book in Kathy Lyon’s Were-Geeks Save the World series. I’ll be honest and say I don’t know where to start with this book. I thought this story was going to be a romantic comedy. I mean, look at the cover. There are some hilarious moments, but this story was so much more.

When Nero Bramson’s werewolf pack is killed attempting to slay a demon, the powers that be at Wulf, Inc. know they need serious brainpower to fight fire with fire. Nero and his counterpart Wizard are tasked with finding uber-smart humans who just so happen to carry latent werewolf DNA.

Nero’s search leads him to Joshua Dyer Collier, a Ph.D. student at the University of Michigan. Josh is a chemist. He’s a thinker and research is what he does best. Josh is also just now starting to realize he's gay. The fact that Josh finds out he's a werewolf as he starts to shift makes Were-Geeks Save Wisconsin an interesting read.

There's so much going on with the story. A majority of the book deals with Josh and him accepting his new life of being a werewolf. You also get the love story of Josh and Nero. And you have Nero with his fixation on traveling back in time to save his team. The beginning of the story is a little slow and odd, as you are introduced to a strange character who somehow will worm his way into your heart.

Were-Geeks Save Wisconsin wasn’t anything like I expected. It was a fun read that kept my attention while trying to figure out what was going to happen. I should warn you. Nero and Josh have their HEA or HFN by the end of the book. However, Kathy did something pretty incredible resulting in the story ending in a cliffhanger. I should probably be upset by this but I'm not. I'm more amazed by the fact that she was able to add surprise after surprise to the story that resulted in the cliffhanger. I'm definitely looking forward to the next book in the series, Were-Geeks Save Lake Wacka Wacka.

The Were-Geeks Save the World Series:

Kathy Lyons is the fun, contemporary side of USA TODAY bestselling author Jade Lee. She loves sassy romance with lots of laughter and sex. Spice is the variety of life, right? Okay, so maybe two kids, two cats, two pen names, and writing over 50 books has messed with her mind, but she still keeps having fun.

Or hang out with her sexy historical half, Jade Lee. Titled heroes with dark secrets are Jade's passion. Especially when they fall for women who add more than just spice to their lives.