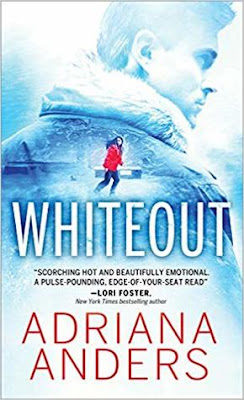 With a storm coming and a killer on the loose, every step could be their last...

Angel Smith is finally ready to leave Antarctica for a second chance at life. But on what was meant to be her last day, the remote research station she's been calling home is attacked. Hunted and scared, she and irritatingly gorgeous glaciologist Ford Cooper barely make it out with their lives...only to realize that in a place this remote, there's nowhere left to run.

Isolated with no power, no way to contact the outside world, and a madman on their heels, Angel and Ford must fight to survive in the most inhospitable—and beautiful—place on earth. But what starts as a partnership born of necessity quickly turns into an urgent connection that burns bright and hot. They both know there's little chance of making it out alive, and yet they are determined to weather the coming storm—no matter the cost.

Whiteout was a very intriguing and action-packed book. I was drawn in from the very beginning and couldn’t stop reading. The characters were very well written and I thoroughly enjoyed all of the plot twists. Adriana Anders did an amazing job of telling a believable story with intensity and a whole lot of peril.

Whiteout is about a very awkward glaciologist named Ford Cooper and a beautiful, passionate cook named Angel Smith. They are both working in Antarctica at a research station doing what they both love. However, they both have had some challenges in their lives that they have yet to let go of. Although Ford has been very attracted to Angel since she arrived, his attempts to keep her at bay have given her the impression that he hates her and her cooking. When danger arrives, they create an alliance that goes way beyond survival. With an extraordinary display of determination and training, Ford and Angel do whatever it takes to keep each other alive and to eliminate the threat to them and their other team members.

Of course, in a book like this one, there are your usual bad guys. There’s a chase, shootout, bombs, etc. Plus, there are two people that are forced to dig deep into their souls to fight against all of the elements that one of the coldest places on the planet has to offer. The imagery was remarkable and I really felt like I was trying to push through it all right along with them. Ford and Angel rose to the occasion more often than not. They took care of each other and wouldn’t let the other give up. They were inspiring. They were also scorchingly hot between the ice-cold sheets. As the action intensified so did their attraction to each other. Indeed, some of the storyline was predictable but it didn’t take away from the overall pace of the book. I look forward to reading the next book in the series and hope that it picks up exactly where we left off.

You can read an excerpt from Whiteout here.

Adriana Anders has acted and sung, slung cocktails and corrected copy. She’s worked for start-ups, multinationals and small nonprofits, but it wasn’t until she returned to her first love—writing romance—that she finally felt like she’d come home. Today, she resides with her tall French husband, two small children and fat French cat in the foothills of the Blue Ridge Mountains, where she writes the dark, gritty, emotional love stories of her heart.