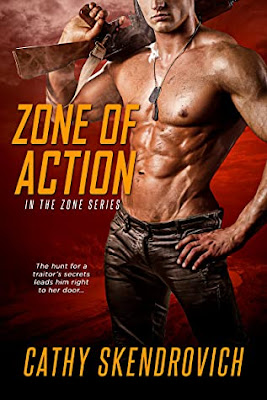 Zone of Action (In the Zone, #1)
by: Cathy Skendrovich
Series: In the Zone

The hunt for a traitor’s secrets leads him right to her door...

Former terror cell expert Audrey Jenkins has seen enough death and destruction to last a lifetime. When she uncovers her ex, Brett, a higher-ranking officer in her unit, selling military secrets, she turns him in and returns to the simpler life she has embraced since leaving the army.

CID Special Agent Cam Harris is a career military man with a strong sense of duty. When a military prisoner who once saved his life in Afghanistan escapes while in his custody, he requests the assignment to track him down.

Cam's manhunt leads him to Audrey's door. His prisoner—her ex—will resurface here, he’s sure of it. The feisty woman wants nothing to do with hunting down her ex, but when a terror cell she’s all-too-familiar with launches a deadly attack on army intelligence soldiers and officers, she knows it’s Brett.

Helping Cam is the right thing to do. But the attraction burning between them may be the mistake that gets her and Cam killed...

Zone of Action is the first book that I have read by Cathy Skendrovich and I was not disappointed. This book was full of plenty of action and suspense, not to mention plenty of steamy sex. The main characters had great chemistry and were very likable. More importantly, the story was actually very realistic. It was something straight out of an NCIS episode.

When Army Criminal Investigation Department Agent Cameron Harris is tasked with escorting his former best friend/ex-soldier turned traitor Brett Gates to Leavenworth, Cameron finds himself in the middle of a terrorist plot that takes him across the country and right into the arms of Brett’s ex-girlfriend Audrey Jenkins. Audrey, who just so happened to have been integral in getting Brett convicted, ends up being put in danger after Brett escapes his prison transport. As a much larger plot begins to unfold, Cameron and Audrey have to use all of their military training and resources to try and prevent an act of domestic terrorism that they are sure is on the verge of being committed by Brett and whoever he is working with. Of course, spending so much time together brings their attraction to the surface. Cameron and Audrey have a really intense spark and their time in the bedroom is very much explicit and explosive.

I really enjoyed Zone of Action from beginning to end. Audrey may have retired from the military but she was very much a soldier in her own right. Cameron was the epitome of GI Joe but also showed his vulnerable side. The two of them made for a great team and nothing about their relationship seemed forced. They seemed to have been meant to be together and will surely have a great future. I look forward to reading other books by Cathy Skendrovich. She has gained a new fan.