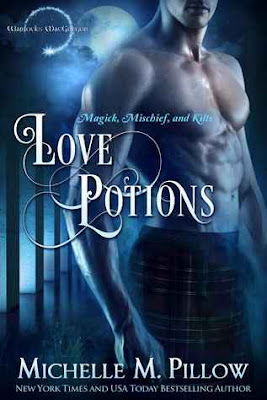 "A mesmerizing and magical read!"

From the Highlands of Scotland to the valleys of Wisconsin…

Erik MacGregor is from a line of ancient (and mischievous) Scottish warlocks. He isn’t looking for love. After centuries of bachelorhood, it’s not even a consideration… until he moves in next door to Lydia Barratt. It’s clear the beauty wants nothing to do with him, but he’s drawn to her and determined to win her over.

The last thing Lydia needs is an alpha male type meddling in her private life. Just because he’s gorgeous, wealthy, and totally rocks a kilt doesn’t mean she’s going to fall for his seductive charms.

Humans aren't supposed to know about his family's magic or the fact he's a cat shifter. It's better if mortals don't know the paranormal exists. But when a family prank goes terribly wrong, causing Erik to succumb to a love potion, Lydia becomes the target of his sudden and embarrassingly obsessive behavior.

They’ll have to find a way to pull Erik out of the spell fast when it becomes clear that Lydia has more than a lovesick warlock to worry about.

Warning: Contains yummy, hot, mischievous MacGregors who may or may not be wielding love potion magic in an effort to prank their older brother, and who are almost certainly up to no good on their quest to find true love.

Hi, Michelle. Thank you for joining me today.
I'm excited to be here!

First of all, I have to tell you that I LOVE the book cover for Love Potions. Does the book take place in the present-day?
Yes. The book is set in modern day Green Vallis, Wisconsin.

Tell me something about the book that isn't in the blurb.
One of the uncles has an out of breath English bulldog dressed in tartan plaid named Traitor (cause he's English).

Okay. That’s funny. Tell me about Erik and what are some things you LOVE about him?
His heart. His love for his family is beyond anything. He can be a bit overprotective of the MacGregor women, and I do feel very sorry for his sister who has the magical equivalent of a clan of men holding shotguns behind her whenever she tries to go on a date. But Erik's heart is in the right place.

I’m loving him already. Tell me about Lydia and what are some things you LOVE about her?
Erik has been around awhile and had probably had women telling him how awesome he is for the last century. So the confidence level on that one is pretty well ingrained. He's also not above taking magical shortcuts when it comes to seduction (nothing sleazy). I love that Lydia puts Erik in his place and makes him grovel a bit. She definitely makes him work for it.

This book sounds so good! I have to tell you, I got REALLY excited when I read the book blurb. My first thought was, "I SO want to read this book!!!" Then my second thought was how many big beefy drop-dead-gorgeous men are there going to be in the book. So how many men are we talking about?
The MacGregors are a huge family. They're a clan of Scottish warlocks, practically immortal. Erik has four brothers and a sorely outnumbered sister. Plus one of his many sexy male cousins makes an appearance. And if you like a little crazy with your men, there's a single uncle still hung up on a girl who tried to steal his magic and left him a crazy bachelor. Yeah, small-town Wisconsin is about to be invaded by Scots.

Thank you for taking the time to answer some questions for me.
Thank you so much for having me.

“Ly-di-ah! I sit beneath your window, laaaass, singing ’cause I loooove your a—”

“For the love of St. Francis of Assisi, someone call a vet. There is an injured animal screaming in pain outside,” Charlotte interrupted the flow of music in ill-humor.

Lydia lifted her forehead from the kitchen table. Her windows and doors were all locked, and yet Erik’s endlessly verbose singing penetrated the barrier of glass and wood with ease.

Charlotte held her head and blinked heavily. Her red-rimmed eyes were filled with the all too poignant look of a hangover. She took a seat at the table and laid her head down. Her moan sounded something like, “I’m never moving again.”

“You need fluids,” Lydia prescribed, getting up to pour unsweetened herbal tea from the pitcher in the fridge. She’d mixed it especially for her friend. It was Gramma Annabelle’s hangover recipe of willow bark, peppermint, carrot, and ginger. The old lady always had a fresh supply of it in the house while she was alive. Apparently, being a natural witch also meant in partaking in natural liquors. Annabelle had kept a steady supply of moonshine stashed in the basement. If the concert didn’t stop soon she might try to find an old bottle.

Erik had been singing for over an hour. At first, he’d tried to come inside. She’d not invited him and the barrier spell sent him sprawling back into the yard. He didn’t seem to mind as he found a seat on some landscaping timbers and began his serenade. The last time she’d asked him to be quiet, he’d gotten louder and overly enthusiastic. In fact, she’d been too scared to pull back the curtains for a clearer look, but she was pretty sure he’d been dancing on her lawn, shaking his kilt.

“Omigod,” Charlotte muttered, pushing up and angrily going to a window. Then grimacing, she said, “Is he wearing a tux jacket with his kilt?”

“Don’t let him see you,” Lydia cried out in a panic. It was too late. The song began with renewed force.

Since the damage was done, Lydia joined Charlotte at the window. Erik grinned. He lifted his arms to the side and kicked his legs, bouncing around the yard like a kid on too much sugar. “Maybe it’s a traditional Scottish dance?”

Both women tilted their heads in unison as his kilt kicked up to show his perfectly formed ass.

“I know. He doesn’t,” Lydia answered. Damn, the man had a fine body. Too bad Malina’s trick had turned him insane.