Review ~ FALLING AGAIN FOR THE SINGLE DAD by Juliette Hyland 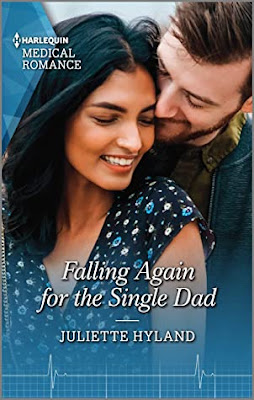 Fatherhood has changed him—

But can she risk her heart?

ER nurse Amara Patel is starting over. Running into her ex, physician Eli Collins, on her first day at Boston General throws a major wrench in the works! Because despite his still irrefutably sexy appearance, he’s not the Eli she remembers. He’s always put work first, but now that he’s bringing up his niece, everything’s changed—except his and Amara’s feelings for each other! Dare Amara allow herself a second chance at love?

Juliette Hyland is a new to me author. I loved the sound of Falling Again for the Single Dad. I mean who can resist a doctor who’s also a single father? Plus, the story is a second chance romance.

Nearly ten years ago, Amara Patel and Eli Collins were hot and heavy. The two were on the same page and had their future together planned out. They would both work in an ER, eventually marry and have a family. They would be sure to make time for themselves and each other, and not be like their parents. When Eli’s father, who happens to be one of the best heart surgeons in the country, informs Amara that Eli is going to become a heart surgeon like him, she knows that Eli will cave into his father’s demand, just to please him. “Are you willing to give up your dreams of working in the ER to be the best surgeon? Are you willing to give up my dreams?” Instead of putting a smile on her face, enduring countless vacations and dinners alone like their mothers, Amara leaves, telling Eli, she won’t become someone who wastes away and is cast aside.

Fast forward ten years and a lot has changed for Eli and Amara. Their parents are no longer together. Eli’s mother realized how miserable she was in her marriage and divorced Eli’s father. Amara’s mother passed away from breast cancer and died with only Amara by her side because her husband was too busy chasing his next big business deal. Eli’s brother and sister-in-law have both passed away and named Eli as the guardian of his almost two-year-old niece, Lizzy. Amara has had her own life struggles and battles, resulting in her taking a job as an ER nurse at Boston General. Since their breakup, neither Eli nor Amara have kept tabs on the other. So it is a surprise to run into each other in the ER, where Eli is the head doctor. One thing for certain is that these two never forgot the other, and their attraction is just as strong as ever.

I liked Eli and Amara together. I loved the way Eli truly paid attention to Amara, especially to the things she didn’t say. I liked the times you saw them together with Lizzy. I just wished there was more family time together. It seemed as though Lizzy was always shepherded off to be with her grandmother. While Eli has changed, he still yearns to be acknowledged and accepted by his father as his son and the good, if not great doctor he is. The issue as to why Amara broke up with Eli the first time resurfaces. What I didn’t like was how Amara came across, in my opinion, as thinking she was wrong to want to be put first or second behind Lizzy. I felt that went against everything she wanted and knew she deserved.

While I wasn’t blown away by Falling Again for the Single Dad, I did like Juliette’s writing voice. I’m definitely looking forward to reading more books from her.

~ Favorite Quotes ~
“Imperfections are what make us special.”

“Life is too short not to reach for every good opportunity.”

“Life can be funny and tragic at the same time. But you can’t enjoy life if you’re constantly worrying about what might go wrong. You’ll go nuts.”

Juliette Hyland began crafting heroes and heroines in high school. She lives in Ohio, USA, with her prince charming, who has patiently listened to many rants regarding characters failing to follow the outline. When not working on fun and flirty happily ever afters, Juliette can be found spending time with her beautiful daughters, giant dogs or sewing uneven stitches with her sewing machine.