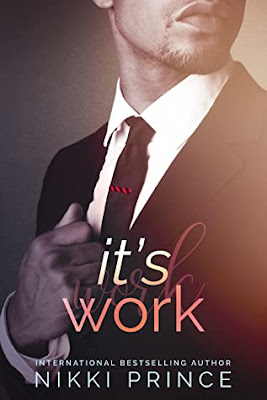 She knows her heart is at risk

Professor Âine Reid has crushed on Darian Tisdale since college. She succumbed to his sexy charms more than once, but when he made it clear he only wanted friends with benefits, she friend-zoned him, no benefits on offer. Now co-workers up for the same tenure track promotion, Âine has more reason than ever to keep Darian at arm’s length. He tempts her like no other, but she values his friendship too much to take another risk with her heart.

Can he prove that he’s changed?

Darian knows he hurt Âine long ago. He wants to prove that he’s now ready for more and to take their friendship to the next, more permanent and sexy level. He thinks she feels the same except when she signs up for a dating site, Darian knows he has his work cut out for him. He’s all in for the challenge except there’s the career making promotion they are both up for.

Can their friendship and sizzling chemistry combust to create a win-win for them both?

Hi Nikki. Welcome to Read Your Writes Book Reviews. How are you today?
Hi! Thank you so much for having me! I really appreciate it. Today, I’m feeling really good, just relaxing right now at home and watching my favorite ID channel shows.

You are a new to me author. What can you tell me about yourself?
I am a single mother of two teens, I’m a gamer (I play World of Warcraft, The SIMS, Call of Duty as well as some mobile games). I love to read mostly romance but I also read nonfiction, horror, science fiction, and fantasy. I’m also a lover of music with a wide range of tastes from Classical, 60’s, 70s, 80s, K-Pop…etc. I love good movies, though oddly I’m just now getting into romantic Christmas movies. I prefer Horror, Sci Fi, Action Adventure, and Comedies along with musicals.

Wow. You’re ALL over the place with your likes. That’s pretty cool. What are some of your favorite tropes to write and why?
My favorite types of tropes to write are usually friends to lovers, enemies to lovers, tropes with younger men/older women. I think I love those kinds of tropes because there is a lot of angst that can be pulled from the situations that they find themselves in. The push and pull that the characters feel emotionally is extremely attractive to me.

How do you come up with names for your characters?
I am a lover of names. I had my two children named by the time I was three months pregnant. LOL. I usually will have an idea for a story so then I will go online and look up names or use baby naming books. It really all depends on how the characters are speaking to me.

It’s Work is your latest release, and is part of your Undeniable series. What can you tell me about the book and the series?
The book is basically a new adult romance with 6 friends becoming partners because the three women in the stories decide they are tired of looking for love and just want a relationship that gives them the benefit of sex. Why not their mutual best friends. So, each book is a pairing off of one female friend with the male friend she fancies. In It’s Work Áine and Darian are both college professors. Áine at first agrees to the friends with benefits but finds herself on the fence about it when she realizes she really wants a relationship. There is also the fact that her and Darian are vying for the same faculty position at the college they work at.

Tell me more about Áine Reid and Darian Tisdale. What are they like? What attracts them to one and other?
They both have a love for the written word, so they have that commonality. They met in college and used to study with one another so that they could become college professors. Áine is the more serious one and Darian is more laid back which comes into play in the book.

Can you tell me about one of your favorite scenes from It’s Work and why you count it as a favorite?
One of my favorite scenes in the book is when Darian confronts her in her office. The tension for me was at an optimum cause they’re in their place of work and he’s letting her know he knows she wants him as much as he wants her.

Oh. That sounds good. What are you currently working on? What other releases do you have in the works?
I’m currently working on a few things. I want to get a Christmas story out, along with working on the third book in the series called, It’s Real (Royce and Emmeline’s story), and a few other things in the works. Always working and writing because this has been my dream since I was 11 years old.

Congratulations on fulfilling your dream. Nikki, thank you for taking the time to answer some questions for me.

Late Last Summer at the Cabin
“Going to keep acting like the attraction between us doesn’t exist?” Darian had leaned in close and whispered in her ear.

She’d turned to him with a self-satisfied grin on her lips and laughed softly. “Dar, just because they’re fucking, you think it means we have to?”

“For the hundredth time, I don’t want to fuck you. I won’t fuck you. So, stop fucking asking.”

“You protest way too much, so I’m so not convinced by anything you say.”

“You’re not because then you can ignore what is obvious.”

“What’s obvious is that you want me. I see it in your eyes every time you look at me.”

“You’re holding up the game. Either kiss or get back to the game.”

She’d heard the others laughing and then Áine had dropped the cards from her hand and stood and looked down at Darian. “Coming?”

“Not yet, but I definitely plan to.”

“Any more bad puns and you won’t be coming at all. Come on, Captain Obvious. Let’s get this over with so you can see it’s a mistake.” He’d stood and took her hand in his and tugged her towards the bedroom to a collective oooh sounding through the living area. Darian glared at them and they’d laughed, and he’d turned and looked at her.

“Are you just doing this because of the others?” Darian had asked as they walked down the darkened hallway.

“I don’t do anything because of peer pressure. You’re right. We have danced around but I’m going to show you why it was a necessary thing.”

Darian had tugged her close pressing her against the wall. “You want me and I want you. What’s wrong with that?”

“There are two things wrong.”

“What are those two things?”

“One, we work together. That will make things awkward if this goes south.”

“I think you’re worried about something that will never happen. Plenty of our colleagues are in some type of relationship. Next excuse?”

“And if we do this you will want more, I’m that addicting. I don’t want more than a casual fuck. You wouldn’t know how to do it with me as your friend.” She’d told him.

Just as she’d been about to say something Darian kissed her. She couldn’t push him away and, in fact, she hadn’t wanted to. The thrust of his tongue had invaded her mouth, making her weak in the knees as she wrapped her arms around his neck kissing him back. He’d nipped her bottom lip and pulled back.

“Addicting is right. I’m not dissuaded if that was your idea.”

“I didn’t say we didn’t have chemistry. I just don’t think it’s a smart thing to pursue.”

“Why?” She wanted him; it was written all over her face. Why would she deny them what they wanted?

“Why, because no matter how much we want each other there is a slim line between love and lust. You may think you can stop yourself from falling in love with me, but it isn’t possible.”

She’d leaned up and kissed him hungrily then pressed her hands against his chest and moved away from him heading back to the others. She’d sat back in their spot and had patted the couch, indicating he could still sit with her. She’d been playing roulette that whole time they’d spent at the cabin, that kiss in the hall the catalyst for later that night when she could not dodge anymore. It had been beautiful and more than she could have ever asked for. She’d been reminded that night of the man she’d met in college. Who she would stay up with and talk about Maya Angelou, Shakespeare, and other literary greats.

Nikki Prince is a mother of two, who's always had a dream to be a published author in the romance genre. Her passion lies in raising her children as readers, gaming, cooking, reading, and her writing. Her belief is that "love is love" and that everyone should see themselves mirrored in the pages of a romance book. Nikki Prince truly believes that love is colorblind and gender-less.