Review ~ FALLING FOR THE SECRET PRINCE by Alison Roberts 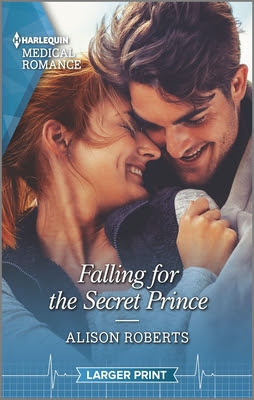 Revealing his past…
is a risk worth taking!

Dr. Dom di Rossi’s world literally crashes through the ER doors when his father, the king of Isola Verde, is involved in a car crash. Until now, Dom’s royal connection has been carefully guarded. But when Dr. Emilia Featherstone, his old medical school rival, recognizes a previously unseen vulnerability behind his delicious eyes, she unintentionally becomes the keeper of his secret—and his heart!

“It was every doctor’s worst nightmare to have members of their own family brought into an emergency room.”

Dr. Dom di Rossi is a secret prince. He has somehow managed to keep his true identity under wraps for years. In doing so, he’s moved to the United States, gone to medical school, and became Head of the Emergency Department at Seattle General Hospital. His dream life and his destiny collide when his father, sister, royal driver, and bodyguard are rushed into the ER after an accident that could have killed them all. Dom knew his family was coming for a planned surgery for his father, but he has no idea why they’re weeks early.

Emilia Featherstone and Dom go back years, to their time in medical school. However, neither truly knows the other. Emilia doesn’t know Dom’s past, or that he’s a real prince. Dom doesn’t know that Emilia would give anything to have a family and a place to call home.

When Dom finally tells Emilia his truth, she isn’t happy that he lied about himself to her. But she knows he needs a friend and while they’ve never been friends, she’s willing to be there for him. Soon, their attraction takes over and against their better judgment, they fall in love.

Alison Roberts is a new to me author. I loved everything about Falling for the Secret Prince. I read the Royal Christmas at Seattle General series out of order, reading Neurosurgeon’s Christmas to Remember by Traci Douglass first. The stories take place almost simultaneously. When I saw Dom and Emilia on page together, I knew I had to read their story. Alison has written great characters and managed to put in fun moments that leave you laughing. She’s managed to pull at my heartstrings and make me sigh. I’m definitely looking forward to reading more books from her. And I can’t wait to see how the rest of this series unfolds.