Feature Spotlight & Giveaway ~ FOR THIS CHRISTMAS ONLY by Caro Carson 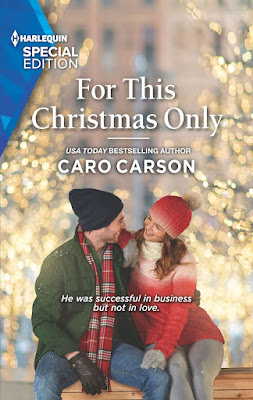 His book changed her life…

But he no longer believes his own advice.

After nearly dying in a plane crash, business icon Eli Taylor has become a recluse, until a chance encounter at a small town’s Yule log lighting leads to an evening spent as the fake boyfriend of his superfan Mallory Ames. When she finds herself homeless for the holidays, he invites her to stay with him—if she’ll return the favor and be his fake girlfriend, so he can show his siblings what a loving partnership should look like. Their arrangement will end when the new year begins…or will it?

Mallory returned the intimidating man’s scoff with one of her own. “That’s an incredibly high opinion you have of yourself. You’re certain that being seen just standing next to you is enough for a woman to make any man jealous.”

Finished straightening his cuff, he crossed his arms over his chest once more.

Mallory crossed her arms over her chest, too, but not to imitate him. She just wanted to tuck her hands under her arms for warmth. The Yule log burned brightly, but it was too far away to warm the night. “It’s more likely a man would feel sorry for the woman standing next to you, with the way you’re giving her the silent treatment.”

“I’m not giving you anything.”

“You walked up to me for a reason,” he said, still watching the fire. He had yet to spare a glance for the peon beside him. “It wasn’t because you had a sudden desire to talk about the weather. Then you leaned on me instead of a hay bale to get the sand out of your boots, yet you didn’t take them off. You barely bothered to brush off one. It’s obvious that you wanted someone to see you touching me. Once he did, you stopped. We’re done. Take your sandy boots elsewhere.”

Her mouth fell open at his rudeness.

After a moment of silence, he spoke again, sounding weary. “Did you think you were the first woman to try this with me?”

She didn’t bother trying to hide her frustration. “You know, if I could help out another woman just by letting her stand next to me for a few minutes, I would. I have, more times than most men seem to believe is possible. All you had to do was say, ‘Nice weather. Not too chilly.’ That was all that was being asked of you.” She raked her gaze over his oh-so-casual, oh-so-expensive clothing, from his shoulders to his boots. “Would it have hurt you to spare so little?”

At last, a reaction: he clenched his jaw. “You want someone to think you have a male protector?”

She blinked. “That’s kind of a medieval way to put it, but yes.”

He finally looked down at her. His eyes were silver, startling—a mirror that reflected the flames. In one smooth motion, he uncrossed his arms, placed his hands on her waist and picked her up high enough that her head and shoulders were above his. She squeaked in surprise and grabbed his shoulders for stability, but he dropped her onto the stack of hay bales, leaving her sitting five feet off the ground with hay poking her rear right through her jeans.

Oh, she didn’t have to fake an argument now. “What are you doing?”

“You wanted safety. Done.” His gaze dropped to her feet as they dangled above the ground like a child’s. “And your boots won’t get any sandier.”

She threw her hands up. “Now I’m sitting up here where anyone I’m trying to avoid can see me. All you had to do was act like I’m your girlfriend, not a bale of hay. Really, was that so difficult for you? Really?”

The fire framed him from behind. It gave him a dark-angel kind of appeal, a sinfully handsome Lucifer with striking eyes. She glanced toward the last spot she’d seen the annoying trio of guys—they'd stopped and were huddled over one glowing cell phone screen—and back at him.

He turned around. She thought he was going to walk away, but instead, he leaned back against the hay bales. Her stack of hay bales—so she wriggled back and pulled her right knee out of his way. He rested against the hay bale, its edge just below his shoulder blades, which meant she now was sitting with a man’s shoulders between her knees.

Mallory gaped at the back of his head.

She stopped. But what, really? With his shoulders between her knees, it certainly looked as if they knew each other well.

Fine, then. She rested her forearms on top of his head, like he was that executive desk she’d have someday.

“What,” her desk asked, sounding furious, “are you doing?”

“You’ve never had a boyfriend, have you?”

She stuck out her tongue at the top of his head. “You’ve never been one, have you? You seem to think sticking me on a pile of hay bales and turning your back on me is a normal thing to do on a date, but let me tell you, it’s not.”

He spoke through gritted teeth. “There wasn’t time to buy you flowers. How much longer is this date going to last? It’s like having a large bird nesting on my head.” 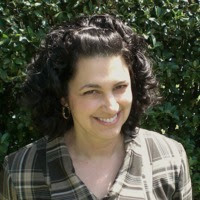 Despite a no-nonsense background as a West Point graduate and U.S. Army officer, Caro Carson has always treasured the happily-ever-after of a good romance novel. After her military service, she worked in the healthcare industry with a Fortune 100 company, talking science with doctors who were rarely handsome bachelor Texans like the doctors in her books. Now a USA Today bestselling author and RITA™ award winner, Caro is delighted to be living her own happily-ever-after with her husband (who actually is a handsome Texan) and their two children. They live in the great state of Florida, a location which has saved the coaster-loving theme park fanatics a fortune on plane tickets.
Places to find Caro Carson:
Website | Facebook | Twitter | Goodreads | Instagram | Amazon Author Page

a Rafflecopter giveaway
Follow
Posted by Kim at 3:52 AM