Interview ~ FAIRYTALE CHRISTMAS WITH THE MILLIONAIRE by Jennifer Faye 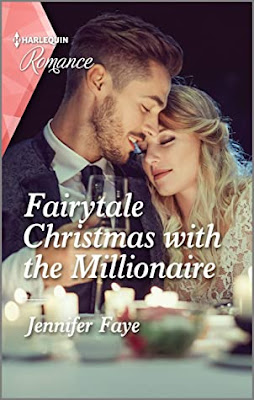 He thinks he has it all…

…until he meets his spirited Cinderella!

Under threat of eviction, Alina Martin finds herself making a deal with infamous CEO Graham Toliver. He may be used to getting what he wants, but Alina’s not going to back down. Yet as Alina gets to know Graham, she realizes that there is more to the charming CEO than she initially thought—could their arrangement lead to her happily-ever-after in time for Christmas?

From Harlequin Romance: Be swept away by glamorous and heartfelt love stories.

Hi Jennifer. Welcome back to Read Your Writes Book Reviews. How are you?
Hi. I’m so happy to be back here. I remember the huge excitement over visiting with you when I was just a debut author. I can’t believe that it’s been so long since my debut. And yet I’m still here doing what I love every day—creating happily-ever-afters.

I can’t believe it’s been seven years. That’s truly remarkable. Congratulations on your continued success. Let’s talk about your latest book from Harlequin, Fairytale Christmas with the Millionaire. What can you tell me about it?
It’s a modern day retelling of Cinderella. It was so much fun to write. The secondary characters are very colorful. And did I mention there’s a prince in the book? Well, it might be a ginger cat but his name is Prince and he’s adorable with lots of cattitude.

Lol. Can you please tell me about the characters of Alina Martin and Graham Toliver? Who are they? What are they like?
Alina Martin is now an orphan, whose step-mother and step-sisters can’t stand her. She’s learned to be independent and a go-getter. And she’s not about to back down when the hero, Graham Toliver, buys her apartment building.

Graham needs to prove to himself and his employees that he deserves the position of CEO. But he’s not only inherited the family company but he’s also inherited all of the financial problems that his father had caused. He has his hands full and the last thing he needs is a problem with the residents of the Stirling Apartments.

That’s definitely a spin on the traditional Cinderella fairytale. How do you come up with your character names?
Oh, well…hmm…I don’t really have a good answer. Names are organic to the characters. I might start with one name but find it just doesn’t fit the character and I change it. I might do that a few more times until I find the name that fits the characters.

What’s your favorite part of a romance book to write and why?
My favorite part to write is the HEA. It tells me a lot about the hero/heroine. And I just love seeing them happy and in love.

That’s interesting. Can you tell me about one of your favorite scenes from the book, and why is it a favorite?
Oh my! You don’t ask easy questions, do you?
Generally. No. 😃
There are a lot of them because this is one of my favorite books. One of my very favorites is when Alina’s fairy godfather comes to the rescue and then Alina shows up at the ball, catching the hero’s full attention. Sorry for the lack of details but you’ll have to read the scene to get caught up in the moment.

Not a problem. Wait. What? Nevermind. I’ll just be quiet. I think in the actual fairytale, that’s my favorite part. Can you tell me about the moment when Alina and/or Graham KNEW they were in love with the other?
Their feelings for each other grow throughout the book. Neither wants to admit to falling in love with the other because they think it’s hopeless as they want opposite things. But it’s at the Snow Ball, dressed in all of their finery, that their feelings can’t be denied any longer. As they dance together, their problems fade away and it’s just the two of them swept up in the moment.

I love that. Are there any fun facts about Fairytale Christmas with the Millionaire? If so, can you please share some?
Those all sound interesting and fun. Did you find any scene or scenes, in particular, to be hard to write? If so, can you tell me about it/them?
The opening scene is ALWAYS the hardest for me. There’s so much that has to go into it. You need to keep up the pace, introduce your characters and not stifle the flow with too much backstory. So it’s a bit of a hat-trick keeping the pace moving and inserting enough backstory to give context to what’s happening on the page.

And to be honest, no matter how much prep work I do for a book, I find that my characters are still holding back secrets from me. So I just have to keep writing and then go back to the beginning to fill in the information that my hero/heroine were reluctant to reveal at first.

I have to admit, I love it when characters don’t fully reveal themselves to authors. What can readers look forward to from you next?
I have a couple of projects in the works for 2021. One is a new duet from Harlequin, titled Wedding Bells at Lake Como. The first book in the duet is titled, BOUND BY A RING AND A SECRET. It’s a fake engagement between strangers that soon leads to so much more. The second book doesn’t have a title yet. I just turned it in. So I’m anxiously waiting for the title.

And I’m also working on an indie series. It’s going to be a clean and wholesome small-town romance, where everyone knows your name. I’m so excited about this series. More details to revealed soon.

It looks like you’re going to be very busy. Jennifer, thank you for answering some questions for me.

WHAT HAD HE been thinking?

He shouldn’t be here. Being a building manager was way outside of his skill set. How Alina managed it all plus her work at the café was truly impressive. Thankfully his very first job was really quite easy and no YouTube video was necessary. All it took was a few turns of the wrench.

Graham carried the red toolbox into the living room. “All fixed.”

“Thanks,” Mr. Merryweather said from his spot on his brown recliner, a sports station playing on the television while he held a book in his hands. “I used to be able to do those things but I can’t get down on my knees the way I used to.”

Mr. Merryweather gazed at him over his reading glasses. “You taking over the maintenance job from Alina?”

“Only temporarily. She’s busy working holiday parties at the restaurant.”

Mr. Merryweather nodded. “Glad to hear she’ll be back.”

“She always has time to talk.” Wasn’t that what he was doing now? Mr. Merryweather continued. “And she usually brings a treat?”

The man really thought he was going to take time out of his busy day to bake? Not a chance. “Sorry. I don’t bake.”

Mr. Merryweather’s face grew serious as his bushy white brows drew together. “Because you’re too busy kicking people out of their homes.”

Ouch. This man certainly wasn’t worried about pulling his punches. Was that why Alina had smiled when he’d told her who was on the phone?

Regardless, he still needed to get through to the man. “Mr. Merryweather, wouldn’t it be nice to get a new place? Maybe one where the plumbing is updated?”

Hmph! “The plumbing here is just fine. And the name is Merryweather.”

“That’s what I said, Mr. Merryweather.”

“Okay, Merryweather. I’m no expert but even I can see that the building needs some work.”

Right then Graham’s earpiece buzzed, signaling an incoming call. But whoever it was would have to wait. This conversation was important.

Merryweather frowned at him. “Just because things get old doesn’t mean they should be disregarded.”

Graham opened his mouth and then promptly closed it. He wondered what it’d take to get the man on board with the sale. Because Graham was beginning to realize he was going to have to win over the tenants one at a time.