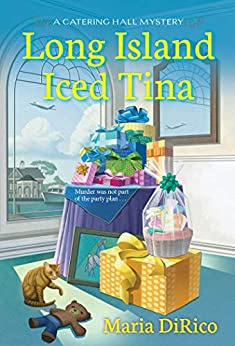 In the second installment of Maria DiRico's new Catering Hall Mystery series, Mia Carina is back in the borough of Queens, in charge of the family catering hall Belle View Banquet Manor, and keeping her nonna company. But some events--like murder at a shower--are not the kind you can schedule...

Mia's newly pregnant friend Nicole plans to hold a shower at Belle View--but Nicole also has to attend one that her competitive (and mysteriously rich) stepmother, Tina, is throwing at the fanciest place in Queens. It's a good chance for Mia to snoop on a competitor, especially since doing a search for "how to run a catering hall" can get you only so far.

Mia tags along at the lavish party, but the ambience suffers at Nicole's Belle View shower when a fight breaks out--and then, oddly, a long-missing and valuable stolen painting is unwrapped by the mom-to-be. Tina is clearly shocked to see it. But not as shocked as Mia is when, soon afterward, she spots the lifeless body of a party guest floating in the marina . . .

Good morning Mia. Thank you so much for agreeing to speak with me today.
Thanks for having me!

Before we get started, can you please tell me a little about yourself?
Sure. I work as the senior event planner and assistant general manager at Belleview Banquet Manor, a catering hall in Queens that my father, who is “associated” with the Boldano crime family, received as payment of a debt. I live upstairs from my nonna in Astoria, Queens, NY, and I’m single-ish.

Tell us about a defining moment in your life.
Oh, that’s easy. When a boat containing the body of my husband’s mistress – but not my husband – turned up at sea. This released me from being a “person of interest” in his disappearance and allowed me to move back home from Florida. The fact his body has yet to be discovered is why I’m single-ish.

What’s your most prized possession?
I would never refer to my cat Doorstop or my parakeet Pizzazz as possessions but I treasure both more than anything else in my life besides my family.

What are you enjoying most about staying with your nonna?
The food! Mama mia, is she a great cook! I’m kidding. Well, half kidding. I just love being with her. We’ve never spent this much quality time together and it’s really special.

Why do you feel the need to put on your sleuthing hat and investigate murders?
I probably wouldn’t except that so far, they keep endangering family members and our family business. That’s what inspires me. Making sure my loved ones don’t get tossed in jail for crimes they didn’t commit. They’ve spent enough time in jail for crimes they actually did commit!

Can you tell us a little of what we can expect from your latest story, Long Island Iced Tina?
Sure! It’s a fun one, I have to say. My friend Nicole is pregnant but under a lot of pressure because she has a mysterious stepmother who everyone hates – with good reason, it turns out. Anyway, a painting stolen twenty years ago suddenly reappears among her baby shower gifts, a body shows up floating in the marina, and suspects include poor Nicole’s father. Meanwhile, my nonna Elisabetta is going from one funeral to another trying to drop a pair of shoes into a casket because a friend’s husband appeared to her in a dream to say he was buried without shoes and needs a pair. BTW, this was based on a real story in my author’s family.

When you aren’t investigating murders, what do you like to do?
Relax! I’m always working. I like to kick back with a good book. Go for a bike ride. Maybe go into Manhattan and shop. And of course, eat whatever Nonna’s cooking!

What do you think about your creator Maria DiRico?
I think she should meet Ellen Byron. They’re a lot alike and would really hit it off!

What’s next for you?
I’m in a Christmas-themed book coming out in November: It’s Beginning to Look a Lot Like Murder. Wait until you read about all the crazy holiday decorations in my neighborhood!

Mia, thank you so much for your time.

Maria DiRico is the pseudonym for Ellen Byron, author of the award winning, USA Today bestselling Cajun Country Mysteries. Born in Queens, New York, she is first-generation Italian-American on her mother’s side and the granddaughter of a low-level Jewish mobster on her father’s side. She grew up visiting the Astoria Manor and Grand Bay Marina catering halls, which were run by her Italian mother’s family in Queens and have become the inspiration for her Catering Hall Mystery Series. DiRico has been a writer-producer for hit television series like Wings and Just Shoot Me, and her first play, Graceland, appears in the Best Short Plays collection. She’s a freelance journalist, with over 200 articles published in national magazines, and previously worked as a cater-waiter for Martha Stewart, a credit she never tires of sharing. A native New Yorker who attended Tulane University, Ellen lives in Los Angeles with her husband, daughter, and two rescue dogs.
Places to find Maria DiRico:
Website | Chicks on the Case | Facebook | Twitter | Goodreads | Amazon Author Page
You can follow the Long Island Iced Tina Blog Tour here.