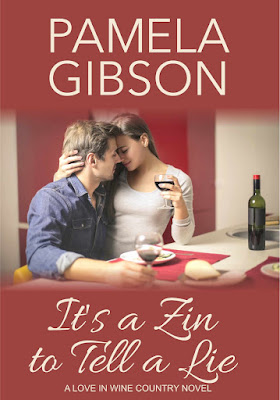 Emma Bradford, world class pianist, is tired of living out of suitcases and wants to change her career. When she returns to Napa to consider her options and play for a friend’s wedding, she discovers a nasty surprise. The man who called off their engagement two years ago will also be there and there’s no way to avoid him.

Antonio Reynoso is a dissolute playboy living on a Caribbean island. At least that’s what he’s let his family believe. He’s purposely stayed away so he won’t be tempted to break a promise and try to win back the only woman he’s ever loved.

But when he and Emma are unexpectedly thrown together during a violent storm, Antonio’s resolve begins to weaken and he wonders if leaving her had been a mistake. His wine country family says yes, and with a little well-intentioned meddling, he and Emma might just get a second chance.

It took every ounce of courage she possessed to walk over to where Antonio was sitting, the bottle of wine in her hand, aware of her pantlegs tightening with every step, the sway of her ponytail as it brushed her shoulders.

She swallowed several times before she reached him, noting again how broad his shoulders were and how tanned his face and arms. He looked up at her with those emerald eyes, and her stomach tickled like it had soft cotton balls floating inside.

The old line—one they’d often used when teasing each other—came out of her mouth without even thinking.

“No lies today. You’re brave to come out here and sit with me. And that’s the truth.”

She tried to smile, but it didn’t quite happen. “Everyone’s been treating me like I’m made of freshly blown glass. I tell them you and I are the past and we’ve both moved on. They don’t believe me.”

He seemed to be mulling over his response before he spoke. “They’re Reynosos. Emotional. Devoted. Protective of those they love. They’ve adopted you as one of their own. I’m the outcast now.”

She nodded, focusing on a few blades of grass at her feet. “Does it bother you?”

“I try not to think about it, so maybe it does. I miss this.” His arm swept out. “Family gatherings, and hearing about the progress made on Lindsay’s restored house, and Paige’s latest cabernet crop, and Aiden’s new venture as a small-town newspaper editor. I get my family news from Nana. She doesn’t judge.”

“She judges. She just doesn’t let on. Likes to tell people she’s omniscient.”

“And lovable. Don’t forget that.”

Her mouth did turn up at the corners then, she couldn’t help it. Nana was a safe subject, and one that invariably led to smiles.

“People are starting to notice us, Tony. Your mother is frowning and grabbing your Dad’s arm. They’re talking about us now. She keeps slanting glances our way.”

“Dad won’t turn to look, though. He’s stoic. He won’t let her come over here, either, and boy, does she want to.”

She held the glass up and Tony took it from her hand, a tiny zing of heat where their fingers touched. Damn. The chemistry was still there.

“Tell me how you are, Tony. Remember, this is just a friend asking.”

He handed the glass back to her and she refilled it, taking a sip. They often did this, sharing one glass of wine at dinner so the designated driver would be sober when they left.

“Too many wild island nights getting you down, huh?” She hadn’t meant to be sarcastic, but it slipped out. He’d hurt her so badly two years ago, she didn’t think she’d ever recover. But her music saved her. “Sorry.”

“I deserved it. How about you? Your career has taken off. Every time I talk to Nana, she tells me about another tour you’re on.”

“I love music. But the travel gets old. And I’m getting old without fulfilling my dreams.”

He turned to her and touched her face, gazing deeply into her eyes. “I thought a glittering concert tour was your dream.”

“And here I distinctly remember telling you it wasn’t. But some men never listen, do they?”

She brushed his hand off her face and stood. “I’ll leave you the bottle. Nice talking to you, Tony. Maybe your family will believe me when I tell them I’m okay with you being here.”

Filling her lungs with the cleansing air of a civil confrontation, she walked back toward the crowd, her eyes fixed on the golden leaves of an aspen tree. Awkward, but the conversation had to take place, and it needed to be done in full view of staring eyes.

She wanted to send a message. I’m okay. I’m good. I’m truly over him. And while a part of me can never forgive him, I can stand to be civil in a social situation.

But that would have been a lie.

She would never be over him. Every string of her soul tightened and vibrated at his touch.

And that was the truth.

Author of eight books on California history and twelve romance novels, Pamela Gibson is a former City Manager who lives in the Nevada desert. Having spent the last three years messing about in boats, a hobby that included a five-thousand-mile trip in a 32-foot Nordic Tug, she now spends most of her time indoors happily reading, writing, cooking and keeping up with the antics of her gran-cats, gran-dog, and gran-fish. Sadly, the gran-lizard went to his final reward. If you want to learn more about her activities go to https://www.pamelagibsonwrites.com and sign up for her blog and quarterly newsletter. Or follow her.
Places to follow Pamela Gibson:
Website | Facebook | Twitter | Goodreads | Amazon Author Page

a Rafflecopter giveaway
Follow
Posted by Kim at 5:16 AM