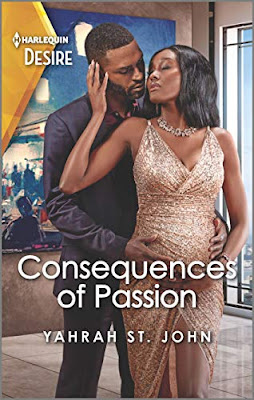 She promised herself just one night of passion with her best friend’s brother, but what happens next? Find out in this explosive launch to the Locketts of Tuxedo Park series from Yahrah St. John!

When a winning bachelor bid leads to unexpected consequences…

Psychologist Shantel Wilson surprises herself by attending a bachelor auction as a favor to her friend—and bidding on his older brother! The outcome of her steamy night with Roman Lockett, heir apparent to an Atlanta football dynasty? She’s expecting. Now Roman wants to claim her—and his child—yet Shantel needs more than a marriage of convenience from this man who put passion in her playbook…

Love triumphs in this uplifting romance, part of the new Locketts of Tuxedo Park series.

Why had he let his sister, Giana, convince him to attend this bachelor auction benefitting a cure for multiple sclerosis on a Saturday night? Because as the baby girl of the family, anytime she looked at him with those big brown eyes of hers, he was helpless to resist.

Roman’s mind, however, was still on the tense meeting he’d had yesterday. As chief operating officer and director of player personnel of the Atlanta Cougars football franchise, it was Roman’s job to handle all major player contract concerns. And securing DeMarius Johnson, the team’s star quarterback, was high on not only his list but his father, Josiah Lockett’s, the Atlanta Cougars owner and general manager.

Because of his impending fee agency, negotiations with DeMarius had dragged on for months. His father thought Roman incapable of finishing the deal, but Roman had come to the table prepared for battle. They’d had to void the final two years of DeMarius’s contract, allowing the Cougars to resign him while maintaining the league’s salary cap. It had been risky because it was already late January. However, Roman had known allowing him to become a free agent would be problematic and so he’d adapted the contract based on market factors.

Roman hoped his father would be proud of the win under his belt. He had been on a success streak in recent years with the talent he’d brought to the Cougars team. As a result, they were ranked fifth in the league and Roman had played a big role in that. Yet despite all his successes, his father never gave him his due. Because Roman was the oldest, Josiah Lockett was harder on him than on his younger siblings, Julian, Giana and Xavier.

He stood on the outer fringes of the vast oval-shaped ballroom with crystal chandeliers and white drapery and surveyed the elegantly dressed men and women. He caught a glimpse of Giana making the rounds to get everyone psyched up for the evening. She wore a one-shouldered canary yellow gown with a stunning diamond necklace. Her jet-black hair had been artfully cut shoulder-length with bangs. It was a different look for her, but she wore it well. Meanwhile, most of the men were shamelessly flirting in the hopes women would bid outrageously on them. Roman, however, didn’t need to work the room.

He was Roman Lockett and every woman in Atlanta knew he was heir apparent to the Atlanta Cougars franchise. And if they seemed not to, they were faking it. His parents had been a major presence in the community for three decades. He’d already been approached by several beautiful women who’d made blatant attempts at seduction, and when that didn’t work, they’d resorted to pouting or affected hurt, all in an effort to gain his attention. But tonight, none of them held any appeal.

Roman had no idea how he was going to make it through the rest of the night. Let alone a date with one of these insipid women. Until he saw her.

A caramel-skinned beauty in a blush-colored gown with spaghetti straps. It wasn’t as elaborate as some of the confections he’d seen other women in tonight, showing off their God-given assets. Instead, it might be considered modest. Then she spun away and Roman saw the dress plunged to a curvy bottom, leaving her back bare save for a skinny piece of fabric holding the straps together.

For the first time tonight, Roman was intrigued. She looked oddly familiar, but he couldn’t place her. Who is she? He had to know. He began wandering across the ballroom toward her, but was stopped by another bevy of beauties. When he finally managed to extricate himself from their clutches, Roman couldn’t find her.

His nose flared. She might be the woman he wouldn’t mind spending time with at the end of the evening. He prayed she would come back because only she could transform this night from being an abysmal failure.

Shantel Wilson was impressed with the image she presented. With her job as a psychiatrist she didn’t often get a chance to dress up for a fancy night out on the town. Her best friend, Julian Lockett, had begged her to come and bid on him at the bachelor auction so he didn’t take home some unsuspecting female.

“C’mon,” Julian had cajoled. “I need your help. After that unflattering article about my dating life, my mother is furious with me. She warned me she wouldn’t tolerate any more shenanigans and I agreed to keep a low pro- file. If you attend, she’ll know I’m keeping my promise.”

“I don’t have anything to wear to something that fancy.” Shantel had used any excuse she could to get out of the event. Her wardrobe was comprised of slacks, silk blouses and the occasional skirt.

“Don’t worry about that. I know some fancy boutiques in Buckhead.”

Shantel had rolled her eyes. “I’m not one of your girls, Julian. I can buy my own clothes.”

“I know that, but trust me, it will help make you feel more comfortable hob knobbing with the upper crust if you’re in a killer dress.”

And so she’d gone to the high-end boutique Julian suggested and hadn’t been disappointed. The sales women had been eager to help, especially when she mentioned she was attending the Lockett charity gala. They’d shown her dresses in all shapes and price tags in the hopes she’d choose the most exorbitant one. Instead, she’d opted for a simple blush dress in silk chiffon, which she could afford with her salary from the practice.

Shantel liked the way it hugged her slender curves, and with the built-in bra, she’d been able to forgo a bra thanks to her barely B-cup-size breasts. The sales clerk insisted she needed lingerie, four-inch stilettos to boost her five-four height and a clutch to finish her look. In the end, Shantel purchased the entire ensemble. Tonight she felt like Cinderella, except she wouldn’t be losing her slipper. The shoes alone cost eight hundred dollars.

She was perusing the room when her eyes caught sight of Roman Lockett. The eldest brother of the Lockett clan was tall with a commanding presence. He wore what was no doubt a custom-fit tuxedo like a suit of armor. A veneer of power clung to his athletic frame. To Shantel he was like no other man she’d ever encountered, but Roman never paid any attention to her on the few occasions she’d been in his presence.

Tonight he was clearly bored with his surroundings if the jaded expression on his face was anything to go by. Had he been coerced into attending tonight’s event? And where was Julian, anyway? He’d begged her to come tonight and bid on him, but he was nowhere to be found.

Her idea of a fun Saturday night was a hot bath, a glass of wine and streaming a Netflix movie, but when Julian had pleaded with her, she’d been powerless to resist. Ever since they met at a college party ten years ago, their friendship had been grounded in love and affection. Julian had been attending Morehouse while she’d been at Spelman. Their friendship endured her mother’s suicide and Julian’s many love affairs, but that didn’t mean he didn’t vex her.

Shantel stepped out of the ballroom, pulled her phone from her clutch and texted Julian.

She waited and saw three dots on her iPhone indicating he was typing a message, but then the text bubble went away. She was certain Julian had read her message, so why wasn’t he responding? There was no way she would have come tonight if it wasn’t for him. Large social gatherings weren’t really her thing. She thrived in one-on-one interactions. She supposed it was why she was so good at her job.

Having been raised on the farm and being a nerd, she’d always been socially awkward. College had been eye-opening for a simple country girl like Shantel. She’d been raised in a town where everyone knew each other, but in college she hadn’t understood the rules or the games people played. Sometimes Shantel wondered if she’d made the right choice and whether she’d ever find a man who truly got her.

She was so deep in thought, Shantel didn’t realize she had company until she looked upward and found Roman’s ebony eyes trained on her.

Yahrah St. John became a writer at the age of twelve when she wrote her first novella after secretly reading a Harlequin romance. Throughout her teens, she penned a total of twenty novellas. Her love of the craft continued into adulthood. She’s the proud author of thirty-nine books with Arabesque, Kimani Romance and Harlequin Desire as well as her own indie works.
When she’s not at home crafting one of her spicy romances with compelling heroes and feisty heroines with a dash of family drama, she is gourmet cooking or traveling the globe seeking out her next adventure.
Places to find Yahrah St. John:
Website | Facebook | Twitter | Goodreads | Pinterest | Instagram | Amazon Author Page