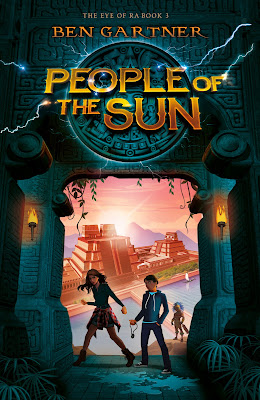 The explosive reveal about who John and Sarah really are and why they’re traveling through time, with their most gut-wrenching challenge yet.

In the time of the Aztec, a scoundrel named Cortés arrives and the kids are forced to make an extremely difficult decision: If you could change history, should you? For more twists, more danger, and more fun, read the third book in The Eye of Ra series, People of the Sun!

The following is adapted from the end of my book, People of the Sun, in the section “Author’s Note: Fact or Fiction?” Researching for all three books in The Eye of Ra series was immensely fun, hugely entertaining, and, as in the case detailed below, enlightening! I recognize my ignorance now, but before I did this book, I did not realize the Aztec were not originally native to central Mexico. But let me begin…

Specifically, the group commonly referred to as the Aztec (or the Aztecs) are the inspiration for the name of my book: People of the Sun. That is what some people refer to when speaking of the Aztec, or, more accurately, the Mexica (meh-SHEE-kah). This group is commonly defined as the people of central Mexico. But, perhaps even more accurately, we should call them the Nahuas, that is, “clear-speaking people” or those who spoke Nahuatl (see this article from David Bowles: http://bit.ly/not-aztecs). And what is noteworthy is that the Mexica weren’t originally from that area. They came down from the north on an epic quest that lasted centuries, searching for a sign seen in a vision, before they settled on an island in Lake Texcoco and built Tenochtitlan.

Relatedly, that vision was of an eagle with a snake in its beak, resting on a cactus. You may recognize that visual because it is on the flag of modern-day Mexico, among other places of importance. The Aztec people wandered until they saw that vision on an island in Lake Texcoco. There, they settled and built Tenochtitlan, on top of which is modern-day Mexico City.

However, back to the naming convention of Aztec. At the time, the various tribes of the area probably called themselves by their individual tribe names, and thus, there likely wasn’t any single categorization you could use to describe all groups. Note that the term “Aztec” wasn’t even coined until a couple of hundred years after the era itself!

The first written record of the “Aztec” term was published in 1780 by a Spaniard, but really popularized even later by a German explorer (http://bit.ly/aztec-name-history). Of course, it is arguably easier to just lump them all together and refer to them collectively as Mexica or Aztec, and so history has transcribed them as such.

But THIS, this point is why delving into the nooks and crannies of history can be so illuminating. If the Mexica didn’t call themselves the Aztec, what might we be called by distant future humans? Can you invent a term none of us call ourselves today?

One of the most famous collections documenting the people of central Mexico is known as the Florentine Codex. You can learn more about all twelve books (three volumes) at the World Digital Library (http://bit.ly/florentine-codex). Basically, a Franciscan missionary arrived in central Mexico about eight years after Cortés had done his dirty work. This missionary spent thirty years compiling interviews and gathering samples of the natives’ pictorial form of writing. On one side of the page, he included the native Nahuatl. On the other, he added his Spanish translation. The volumes contain almost 2,500 illustrations and document everything from religious practices to facets of daily life. It may very well be biased in some areas, but it is nonetheless a treasure trove of knowledge about the people of central Mexico five hundred years ago.

I don’t claim to have read the entire set, but I certainly went down a few rabbit holes letting my mind’s eye drift to a distant time and a culture different from mine. I hope my readers enjoy that ride too. And while they’re having fun with an action-packed story, maybe they even learn something in the meantime.

Thank you for having me on your blog! If people would like to learn more about me or my books, the best place to find me is my website:
https://BenGartner.com

My books are available wherever books are sold! Again, thanks for having me.

This was too weird, so it had to be happening for real. If it made no sense at all, then it had to be real. That was what John had come to expect of their life ever since he and Sarah entered that cave in Colorado and traveled back in time to the ancient Egyptian town of Saqqara. Then, later, traveled through time again, from the museum in Washington, DC, to the ancient Roman frontier town of Aventicum.

Abnormal was their new normal, and seeing these two people—if that’s all they really were, and not gods—speaking of Aten and telling them they were needed again . . . John shrugged. It had to be true.

Something in his bones told him: It has to be true.

He thought all this out before the earth trembled again, and he matched the stare of the older man. John’s hand reached to the pendant he always wore around his neck. The eye of Ra.

The tremor stopped and immediately John asked, “How d’we go back?”

The old man laughed. “Agreed. Some things never change.” He winked at the woman.

“If you are who you I think you are, then prove it.” Sarah crossed her arms and pivoted back to confront these strangers head-on.

“What exactly is going on here?” Aunt Lorraine asked. “Do you know each other?”

“That necklace isn’t what you think,” the old man said, looking at John fidgeting with his pendant.

John felt the warmth of the pendant on his chest. He could trace it in his sleep, and in fact had done just that many times in his dreams—over the brow, around the almond-shaped eye, down the arc with the curlicue finish, then the final straight line with the knifelike edge. The eye that could transport them through space and time.

Ben Gartner is the award-winning author of The Eye of Ra time travel adventure series for middle graders. His books take readers for a thrilling ride, maybe even teaching them something in the meantime. Ben can be found living and writing near the mountains with his wife and two boys.