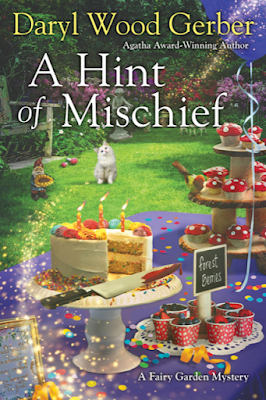 The proprietor of a fairy garden and tea shop in Carmel-by-the-Sea, Courtney Kelly has an occasional side gig as a sleuth--with a sprinkling of magical assistance....

Courtney has thrown a few fairy garden parties--for kids. But if a local socialite is willing to dip into her trust fund for an old sorority sister's fortieth birthday bash, Courtney will be there with bells on. To make the job even more appealing, a famous actress, Farrah Lawson, is flying in for the occasion, and there's nothing like a celebrity cameo to raise a business's profile.

Now Courtney has less than two weeks to paint a mural, hang up tinkling windchimes, plan party games, and conjure up all the details. While she works her magic, the hostess and her girlfriends head off for an indulgent spa day--which leads to a fateful facial for Farrah, followed by her mysterious death. Could the kindhearted eyebrow waxer who Farrah berated in public really be the killer, as the police suspect? Courtney thinks otherwise, and with the help of her imaginative sleuth fairy, sets out to dig up the truth behind this puzzling murder…

Avocado Toast with Bacon
by Daryl Wood Gerber
Across the street from Open Your Imagination, the fairy garden shop that Courtney Kelly owns, is the Hideaway Café. Brady Cash, an old friend of Courtney’s, is the owner. Brady is an excellent chef and an all-around nice guy. He and Courtney met in high school and became good friends. They shot hoops together and were both in the photography club. She had a steady boyfriend at the time, so Brady didn’t pursue anything romantic. They didn’t see each other after they went off to college, but in the first book in the Fairy Garden Mystery series they bump into each other and their friendship rekindles.

In A HINT OF MISCHIEF, the 3rd book in the series, Courtney hires Brady to cater the fairy garden party she is putting on for a forty-year-old’s birthday party. Whimsically, he believes fairies eat small portions, so he thinks appetizers will be best for the party and has come up with this recipe for avocado toast with bacon.

I’m glad he did. I happen to love avocados. They’re so good for you. Yes, they have “fat” but it’s the good kind. A really ripe avocado is perfect for this treat. For this recipe, the portion is designed to be a meal for one. But it can be made into appetizers, too. All you have to do is cut the portion into fourths.

Chef’s tip: when mashing a lot of avocados at once, you might want to use a potato masher. A fork just won’t do the job. Have fun. 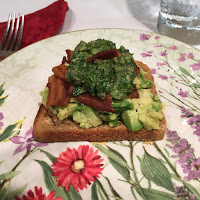 For each portion:
1 slice of bread – use a thick-sliced, whole-grain bread (can use a hearty gluten-free bread)
1 – 2 strips of crisp bacon, crumbled
1/2 ripe avocado
Dash of salt
Toppings – see below

Toast bread until golden and firm. In a toaster, you might need to toast and re-toast. In the oven, at 350 degrees F, toast for about 6-8 minutes.

In a sauté pan, slowly cook the bacon. Slowly is key. After 4 minutes, flip the bacon, and cook until desired crispness, about another 4 minutes for crispy and 5 minutes for extra-crispy. Remove from pan and drain on paper towels. When cool, crumble.

Meanwhile, remove avocado from the shell using a spoon and put into a bowl. Mash the avocado until smooth. Add a dash of salt and mix in.

Spread the avocado on toast. Top with crumbled bacon.

In a food processor, pulse the parsley, basil, green onion, capers, lemon rind, anchovy paste, mustard, and garlic powder. Add the olive oil, water, and pepper. If there is some left over, store in an airtight container.

“Thief!” a woman cried outside of Open Your Imagination, my fairy garden and tea shop. I recognized the voice. Yvanna Acebo.

I hurried from the covered patio through our main showroom, grabbed an umbrella from the stand by the Dutch door, and headed outside, quickly opening the umbrella so it protected me from the rain. “Yvanna, what’s going on?”

Yvanna, a baker at Sweet Treats, a neighboring shop in the courtyard, was dressed in her pink uniform and standing at the top of the stairs that led through the courtyard, hands on hips—no umbrella. She was getting drenched.

“Yvanna!” I shouted again. “Were you robbed? Are you okay?”

She pivoted. Rain streamed down her pretty face. She swiped a hair off her cheek that had come loose from her scrunchie. “I’m fine,” she said with a sigh. “A customer set her bag down on one of the tables so she could fish in her purse for loose change. Before we knew it, someone in a brown hoodie slipped in, grabbed the bag, and darted out.”

“I’m not sure.” Her chest heaved. “That’s the second theft in this area in the past twenty-four hours, Courtney.”

“Second?” I gasped. Carmel-by-the-Sea was not known as a high-crime town. Well, that wasn’t entirely true. We had suffered two murders in the past year. Flukes, the police had dubbed them. “Where did the other theft occur?”

“There.” She pointed to the Village Shops, the courtyard across the street from ours. Carmel-by-the-Sea was known for its unique courtyards. “At Say Cheese.”

“The thief must be hungry,” I said. Say Cheese had a vast array of cheeses, crackers, and condiments. “Were you scared?”

“No. I’m miffed.” A striking Latina, Yvanna was one of the most resilient women I knew. She rarely took a day off because she had a family of six to feed—two cousins, her grandparents, her sister, and herself.

“Call the police,” I suggested.

We didn’t have CCTV in Cypress and Ivy’s courtyard yet. Maybe I should mention it to our landlord. I returned to Open Your Imagination, stopped outside to flick the water off the umbrella, and then moved inside, slotted the umbrella into the stand, and weaved through the shop’s display tables while saying hello to the handful of customers. Before heading to the patio, I signaled my stalwart assistant Joss Timberlake that all was under control.

“Do not argue with me!” Misty Dawn exclaimed. “Do you hear me? I want tea. Not coffee. Tea!” Misty, a customer, was standing by the verdigris baker’s racks on the patio, wiggling two female fairy figurines. When she spotted me, she uttered a full-throated laugh. “You’re back, Courtney. Is everything okay outside? Did I hear the word thief?”

“Hopefully nothing too dear was stolen.”

In addition to my business, the courtyard boasted a high-end jewelry store, a collectibles shop, an art gallery, and a pet-grooming enterprise.

“Phew.” Misty gazed at the figurines she was holding. “I swear, I can’t get over how young I feel whenever I visit your shop. It takes me back to my childhood, when I used to play with dolls. I’d make up stories and put on plays. At one point, maybe seventh grade, I thought I was so clever and gifted with dialogue that I’d become a playwright, but that didn’t come to pass.”

Misty, a trust fund baby who had never worked a day in her life, even though she had graduated Phi Beta Kappa and had whizzed through business school, had blazed into the shop twenty minutes ago, hoping to hire me to throw a fairy garden birthday party for her sorority sister. In the less than two years that the shop had been open, I’d only thrown three such parties, each for children.

“Let’s get serious.” Misty returned the figurines to the verdigris baker’s rack, strode across the covered slate patio to the wrought-iron table closest to the gnome-adorned fountain, and patted the tabletop. “Sit with me. Let’s chat. I have lists upon lists of ideas.” She opened her Prada tote and removed a floral notepad and pen.

Fiona, a fairy-in-training who, when not staying at my house, resided in the Ficus trees fitted with twinkling lights that surrounded the patio, flew to my shoulder and whispered in my ear. “She sure is bossy.”

I bit back a smile and said, “The customer’s always right.”

I thought perhaps I should mention it to our landlord.

Agatha Award-winning author Daryl Wood Gerber is best known for her nationally bestselling Fairy Garden Mysteries, Cookbook Nook Mysteries, and French Bistro Mysteries. As Avery Aames, she penned the popular Cheese Shop Mysteries. In addition, Daryl writes the Aspen Adams Novels of Suspense as well as stand-alone suspense. Daryl loves to cook, fairy garden, and read. She has a frisky Goldendoodle who keeps her in line. And she has been known to jump out of a perfectly good airplane and hitch-hike around Ireland alone.
Places to find Daryl Wood Gerber:
Website | Facebook | Twitter | Goodreads | Instagram | Pinterest | Amazon Author Page
You can follow the A Hint of Mischief Blog Tour here.