Excerpt Spotlight ~ ALL THIS TIME by Annabelle McCormack 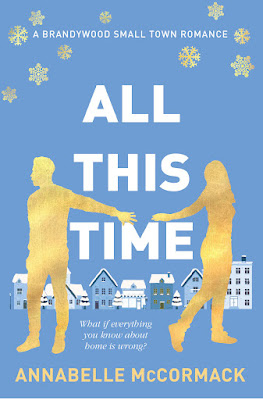 Almost ten years ago, Samantha Redding swore off her hometown of Brandywood, Maryland. Sure, she misses her family, but she’s over the gossip and drama that came with small-town living. Besides, she has the photography career she always dreamed of now.

Then her mom gets sick. Faced with a long stay at home, Sam is forced to relocate a holiday photoshoot to Brandywood to meet a tight work deadline. Only problem is, she needs help from the townspeople she’s spent years distancing herself from. Strangely, Sam finds an ally in someone who kept her at arm’s length all his life: brooding and sarcastic Garrett Doyle—the guy that dumped her best friend at the altar years before.

But Sam never knew Garrett tried to keep his distance because he was really in love with her. And he’s just come back to town after trying to get his life together. Garrett knows he ought to stay away—but the sight of her brings back all those old feelings. Anyway, she’s leaving Brandywood soon enough, and then he can go back to trying to forget her.

. . . except, Sam’s about to discover that everything she thought she knew about home—and Garrett—was wrong.

A contemporary romance with steamy, open door romance and tear-jerking moments about facing the past and finding forgiveness, All This Time is the first book in the Brandywood Small Town Romance Series. CW: alcoholism, abuse, cancer, language

Sam/Garrett (Sam’s POV)
Garrett nodded toward Yardley’s. “You should go back. Mr. December might show up eventually, and from what I’ve heard from the women at Bunny’s, you don’t want to miss a date with him.”

Fresh embarrassment prickled Sam’s cheeks. He must know about the firefighter calendar Katie had been going on about. “I’m actually glad he didn’t show up.”

Garrett gave her an odd look then understanding dawned on him. He started walking again. “Because you’re not ready to move on from Eli. I get it.”

Eli? Huh. No, that had been the furthest thought from her mind. She practically had to trot to keep up with him. “Please slow down. It’s pretty much impossible for me to keep up with you and I don’t want to walk you to your place in a broken heel.”

Garrett laughed. “You don’t have to walk me to my place.”

“Well, maybe I could use some company tonight.” Her breath crystalized and fogged in front of her. “It’s been a really shitty night.”

“Because of Mr. December?” Garrett looked over his shoulder at her, then seeming to notice the pace he was setting for her, he stopped again.

She caught up to him, her heart racing from exertion. “Why don’t you let me call you a car?”

“It’s a ten-minute walk, Redding. I’d already be halfway there if it wasn’t for you. I’m not from New York, like you.”

“You’re impractically dressed for a night at the end of November in the mountains.” Garrett smiled tightly. “And encouraging me to do rideshare. Go home. And I don’t mean to your mom’s. You don’t want to be here anyway.”

“Why are you acting like this? I thought we were—” She stopped, her shoulders falling. That feeling of closeness with Garrett over the last week . . . had it all been one-sided?

His face darkened. “You thought we were what?”

“Nothing.” Sam turned and looked back up the street, half-tempted to just walk away and call a car. Garrett awaited an answer. “I don’t know. Friends? You’ve been nice to me, Garrett, even when most everyone else has been making me feel like I’m this awful human being.”

Whatever anger Garrett seemed to hold toward her seemed to thaw and his mouth pursed. Unzipping his coat, he took it off and handed it to her. “I know. You don’t need my help, but if you’re going to walk me back to my house, you should probably have it. I’d offer you my shoes, but I don’t think they’ll fit.”

She laughed lightly and put the coat over her shoulders.

Garrett’s warmth radiated from the coat. And his scent. Raw and masculine, with a hint of something smoky and sweet. Almost the way the pipe tobacco from the old cigar shop in town used to smell. She’d stopped in there occasionally as a kid, just to fill her lungs with it.

Something in the scent and the warmth of his body made her legs tingle, her nerves lurch.

“Thank you.” She willed her feet into motion and continued at his side. “Now are you going to tell me what’s wrong?”

“Nope.” Garrett put his hands in his pockets. He gave her a sidelong glance. “So are you going to patch things up with Eli then?”

“No. If being back has taught me anything, it’s that Eli is part of my past. We keep trying to make it work, but I think it’s mostly because we were always good friends and neither of us wanted to hurt the other by letting go.” Her gaze moved to the picture windows of the shops lining Main Street. Overnight, Christmas decorations and lights had gone up. “And in the end, we probably hurt each other more than we would have if we’d just had the courage to let go.”

“Then why were you glad Mr. December didn’t show up?”

She pulled his coat tighter around her. Why had she? Because she had only agreed to do this for Katie’s sake. And because . . . she blinked. “I don’t know. It was just a dumb blind date. I would rather spend time with someone I care about. Like you. So it all worked out.”

Garrett froze, swiveling on one foot to face her. He caught her by the wrist and opened his mouth, but no words came out.

Then his thumb brushed across the soft skin right near her palm.

Gentle, but deliberate. A caress so thoughtless she shouldn’t have noticed. But she did. She noticed.

And goose bumps rose under his grip, her fingertips buzzing into their own strange life, aching to reach his fingers and brush against them.

Her breath caught and her eyes flew to him, her breath slowing as he scanned her gaze. Then his gaze closed off and he let go of her wrist. “Well, I’m glad it worked out too.”

What the hell was that?

The sensual tug wasn’t unfamiliar, but it had never been so strong, never so intense. Garrett had touched her before. But something just then had been different. 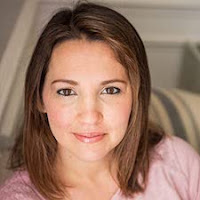 Annabelle McCormack spins you tales of epic historical adventure, heartfelt romance, and complex family dynamics with strong female protagonists to make things interesting. She graduated from the Johns Hopkins University’s M.A. in Writing Program. She’s a sucker for pizza (cheese, bread, and tomatoes are the perfect foods) and mangoes, loves baking and photography, and never wants to do laundry again. She lives in Maryland with her hilarious husband, where she serves as a snack bitch for her (lucky-they’re-cute) five children and three boxers.

She’s half-Costa Rican and speaks fluent Spanish, so you can always drop her a line in either English or Spanish. Pura vida!