'Tis the Silly Season from A NASCAR Holiday

So I’m going to do something a little different, which is not review an entire book. I have this anthology, which I read last year. The book is made up of three stories by three authors, which up until the time I read the book, I had never heard of before. The book is called A NASCAR Holiday, with stories from Kimberly Raye, Roxanne St. Claire, and Debra Webb. All three women are amazing in their own rite.

What I love about anthologies is that you as a reader get to experience writing by several authors and sometimes you’re allowed to be introduced to and fall in love with a new author. That’s exactly what happened to me with this book.

As I mentioned before, I read this book a year ago. I’m choosing to focus on one story from the anthology because it has stuck with me and has the elements that make me love romance novels. This isn’t to say the other books aren’t good. They just didn’t work for me or give me the connection to the characters and the story that I was looking for at the time.

Today, I’m choosing to tell you about and review ‘Tis the Silly Season by Roxanne St. Claire. Since the story is STILL sticking with me after a year, you know it deserves a high rating. Here’s the crazy part, the anthology was put together in 2008. Roxanne wrote the story in 2006. But all of the books are able to withstand the test of time. I had NO idea the books were written five years ago. 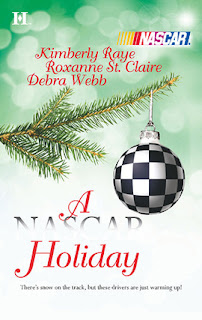 ‘Tis the Silly Season by Roxanne St. Claire
a part of A NASCAR Holiday anthology

NASCAR Busch Series racer Clay Slater needs a ready-made family--fast--to impress a potential sponsor. Lisa Mahoney can’t resist the chance to give her kids the storybook Christmas she’s never been able to...and if that includes a kiss under the mistletoe, so much the better!

Of the three stories in this anthology, this is hands down my favorite! The book pulled me in the second I started reading it. I honestly could not get enough. I love both Clay Slater and Lisa Mahoney.

Lisa Mahoney is a single mother with two young boys who works as a waitress at a diner. Since the death of her father and brother years ago, she hasn’t celebrated Christmas. A year ago, around Christmas time, her lousy husband left her and the kids. Keith (8) and Nick (6) really want the hot toy of the Christmas season. This year, she wants to make Christmas extra special for her kids, with the toys they want and a Christmas tree with all the decorations. The only problem is her credit cards are maxed out and she doesn’t really have any money.

Clay Slater is the hot, sexy NASCAR racer, who wants to race for Thunder Racing, with Kincaid Toys as the sponsor. Clay is a good racer, the only problem is that he needs to show them that he’s committed and responsible. Clay is an easy-going guy who is accustomed to brief encounters with the models who stop by the garages. Thata doesn’t really send a wholesome family image.

Lisa’s boss is a jerk, to put it mildly; he takes the tip money Clay left for her. After her sleazy boss tries to hit on her, Lisa ends up getting fired. Clay comes up with the idea to solve both of their problems. He will pay her $5,000 and give her kids a wonderful Christmas, in exchange for her Christmasizing his house and pretending to be his wife for a week, in order to get the deal with Kincaid Toys and Thunder Racing.

Immediately, Lisa knows that she can lose her heart to Clay if she isn’t careful. Over the course of about three days, Lisa is able to transform Clay’s house into a nice, warm, loving home with kids and Christmas decorations throughout. Clay himself starts to fall for Lisa and her kids.

Even with the best laid out plans, when kids are involved things can go wrong. David Kincaid, owner of Kincaid Toys, shows up at Clay’s house with his family in tow. Due to bad weather, they end up spending the night at the Slater household. Nick and one of David’s girls end up getting into an argument, where Nick tells everyone Clay and Lisa aren’t really married. David and his family leave immediately, but not before David chastises Clay for lying to him. He also tells Clay that Clay, Lisa and the kids can’t fake what he and his family saw, a real family.

After Lisa and the boys leave, Clay realizes what he really wants; Lisa and the boys in the home they created. I love the way Clay goes after Lisa, which is reminiscent to the time they met outside of the diner in the beginning.


Purchase through: Amazon
Posted by Kim at 5:15 AM