Review: Down for the Count (Book 1) by Christine Bell 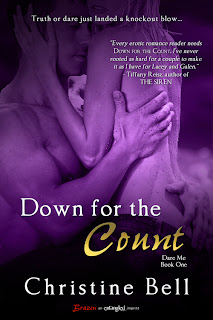 a Dare Me novel by Christine Bell

When Lacey Garrity finds her groom in flagrante delicto in the reception hall closet with her bridesmaid, she’s saved by her best friend’s older brother—childhood tormentor, crush, and boxing bad boy Galen Thomas.  Galen’s solution is both exciting and dangerous.  What better way to forget the mess of her life than to go on her honeymoon with a hot guy who can’t promise anything beyond today?

Galen had been counting on Lacey’s wedding to put her out of reach—and out of his mind—once and for all, but their steamy Puerto Rican escape is testing all his boundaries.  Now that Lacey’s embracing her inner bad girl, Galen is tempted to throw in the towel and claim her for himself.  But with the biggest fight of his career on the line and an important business merger threatening to derail Lacey’s resolve, their romance might be down for the count before it even begins.

Lacey Garrity’s life is set.  She is the marketing director for her family’s law firm.  She’s just married Marty Clemson and things should be perfect.  Too bad she can’t find Marty, the man she married two hours ago.  What’s a girl to do?  Well, I guess it’s time to go look for him.  With the help of her phone she finds Marty in a closet.  But his pants are down and he isn’t alone.  Marty’s in the closet with Becca, Lacey’s bridesmaid and one of her oldest childhood friends.  To make matters worse, not only does Lacey stumble upon this scene, so do her best friend Cat and Cat’s brother Galen, a man Lacey’s had a thing for for years.

Galen Thomas is an almost thirty-year-old boxer.  Thanks to his sister’s relationship with Lacey, Lacey has never been far from his mind.  The girls have been best friends for almost twenty years, almost as long as Galen has had his own little crush on Lacey.  When Lacey’s world shatters, it’s Galen who steps in to save her from an embarrassing situation.

Galen takes Lacey to the Thomas family cabin with the intention of leaving her alone to lick her wounds.  Lacey doesn’t want to be left alone and suggests that she and Galen go on her honeymoon to Puerto Rico.  Lacey isn’t ready to deal with the fall out of leaving her husband, the fact that her not-so-wonderful mother Rowena aka The Admiral is going to blame her, or the business merger which is part of the reason for the wedding in the first place.  Galen is only happy to take Lacey away and help her see that she's stronger than she gives herself credit for.

One of my favorite quotes from the book is Cat talking on the phone to Galen about Lacey, the night of “closet gate”, "Good. She's so uptight sometimes, I was afraid she wouldn't let herself have a day to break down a little.  I was half thinking she'd be in a hotel somewhere writing apology letters to the wedding guests and re-mapping her future out on a spreadsheet or whatever."

Lacey and Galen are opposites.  I can't really say that he's a spur of the moment kind of guy, but he knows how to relax and have fun.  Lacey is, as Cat says, uptight A LOT.  She's a people pleaser.  It probably comes from her parents, unfortunately.  Her mother is all about control and appearances.  She doesn't care what you have to do or endure in order to look good at the country club.  In fact, Rowana despises the whole Thomas family because they aren't from money or, in her opinion, have enough.

Lacey and Galen spend a week in Puerto Rico, just the two of them, laughing and enjoying each other's company.  Lacey learns how to loosen up and have fun.  Though they each realize that they're attracted to the other, it takes them awhile to act on their feelings.  But when they do, oh boy, things get hot and steamy.

I'm not a girl who's into boxing, so I never thought of boxers as being sexy as sin, but Galen has definitely made me change my mind.  Not only does this guy have a six pack, he has a eight pack.  He's a good guy who just wants Lacey to be happy, whether it's with him or not.  Really, how can you NOT fall for a guy who says, "When you come to your senses and you're ready to have the experience of a lifetime, I'm your guy.  I'm the one you're going to get wild with.  I'm the one who's going to show you that getting down and dirty doesn't mean rolling in the wet sand." - Excuse me, while I close my mouth and wipe the drool off my face.

I immediately fell in love with the characters and the book itself.  Lacey reminds me of someone I know.  Galen, like I said is unbelievable.  There’s so much to love about this guy, there isn’t enough time to say everything.  And Cat is a little feisty but she's the perfect friend to have when you're as square as Lacey is.

You gotta love books where both people have had a thing for each other for years but refused to admit their feelings for whatever reason.  That can ONLY lead to GOOD, HOT, and AMAZING things.  As always with Brazen, be sure to have a fan handy, so you don’t get too hot.

If I didn’t love the book before, the Notting Hill moment put it over the top!  I can’t wait to read more from Christine and this series.