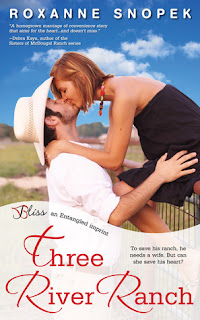 Needing a fresh start from her two-timing fiancé, Aurora McAllister answers a realtor's ad for a guesthouse on the beautiful, serene Three River Ranch.  She shows up at Three River tired, heartbroken, and with no one but her trusty Labradoodle as a companion.

Cowboy Carson Granger has enough trouble in his life without adding a woman and her dog to the mix.  There's the untamed mustang he's prepping to release into the wild, not to mention his father's crazy will, which stipulates that if Carson wants to fully inherit Three River, he'll need to find a bride.  Carson wants nothing to do with love and especially not a marriage of convenience.  But he soon realizes Rory and everything she represents, might just be exactly what he needs.

Sometimes love arrives on your doorstep when you least expect it…

Aurora (Rory) McAllister is in desperate need of a fresh start.  She’s left her job, her best friend, the city she lives in, and her cheating ex-fiance behind.  Rory is so desperate that she even answers a realtor’s ad for a guesthouse.  Rory signs all the rental paperwork, site unseen.  Little did she expect the not so welcome surprise that she would receive.

Carson Granger is the oldest of Derek and Marie Granger’s two boys.  Marie died of cancer before Carson and his brother Mitchell started high school.  After their mother’s death, things got pretty bad for the Granger men.  Derek has recently died and has left a stipulation in his will that his sons are not to get the multimillion-dollar ranch known as Three River unless they get married and have a family.  Because of the way Derek was with his boys, he knew they would never come back home and agree to such a thing.  It’s always interesting how when a person knows that their time on this earth is coming to a close, they try to make things right.  Could one of the last times that Carson and Derek spoke to each other hold an important key for Carson?

Carson’s passion lies with wild mustangs.  In fact, he’s just rescued a beautiful, full-blooded, Spanish mustang named Stormy.  Carson’s hope is to get a research grant that will enable him to look after his beloved mustangs and buy Three River Ranch out-right and not give into his father’s “pig-headed” demands.

I love when the hero and heroine of a book first meet.  It sets up how they are going to interact throughout the book.  Carson has been out of touch for a month or so and didn’t make it a priority to return his lawyer’s phone calls.  Thus, he wasn’t expecting a stranger with a funny looking dog to be on his property when he returned home.  And Rory wasn’t expecting to run into someone who was accusing her of trespassing.  With Rory being very pregnant, the two come to an agreement to share the guesthouse for a couple of months.  Awwww, instant friendship.  Okay, not really.

Three River Ranch is one of those stories where you already know what’s going to happen.  But who cares????  A romance book is all about the journey.  Roxanne Snopek did an excellent job.  Oh, and of course there’s the must shed a tear moment.  Darn her.

In the midst of chaos, Rory manages to calm a scared and nervous Stormy and chip away at the sometimes cold and hard exterior of Carson.  Rory and Carson are two people who need each other and don’t even know it.  I love all the characters in this book, from the twins Bliss and Blythe, to Jonah, Carson’s attorney, to his good friend Zach, and Rory’s best friend in the whole world Desiree.  I’m very excited that there’s another book in this series.  Hopefully, there’s more than just the one book.