Review: A Shot of Sultry by Macy Beckett 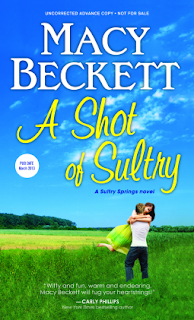 Welcome to Sultry Springs, Texas: where home can be the perfect place for a fresh start.

For West Coast filmmaker Bobbi Gallagher, going back to Sultry Springs is a last resort.  But with her career in tatters, a documentary set in her hometown might be just what she needs to salvage her reputation.  She just can't let anything distract her again. Not even the gorgeous contractor her brother asked to watch over her.  As if she can't handle filming a few rowdy Texans.

Golden boy Trey Lewis, with his blond hair and Technicolor-blue eyes, is a leading man if Bobbi ever saw one.  He's strong and confident and—much to her delight—usually shirtless.  He thinks keeping his best friend's baby sister out of trouble will be easy.  But he has no idea of the trouble in store for him...

﻿
Hmmmm, where do I begin?  As I’m sitting here, I keep thinking about Trey, with his blond hair, blue eyes, fabulous smile, and the biggest dimples ever!  (Yes, I have this dreamy look in my eyes and there’s a BIG smile on my face.)  I read Sultry with a Twist and Trey was the guy who stole my heart.  I couldn’t wait to read his story.

So the moment comes and I FINALLY get to read A Shot of Sultry.  After I read the book I have to admit I was torn.  Some other woman got my guy!!!  Yes, I know I must step out of the book and understand Trey Lewis isn’t real.  (Sigh. Sad, emotional music playing in the background.)  Okay, seriously, let’s get down to business.

The new word or phrase I picked up from this book was “foodgasm”.  Honestly, I’ve experienced it TONS of times.  I didn’t know there was a name for it.  I digress....Sugar.  (You have to read the book to understand what I'm trying to say.  Not that I say that a lot or anything.  I wanted to put it in.)

Bobbi Gallagher is the little sister of Luke (the hero from Sultry with a Twist).  They have the same mother, but different fathers.  When Bobbi was about three or four years old, their mother decided to leave Sultry Springs and only take Bobbi to California with her, thus leaving Luke behind.  Bobbi grew up with a drug addict for a mother in various crappy, rundown apartment complexes.  After her mother died, Bobbi went from foster home to foster home, before she was finally adopted by her Dad.

Trey Lewis, gosh I love this guy, has a smile that will melt your heart and dimples Bobbi describes as "sure-fire, panty-removing gifts from God".  But behind all of that is a man who's hurt.  Almost nine years ago while Trey was in the Army, he got into a bar fight and ended up hitting an officer.  Trey had a good and valid reason for doing so, but he still got an OTH, Other Than Honorable, discharge from the Army.  Getting the OTH put a bigger stain on the relationship he had with his parents.  In fact, his father hardly ever talks to him.  And when I say hardly, it’s pretty much never.  Trey’s mother is cold and distant.

Trey and Luke have been best friends for ten years.  Trey would do absolutely anything for Luke, even if it means disposing of an ex who happens to show up at Luke's bar looking for him.  Well, it seems the "ex" is in fact Luke's little sister, which he failed to mention to his best friend.  What ensues is truly a reason to NOT drink a beverage, while reading this book.

Bobbi is in town for the summer to shoot a “red-neck” documentary, sorta like The Bachelor mixed with Jersey Shore, except you have two guys going out with several women, trying to find love by the end of summer.  Well, it’s actually crazier and sometimes wilder than that.  Since Bobbi and her film crew of Bong and Weezus are going to be hanging out at the local bars, Luke asks Trey to watch his sister and keep her safe.  The added request is that Trey (known as a player to Luke) is NOT supposed to sleep with Bobbi.  Yeah, good luck with that.

Both Bobbi and Trey are at a crossroads in their lives.  Bobbi has made a mistake that she is trying hard to make up for.  She will do just about anything to get her reputation back.  Trey wants to get rid of his OTH, as a way of hopefully reconnecting with his parents.  But it seems reconnecting with his parents is going to be harder now.  What ensues is a surprise.  Throughout the book, Bobbi and Trey are both fighting their attraction to each other, each for different reasons.

A Shot of Sultry is a hilarious story with some serious and surprising moments.  Some characters will learn how to overcome their past.  Some will learn that when one door closes another one will open, possibly bigger and better than the one before.  Some will learn that it’s time to grow up and take things seriously.  What I can say is that none of the residents of Sultry Springs will be the same after this book.

Books in the Sultry Springs Series
1. Sultry with a Twist (review)

Today, I’m really excited to get to sit down with Macy and her crew from Sultry Springs.  Hi Macy, June, Luke, Bobbi, Trey and Colton.  Thank you all for joining me today.

Macy - Always a pleasure! Thanks for having us.

How’s everyone doing? Is Macy treating you all well?

Trey - Macy’s a harsh mistress—she puts us through some pretty tough shit—but it’s worth it because there’s always a huge payoff.

Macy - See what I have to deal with?  My characters are perverts.

Bobbi and Trey, you guys had some BIG changes and discoveries occur in A Shot of Sultry.  How are you guys adjusting to everything?

Bobbi - Macy won’t let us say too much and risk spoiling the story, but….

Trey - Let’s just say we have no complaints—and we’re making good use of all those scarves.

(Kim clears her throat.) So, Luke….are you okay and finally coming to terms with your best friend and little sister being together?

To be honest, it’s still a little weird.  I know Trey’s a good guy, but I don’t want to think about him doing…things…to my kid sister.  Know what I mean?

He does have some nice moves.  Sorry, but I understand what you’re saying.

Mrs. Mae-June July Augustine-Gallagher (sorry, I just love your name) how are things going with you and Luke and your one year plan?

Like she doesn’t already know that.  She’s been watching you, since you guys sat down.

Macy, you introduced us to someone new, Colton Bea.  Can you tell us a little bit about him?

Ooooooh, Colton is my favorite kind of character—the red-hot, reformed bad boy.  And let me tell you…he’s been a very bad boy.  But a second chance at love with Leah McMahon, the preacher’s daughter, might turn him around real quick!

Colton, the final book in the Sultry Springs Series is going to focus on you.  Are you looking forward to your story being told and are you trying to get Macy to see things your way?

I can’t friggin’ wait.  I’ve been waiting ten years for another chance with Leah.  This time, I won’t screw it up.  I hope.

Wow! Most guys wouldn’t be too happy with the world knowing about their past and watching them do everything and anything in their power to win back a girl.  Good luck.


Macy, can we look forward to hearing more from the Gallaghers and Trey and Bobbi in book 3, Surrender to Sultry?

You bet!  Book 3 opens two years after A SHOT OF SULTRY ends, just as Bobbi and Trey are moving back to Sultry Springs.  So you’ll get to see all the characters you’ve grown to know and love—even Pru and Judge Bea!

You have one more book in the Sultry Spring Series coming out later this year.  I know as Melissa Landers, you are working on a book called Alienated.  Can you tell us a little about it and when it will be coming out?

ALIENATED [ link: http://www.goodreads.com/book/show/13574417-alienated ] is my YA debut, coming in February 2014 from Disney Hyperion.  In a nutshell, that book is about a high school valedictorian who gets more than she bargains for when she hosts the nation’s first interplanetary exchange student.  Don’t worry—no tentacles.  These are hot aliens.  (smiles) Would you expect anything less from me?

Which types of books do you like writing more and why?

I enjoy YA sci-fi and adult romance, but for different reasons.  The sci-fi is more challenging, so I have to push myself and think in new directions.  The romances are fun because I don’t have to censor myself.  I don’t want to give up either genre.

Ladies and gentlemen, thank you all for taking time out of your busy schedules and talking with me.  Colton, I can’t wait to see you sweat.

Oh my gosh….Colton Bea just called me honey.  Excuse me while I fan myself.

Macy - Don’t worry, Kim.  I love making Colton sweat.  Thanks for having me on the blog today, and happy reading!

The ALWAYS wonderful Macy and her publisher, Sourcebooks Casablanca, are offering up a copy of Sultry With a Twist (US/CAN only and no PO Boxes).  For a chance to win, just follow the Rafflecopter instructions below.

Macy Beckett writes hot and humorous romance set in Sultry Springs, Texas: where first loves find second chances.  Her debut novel, SULTRY WITH A TWIST, http://www.amazon.com/Sultry-Twist-Springs-Macy-Beckett/dp/1402270364 released in October, and book two, A SHOT OF SULTRY, http://www.amazon.com/A-Shot-Sultry-Springs/dp/1402270399/ is now available in stores and online.  A third Sultry Springs novel will release in August.  Additionally, Macy writes young adult science fiction under the name Melissa Landers.  You can learn more about her books—for adults and teens—on her website. http://macybeckett.com/
Posted by Kim at 5:17 AM