REVIEW ~ Meant to Be by Terri Osburn 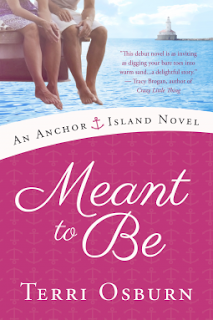 Beth Chandler has spent her whole life pleasing others. She went to law school to make her grandparents happy. She agreed to marry her workaholic boyfriend, Lucas, to make him happy. And, despite her fear of boats, she took a ferry to see Lucas’s parents just to make them happy.

While suffering through a panic attack on the ferry, Beth meets a tall, sexy stranger who talks her down from her fear—and makes her heart flutter in the process. Soon, she has a new reason to panic: her gorgeous, blue-eyed rescuer is Lucas’s brother, Joe. But could she ever leave her fiancé for his own brother…even if Lucas is more focused on making partner than on making their relationship work…and even if Joe turns out to be everything she never knew she wanted?

Filled with excitement and delight, Meant to Be is the story of a young woman torn between urban pressures and small-town pleasures.

Meant to Be is Terri Osburn's first published novel. I have to say that I was pleasantly surprised by the book. She doesn’t have the family or their friends being rich and glamorous . They’re real, middle-class people just trying to make a living and live good lives. The characters are all likeable or at least likeable once you get to know them. It's a book you're going to be glad is a part of a series because you’re going to want more.

Lucas Dempsey grew up on Anchor Island, a small island only accessible via ferry. Once he was old enough to leave, he did and now hardly ever returns. Lucas is VERY career minded and driven. He wants to become the youngest partner at his Richmond law firm. Lucas has recently become engaged to Elizabeth. Lucas and Elizabeth are supposed to spend the next two weeks on vacation, visiting Lucas’ family on Anchor.

Elizabeth "Beth" Chandler is an attorney working for the same Richmond firm as Lucas. Unlike Lucas, Beth prefers to be in the background, working as a researcher. She's pretty much a go with the flow person, who will do anything to make someone else happy, even if it means making herself unhappy. The story starts out with Beth on a ferry alone traveling to meet her future in-laws. This trip has trouble written ALL over it. First of all, Lucas has never introduced Beth to his family before. Secondly, Lucas has to work a little later than anticipated and has Beth go on without him. And finally, most important of all, Beth is TERRIFIED of being on boats because of a childhood incident.

In the midst of having a panic attack, a loveable dog shows up with his sexy owner. The stranger and Beth strike up a conversation and the stranger manages to get Beth to relax. During the conversation, Beth realizes that Joe, the sexy stranger, is actually Lucas’ older brother. Even after Joe makes an assumption as to who and what Lucas’ fiancee is like, Beth doesn’t tell him that she is in fact the person he’s talking about. Beth DESPERATELY wants Lucas’ family to like her. Strike one for not being honest up front...

Once the family is all together, there’s tension between Joe and Beth. Not only is the tension present because Beth didn’t confess that she was actually Elizabeth, but also because Joe and Beth are both attracted to each other. After only being on the island for one day, Lucas has to go back to Richmond to work on a case. He insists that Beth stays and promises to be back as soon as he can. Lucas goes days without calling and finally makes a return appearance over a week later after receiving some disturbing news.

Beth immediately recognizes the difference between Joe and Lucas. Joe isn’t into the fancy clothes and cars. People’s opinions of him aren’t on the top of his list of things to concern himself with. He’s a blue-collared guy who runs a charter fishing boat and he loves the island he lives on. The biggest difference of all is that he actually takes the time to get to know who Beth really is. One important thing is that Joe actually asked Beth which name she preferred to be called by. Even though her name is Elizabeth, she prefers to be called Beth. A question Lucas would never ask and a name he would never call her. Beth and Joe make an attempt to become friends. It turns out that they are good for one another. She manages to make him not be the guy who seems to be irritated with the world on a daily basis and he forces her to realize that her opinions and wants are just as important as anyone else’s.

Events transpire that force the people on the island to band together, with Beth leading the charge (something that could get her fired from her job). To Beth’s dismay, even this doesn’t get Lucas to come back to the island. Over the course of her time on the island, Beth falls in love with it and the people who live on it, one person being Joe.

Joe and Beth both recognize the attraction they feel for the other but agree that they can only be friends and couldn’t risk hurting Lucas. A rumor is spread by someone who will do anything to hurt Joe, one which could destroy the whole Dempsey family.

Meant to Be is a very enjoyable read about two people who should be together but are willing to sacrifice themselves for someone else. It’s a story of finally realizing that in order to truly be happy, you have to be yourself and follow your dreams.