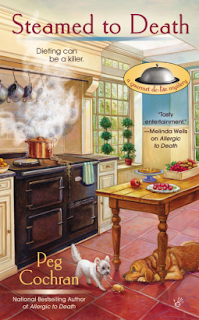 Gourmet health food caterer Gigi Fitzgerald is used to helping dieters drop a dress size. But when her clients start dropping dead, she’s ready to switch her chef’s hat for a detective’s cap and track down a killer. . .
Aging soap star Felicity Davenport is looking to revamp her image, and she’s using Gigi’s Gourmet De-Lite to help her shed a few of those unwanted pounds. Having such a high-profile client is definitely good for business, but when Felicity is found murdered in her sauna, things start getting too hot for Gigi to handle.
The list of suspects is a mile long, and Gigi’s best friend, Sienna, is at the top. Refusing to let her friend get blamed for a crime she didn’t commit, Gigi is determined to hunt down the real killer. But, as the case reaches a boiling point, Gigi will have to be careful or she could be the next one getting burned.


STEAMED TO DEATH is the second book in the A Gourmet De-Lite Mystery Series from Peg Cochran.  I’m going to say this is a standalone book since I didn’t read the first book and I had no trouble reading and following along with the story.
Gigi Fitzgerald is a personal chef living in Woodstone, Connecticut.  Gigi is the person people go to for healthy meals, if they want to lose weight, and look good.
Felicity Davenport is an aging soap opera star.  Felicity is worried about being replaced by younger starlet Vanessa Huff.  So, Felicity turns to Gigi for help.  Felicity plans a big party that includes overnight guests and asks Gigi to cater the party for her.
Less than an hour before the party starts, Felicity is found dead in her bathroom sauna.  Once Felicity’s death is determined to be murder, the suspect list starts to grow with Gigi’s best friend and Felicity’s publicist, Sienna Paisley being at the top of the list.  It’s true that to the public eye, Sienna has reason to want to kill Felicity.  In fact, just the day before she said she could kill her for making it appear that Sienna’s husband, Oliver was having an affair with her.  With her pregnant best friend at the top of the suspect list, Gigi puts on her amateur detective hat to find out who the real killer is.  This puts Gigi back up against Detective Bill Mertz, who’s had issues with Gigi and her snooping in the past.
Peg introduces you to several people who could be responsible for Felicity’s murder.  While it is easy to figure out who the killer is, the why is quite surprising and unexpected.  I loved the little side romantic tension going on between Gigi and Mertz.  I actually felt rather sorry for the guy; he was so cute.
I’m looking forward to reading more books in this series.
Rating: 3.5
Release Date: June 4, 2013
Book Length: 304 pages
Source: Blog Tour Host via Penguin-Berkley & NetGalley
Reviewed by: Kim
Reading Format: Available in eBook and Paperback