Christi Barth earned a Masters degree in vocal performance and embarked upon a career on the stage.  A love of romance then drew her to wedding planning.  Ultimately she succumbed to her lifelong love of books and now writes contemporary romance.  Christi is President of the Maryland Romance Writers and lives in Maryland with her husband. 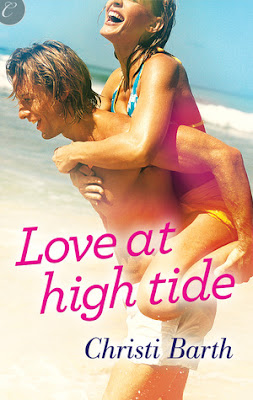 Darcy Trent is lucky Cooper Hudson is on hand to sweep her off her feet—literally—when she nearly drowns while swimming in the ocean. But life-saving aside, Mr. Perfect's timing stinks: Darcy's career is about to take her to the complete opposite side of the Atlantic. Still, a little summer loving with the tall, blond and sexy former cop is far too tempting to pass up.
When his plans to enter the Secret Service went south thanks to a bum knee, Coop retreated to the family beach house to mull his future. Romance is the last thing on his mind, until he fishes a curvy brunette out of the sea. Now, spending time in Darcy's arms seems like the ideal distraction, even if it is just for a week.
But with Darcy's departure date fast approaching and their careers on the line, can they realize in time that their beach fling might become the real thing?

“Thanks for the rescue. If you hadn’t grabbed me, I’d still be doing somersaults underwater. In my book, that qualifies you for hero status.”
An unreadable emotion flickered across his eyes so fast she almost missed it. In a low mutter, he said, “Don’t call me a hero.” He hit the hard-packed sand at the edge of the water and stopped walking.
Modest, heroic and gorgeous. And it didn’t take even a fraction of her eight years of training in cultural anthropology to figure out he was attracted to her. They’d long since hit land, and yet he made no move to put her down. Not that she was complaining. She’d happily continue to sit cradled in his arms. It gave her an up-close view of his chiseled cheekbones, sharp enough to etch glass. Her fingers brushed through the salt-spiked tips of his blond hair. No doubt about it: she’d found the man candy Trina had promised. One bite of him would be as sinful and addictive as a chocolate honey truffle.
“Well, I can’t call you Mr. In-The-Right-Place-At-The-Right-Time.” When his lips curled up showing off his dimple, Darcy’s interest kicked up a notch.
“Good point. I’m Cooper Hudson. Coop, to my friends.”
“Darcy Trent.”
“It’s been a long time since I met an ocean virgin.”
“Oh, but only in the aquatic sense, I assure you.” What? Why wave her long-vanished virginity under his nose? Now he probably thought she had the morals of an alley cat. But hearing the hottest man she’d ever seen use the word virgin threw her for a loop. Not the standard nice-to-meet-you conversation, by a long shot.
He flashed an easy smile. “Don’t worry. I hadn’t planned on delivering you as a virgin sacrifice to appease the volcano gods over at the mini-golf course.”
Okay, now Darcy could add funny to the list of his overwhelming awesomeness. Maybe she really had blacked out and was hallucinating her ideal man while unconscious, underwater. What else could explain such perfection?
“Darcy, what happened?” Trina’s yell preceded her appearance in front of them. After a quick yank upward to her scrap of a top, she rested her hand on Darcy’s leg. “Why’s he carrying you? Did you get stung in the foot by a jellyfish? ’Cause if you did, I’ll pee on it. That’ll take the sting away.”
That certainly settled the whole am-I-hallucinating question. Never, ever would Darcy fantasize about her best friend peeing on her. The situation had to be real. And if Trina in all her adorable annoyingness was real, then her hot hero hunk had to be real, too.
To her dismay, Cooper lowered her to the ground.
“Your friend’s fine,” Cooper announced. “A wave almost rolled her, so she’s a little shaken up, but uninjured.”
“You keep your distance,” Darcy warned with a hand raised to keep Trina at arm’s length. “Don’t even think about peeing on me. Not even if I get attacked by an entire school of jellyfish.”
Trina wrinkled her nose. “Okay, but if the situation arises, just remember that I would be willing to make that sacrifice.”
“Friendship is a beautiful thing.” Cooper’s sardonic tone belied the sincerity of his expression.

For some authors (such as my friends who write captivating tomes on ancient Egypt or the Renaissance), research is not only integral to their books, but quite obvious to spot. Their process can take much longer to turn out a manuscript, because there is just that much research to be done. You wouldn’t think that would be the case in my books. I write funny, sexy romantic comedies. Don’t take my word for it – check my reviews on Amazon if you like. My books are light and frothy, especially my new beach fling release, Love At High Tide.

But….they are, nevertheless, chock full of research. Much of it for comedic effect. For example:

“Guess this is as good a time as any to ask.”
“Ask what? ’Cause right now, after the awesome sexing you just did, I’d give you anything. I’d run out and learn how to speak all twenty Mandarin dialects if you asked.”

Even though that is a funny, tossed off line, I did have to research exactly how many Mandarin dialects exist. I also looked up the nearest land…across the Atlantic….to Maryland:

Darcy stared at a point over his shoulder. Probably the ocean. Nothing else that direction til you hit the horizon—and the view didn’t change for another twenty-two hundred miles until you hit Portugal.

Then there was the obvious stuff, background material for my characters. Things like figuring out exactly what cultural anthropology is, and what would be a good dissertation topic for a PhD candidate in it. The exact sunset time in Ocean City in May. Krav Maga. Secret Service training, almost all of which I gleaned from a fascinating article in the Washington Post you can read here. The chain of command/jurisdiction between state and city police, DHS and ICE (I double checked that one when I happened to be hanging out with our Governor’s security chief. Think I talked him into getting a book for his wife, too!). The poorest country in Europe (Moldova) and the waiting period to purchase a gun in Maryland.

It wasn’t all deadly serious. My characters needed a beach house, which necessitated scrolling through gorgeous rental properties far above my price range for floorplan and decorating ideas. I perhaps lingered longer than that particular task deserved. And I did have lots and lots of on-beach time spent soaking up the atmosphere. And the Dorritos. And the views of the hot lifeguards (a writer can’t research too much!). So while no, I did not have to fact-find about period-appropriate undergarments, a contemporary romance writer does still need to put her nose to the research grindstone. Trust me, that extra time spent is worth it if I tease a laugh out of you or stun you with my seamless authenticity!

Okay... I really enjoyed reading Love at High Tide.... Did I ever think about ALL the research Christi had to do?  NOPE... I will admit, I remember being impressed that Cooper knew what country you would get to first, when looking from the spot they were at.  And the Secret Service training...Oh my GOD.  Everything they have to go through makes the guys that much more Alpha and Sexier.  Thank you VERY much Christi!


You can see my review of Love At High Tide here.