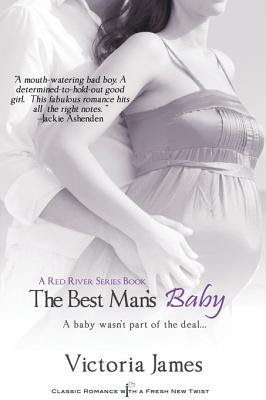 Florist Claire Holbrook has always played by the rules her entire life, but breaks them to spend one night with sexy lone wolf Jake Manning, a man she's adored since she was a teenager. Six weeks later, things get complicated when she discovers they created a bond that will last a lifetime.

Jake has never played by the rules. Getting Minister Holbrook's daughter pregnant wasn't part of any life plan, but he won't run from his responsibilities. He'll step up and be the best man he can, even if he doesn't have a clue where to begin. The more time he spends with Claire, though, the more he wants her, and the harder it is to get close, because that would mean sharing the one thing he hasn't with anyone--the truth and his heart.

The Best Man’s Baby is my first Victoria James book.  I can say without a DOUBT, it will not be my last.  I was sucked into the book immediately.  I couldn’t wait to find out the secret Jake was carrying around and the outcome for this couple.


Claire Holbrook is the best friend of Jake’s new sister-in-law, Holly.  Holly and Quinn Manning’s story is told in A Risk Worth Taking.  The Best Man’s Baby starts out at the wedding reception of Holly and Quinn.  Claire decides to be wild for one night and comes on to Jake.  Jake decides that he’s tired of fighting his attraction to Claire and the two take things to a hotel room upstairs.  Afterwards, Jake leaves a heartbroken Claire and disappears for six weeks.  When these two come face to face again, things get a little heated and embarrassing to say the least.  Let’s just say some things do not go well with a burger.  But this is a confrontation that will change their lives forever.


Claire has always has been the good girl trying to do the right thing.  She has issues from her childhood that she thinks she’s overcome but hasn’t.  She’s a successful florist and has a killer personality.  When pushed to the limit, she has a backbone that’s to be admired.  Jake Manning is a tortured soul who doesn’t really know where he fits in.  At a young age, he learned something about himself and still fifteen years later is trying to overcome it.  It’s a secret he has kept from everyone, except for one person.  Jake has a history of running when things appear to be too serious, but his running is really only just a cover.


When Jake learns he’s going to be a father, he immediately steps up and is willing to do whatever is necessary to be the ONLY father in his child’s life. Claire refuses to let this be easy for Jake, but Jake refuses to take no for an answer.  The journey these two go on is frustrating, touching, heart-wrenching, and amazing all at the same time.  It takes one night of passion and weeks of struggling for Jake and Claire to achieve what they want and need the most in life, freedom from the past and a future full of happiness.


There are not enough words to express how much I loved this story. Writing this review was extremely hard to do without spilling all the details.  The Best Man’s Baby is a great story that I did not want to end.

Purchase The Best Man’s Baby from Amazon and other eRetailers