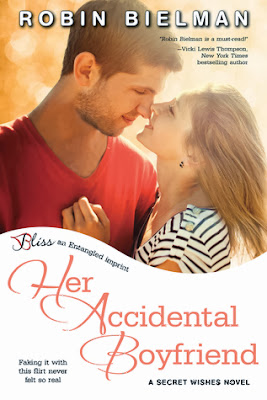 Faking it with this flirt never felt so real...
Kagan Owens has a secret. One she thought she’d escaped by leaving New York, but when her past follows her to her temporary new life, Kagan lets a teeny lie slip. And now the town’s biggest playboy and flirt, Shane Sullivan, has become her pretend boyfriend—just until she’s ready to return to NYC. But the handsome, fun-loving Shane makes it tough to determine where their friendly agreement begins and ends…
Shane has no intention of settling down—in fact, his job depends on it, and nothing’s more important than his work. Still, he can’t help but agree to Kagan’s scheme, if only to find out more about the mysterious beauty. But when every touch from her sets his heart and body on fire, he realizes playing an accidental boyfriend may be more than this he bargained for—and more than he can give.

HER ACCIDENTAL BOYFRIEND is part of the Secret Wishes Novel Series.  Honestly, the series title really does sum of the books in the series very well.  HER ACCIDENTAL BOYFRIEND is the story of a woman whose wish is to find out what she really wants out of life and in the process finds the one man who will make it his mission to watch her spread her wings and become the woman she is meant to be.
Kagan Owens is a big city girl who’s hiding a secret.  She’s moved from New York to Cascade, Oregon and is trying to find her way, without her father’s control or influence.  Shane Sullivan is the hometown boy of Cascade, Oregon.  Shane is known as a playboy.  But he’s so much more than what he allows people to see.  He has a reason for his playboy ways, but he doesn’t share that reason with anyone until Kagan comes into his life.
When Kagan’s past shows up on her doorstep, she asks Shane to pretend to be her boyfriend.  From that point on, Kagan’s accidental boyfriend becomes so much more.  Who says all accidents are bad?  These are two characters you will fall in love with and root for.  And of course, the happy ending declaration of love is one of the reasons why I love Entangled’s Bliss line.
One of my favorite quotes from the book:
I want to help you spread your wings and watch you become the woman you're destined to be.
Rating: 4
Release Date: October 14, 2013
Book Length: 240 pages
Source: Publisher ~ Entangled Bliss
Reviewed by: Kim
Reading Format: Available only in eBook


Purchase from Amazon or your favorite eRetailer