Review ~ 'TIS THE SEASON TO BE KISSED by Amy Andrews 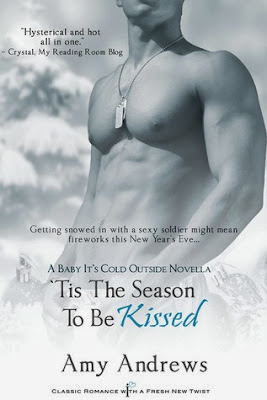 A down-on-her-romantic-luck kindergarten teacher plans to drown her New Year’s Eve sorrows in a gallon of spiked eggnog, but the arrival of her best friend's sexy brother threatens to melt the snow piling up outside the tiny Vermont cabin.

REVIEW
It’s New Year’s Eve and Tamara, a Kindergarten teacher, has decided not to go to New York City with her friend, Georgia, to watch the ball drop.  Instead, she’s spending New Year’s Eve alone at a cabin owned by Georgia’s parents.
Sergeant Luke Jackson wants to surprise his older sister, Georgia for her birthday.  He spends thirty-six hours traveling from Afghanistan to the U.S.  Due to a horrible snowstorm, he ends up going to his family’s cabin in Vermont.  After walking two miles through a blizzard, Luke is greeted by an unexpected golf club wielding guest.
It’s fifteen hours until midnight and Tamara is already drunk on eggnog.  Because she knows that kissing leads to other things, she has a ten date rule, before she will kiss a guy.  But when the sexy soldier shows up, she starts to question her own ten date rule.  Tamara is definitely attracted to Luke, but he’s off limits, since he’s her friend’s brother.  Luke desperately wants to be Tamara’s New Year’s Eve kiss.  Over the course of twelve hours, Luke manages to pull off ten non-traditional, yet fun and sometimes romantic dates with Tamara.  Once the kiss is granted it could be the start of something permanent and forever for both of them.
‘Tis the Season to be Kissed is more of a happy for now story, than a happily ever after story.
Rating: 4
Release Date: November 15, 2013
Book Length: 70 pages
Source: Publisher
4Reviewed by: Kim
Reading format: Available only in eBook