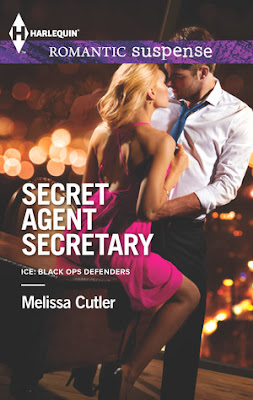 Passion ignites after office hours in this installment of the ICE: Black Ops Defenders miniseries
Bullets whizzed past as Ryan Reitano and Avery Meadows escaped into the night. How could Ryan have suspected Avery of being the mole inside ICE? It was true she was no ordinary secretary. The way she used her wits and her lethal stiletto heels against the gunmen pursuing them astonished the jaded agent. And that killer body he'd somehow never noticed before…
Too bad there wasn't time to explore the possibilities. With Chiara's men hot on their trail, capturing the mercenary was more than just a mission for Ryan. He had his own reasons for wanting the criminal dead. But with his surprising—and utterly enchanting—new partner, perhaps there'd be a chance for romance later…if they survived.


Secret Agent Secretary is a standalone book.  However, it does contain small spoilers from the first book, Tempted Into Danger.
Agent Ryan Reitano is back in Melissa Cutler’s latest ICE: Black Ops Defenders book, Secret Agent Secretary.  This time, Ryan is solo and working in the San Diego office of ICE, trying to figure out who the mole in ICE is.  He’s also still trying to catch his archnemesis, Vincenzo Chiara.
Avery Meadows has been an ICE Secretary for the last six years.  Avery is a MAJOR spy movie/book fan.  I’m talking she has a crazy obsession.  In fact, she took the job at ICE to help live out some of her bucket list fantasies.  However, this occupation is one she keeps from her pacifist family.
For the past six months, Avery has been admiring Ryan from afar.  This New Year’s Eve, things are going to change.  Trying to help Ryan out, Avery stumbles into an ambush where Ryan is the target.  With shots being fired and bad guys dropping dead, Avery rises to the challenge to be the partner Ryan needs, in more ways than one.
While I LOVE this book, it does have a different feel from the first book in the series.  This is a romantic suspense, but it’s more heart and suspense than steamy romance.  In fact, you don’t get to the steamy romance part until about 90% into the book.  When I say “heart” I don’t mean romance or “heart” as in willing to die for your mission or objective.  But “heart” in that Ryan has a secret, which he has been hiding for the past ten years.  A secret that could get him, his family and now Avery all killed.  When it comes down to it, Ryan will do whatever is necessary to keep those he loves safe, even if it means going against orders, facing life in prison, or even death.
In addition to Ryan’s secret, there’s a little nice surprise to the book that I didn’t initially see coming.  Secret Agent Secretary will take you on an intense journey through San Diego with some laughable yet thrilling moments.  You’ll fall in love with a hero and heroine who will do anything for each other. You’ll see the lengths others will go to in order to do what they perceive is for the greater good.
Rating: 5
Release Date: January 1, 2014
Book Length: 288 pages
Source: Author & Personal Purchase
Reviewed by: Kim
Reading Format: Available in eBook and Paperback

Purchase Secret Agent Secretary from Amazon or your favorite retailer