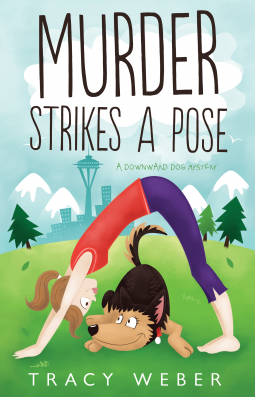 Yogi Kate becomes a Savasana sleuth in this debut mystery.
Yoga instructor Kate Davidson tries to live up to yoga’s Zen-like expectations, but it’s not easy while struggling to keep her small business afloat or dodging her best friend’s matchmaking efforts.
When George, a homeless alcoholic, and his loud, horse-sized German shepherd, Bella, start hawking newspapers outside her studio, Kate attempts to convince them to leave. Instead, the three strike up an unlikely friendship.
Then Kate finds George’s dead body. The police dismiss it as a drug-related street crime, but Kate knows he was no drug dealer. Now she must solve George’s murder and find someone willing to adopt his intimidating companion before Bella is sent to the big dog park in the sky. With the murderer on her trail, Kate has to work fast or her next Corpse Pose may be for real.
REVIEW


Murder Strikes a Pose is the first book in the A Downward Dog Mystery Series by Tracy Weber.  The story is told in first person by Kate Davidson, a yoga instructor and business owner.  It took me a little while to get into the book.  Once I did, I didn't want to stop reading.
Kate slowly befriends a homeless man named George and his German Shepherd Bella.  After hearing noise outside of her studio one night, Kate stumbles upon George’s dead body.  While the cops think George's death was simply a case of two drunks getting into an angry fight, Kate KNOWS that George wasn’t violent and would never get into a fight.  With the police dismissing her and her concerns, Kate decides to do her own investigating.
Adding to her problem of trying to find George’s killer, Kate also has to find someone to adopt George’s beloved, yet seemingly aggressive dog, Bella.  Kate doesn't want to keep Bella, but slowly Bella gets her to fall in love with her.  When it comes to rescuing animals the question is always, “Who rescued who?”  Having Bella in her life helps Kate start to heal from her own past.
With the help of her best friend, Rene, and new love interest, Michael, Kate slowly gets closer and closer to figuring out who murdered George and why.  Kate encounters countless people telling her to end her investigation for her own safety.  Just when she figures out who the killer is, she discovers her life and Bella’s are in jeopardy.  Kate only has herself and Bella to get out of this situation, but with a gun involved, the question will be if they both will survive the night.
Without any question, I’m a dog lover.  I will admit that towards the end of the book I actually cried.  I mean SERIOUSLY, who in the world cries reading a cozy mystery?  Even with that said, I’m looking forward to the next book in this series.
Rating: 4
Release Date: January 8, 2014
Book Length: 288 pages
Source: Publisher - Midnight Ink via NetGalley
Reading Format: Available in eBook and Paperback

Tracy Weber is a certified yoga teacher and the founder of Whole Life Yoga, an award-winning yoga studio in Seattle, where she currently lives with her husband and German Shepherd. Weber is a member of the Pacific Northwest Writers Association, Dog Writers Association of America, and Sisters in Crime. She loves sharing her passion for yoga and animals in any form possible. Murder Strikes a Pose is Weber’s debut.


Follow along the Murder Strikes a Pose blog tour here.

Thanks to Tracy, I’m able to giveaway one autographed copy of Murder Strikes a Pose.  US addresses ONLY.  Please follow the Rafflecopter instructions below.