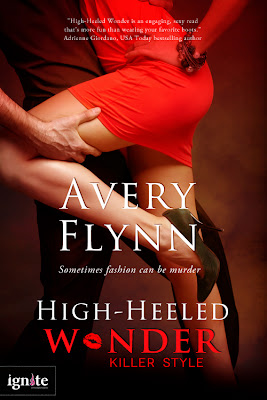 Sylvie Bissette may be one of Harbor City’s youngest glitterati, but only her best friends know her most closely guarded secret. She’s the woman behind The High-Heeled Wonder, a must-read blog for fashionistas everywhere. Gossip, fashion advice, exposés. Too bad some people can’t take a little criticism. When an internet troll discovers her secret identity and escalates from stalking her to threatening her life, Sylvie turns to security expert Tony Falcon for help. The investigator from the other side of the tracks is the olive oil to her Evian water and aggravates her to no end, but it’s not just her temper he’s inciting...
Tony Falcon wouldn't know a kitten heel from a tabby cat, but since most of the bad guys he tracks down aren't wearing stilettos, it's never been a problem...until he meets Sylvie. When a murder investigation leads him to the same place Sylvie works, he realizes the feisty fashionista may be his best chance at catching the criminals who killed his best friend. It all leads back to the cut-throat fashion world. But solving that case means going after the people Sylvie cares about, and soon his attraction for her—and the danger she’s in—has him wondering if solving the case is worth hurting the woman he can’t stop fantasizing about…


When Sylvie’s almost run over in broad daylight, Tony goes undercover as her boyfriend to infiltrate the close-knit fashion community. And when they discover Sylvie’s stalker may be linked to Tony’s own investigation, what started as a simple plan to find his friend’s killers turns into a hot bed of secrets and revelations. In a world full of overblown egos and dog-eat-dog ambition, Tony and Sylvie must work together to find her revenge-obsessed stalker before Sylvie ends up with a literal knife in the back.

Check out this awesome book trailer for High-Heeled Wonder.

Ladies, Meet Tony
By Avery Flynn
Who doesn’t love a hot Italian private investigator/former vice detective with an over developed protective instinct, a banged-up heart and the ability to make pasta sauce from scratch?
You do? Awesome. Sit down and enjoy a little Tony Falcon time.
Wait, some of you don’t go for the Tony type? Le sigh. Ladies, gents … give him a chance. He’ll win you over.
Hey there Tony, tell us a little about yourself.
What’s there to say? I’m from the working class neighborhoods of Waterburg. I own Maltese Security. I go to Paulie’s Gym daily, restore motorcycles and have a muscle car with a false trunk.
That sounds … interesting. How did you come up with the name Maltese Security?
You’re kidding right? Have you seen the movie Maltese Falcon? Humphrey Bogart as Sam Spade? The search for a jewel-encrusted falcon?
Ah, and you’re Tony Falcon.
Bingo.
So it doesn’t seem like you’re a huge talker.
Only when it matters.
And does it matter when Sylvie’s involved?
*Gaze slides to the left.* Maybe.
Come on. You can’t leave it like that. I’ll call your second-in-command, Cam, and get the whole story out of him.
Ugh. That dude never shuts up. Okay, yes when it comes to Sylvie it matters. In a professional way. She does have a stalker after her who has stepped up his game. The perp has moved from threatening e-mails to trying to run her down in broad daylight.
And it doesn’t hurt that she’s totally hot.
I can’t deny it. But she’s not my type. She’s a fashion princess, a rich girl with connections. She’s all about purses and shoes. I’m about guns and ammo. Our paths don’t exactly cross.
But now you’re posing as her boyfriend.
Just to get intel to track down her stalker.
So no *ahem* perks?
None at all. She’s a client. End of story. It’s ridiculous to even think that. I’ve never even considered it.
Sounds like you’re protesting a bit much.
*Hard glare.* Interview over.
Okay, he’s a bit of the strong, silent, alpha type, but oh he gives me the shivers. I mean Sylvie. He gives Sylvie the shivers.
Damn.
That was embarrassing.

Avery Flynn has three slightly-wild children, loves a hockey-addicted husband and is desperately hoping someone invents the coffee IV drip.
Avery was a reader before she was a writer and hopes to always be both. She loves to write about smartass alpha heroes who are as good with a quip as they are with their *ahem* other God-given talents. Her heroines are feisty, fierce and fantastic. Brainy and brave, these ladies know how to stand on their own two feet and knock the bad guys off theirs.
Also, if you figure out how to send Oreos through the Internet, she'll be your best friend for life.
She'd love to hear from you!