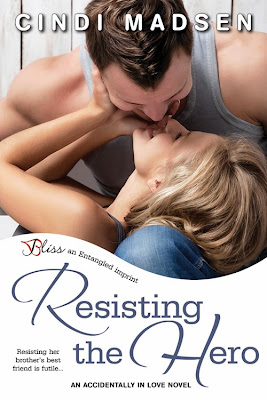 Resisting her brother’s best friend is futile…
Faith Fitzpatrick isn’t looking for a hero. Burned one too many times in the past, she’s now sworn them off completely. And when her brother’s best friend, Connor, convinces him to join the dangerous SWAT team, Faith has never been more anti-hero. What’s wrong with having a safe job? There’s nothing safe about Connor. Confident, sexy, and sporting a six-pack that should be illegal, he’s everything she doesn’t want.
When his best friend’s sister moves to town, local cop Connor Maguire knows he’s in trouble. Faith is feisty, funny, and talks trash like nobody’s business. She’s also his partner’s sister—and so totally off limits. Working on the Fall Festival together, they agree to a truce and become friends. But the more time Connor spends with Faith, the more he’s willing to risk the wrath of her brother. If he could only convince her to take a risk on him, too.

Hi Cindi.  Welcome to Read Your Writes Book Reviews.  I’m SO excited you could stop by today.
Yay! Thanks for having me. I’m excited to be here.
You definitely have a new fan for your Accidentally In Love Series… ME!! I fell in love with the series just from reading An Officer and a Rebel. Now, I’m going to go back and read the other books.  For others new to you and the series as well, could you tell us about it?
Well, first of all, thanks! That makes me so happy. The series started with best friends who faked an engagement in Falling for Her Fiancé. When I decided to write a series & expand that book into two more that tied in, I thought what do I want these books to have in common? And it was that they all don’t mean to fall in love, but before they know it, they’re accidentally in love and have to figure out what to do about it. (The answer is usually lots of kissing. LOL)
Can you tell us a little bit about Faith and Connor?
Connor’s a bit of a bad boy cop, used to having girls swoon with a simple smile, and he’s not so sure love has any place in his life. But once he meets his best friend’s little sister, he has a hard time getting the sexy trash-talker off his mind. Faith lost her cop father young thanks to his being a hero, so she’s set against guys with a hero complex, and after recently having her heart stomped on, even more set against player types. Connor’s both wrapped into one, so definitely not an option. As much as she wants to, though, it’s hard to deny the chemistry she and Connor have. They have a lot of push and pull and challenge each other, sometimes to the point of driving each other crazy.
Was there anything about Faith and Connor that surprised you?
About half of what came out of Connor’s mouth made me laugh and shake my head. I swear, I could hardly control him. I had his story in my head, but I was also surprised at how emotional I got when he finally opens up to Faith, and how it affects her as well.
Is this the final book in the series?  If it is, what are you going to miss most?
Yes, it is the final book, and as I was realizing that during writing the acknowledgements, I was almost like wait, I’m not ready for it to end. I joke to people that I’ve lived in North Carolina for the past year, because that’s where my series takes place. Funny enough I simply picked it for Falling for Her Fiancé, not really thinking about it. I have people say I got it right and I’m like yay for Google! Someday I hope to visit some of the places I’ve written about. As for what I’m gonna miss, I’m definitely going to miss the cameos from the series and that southern small town feel—I just had so much fun writing about the Lake Norman area. But I’m also excited to start on my series that’ll kick off with a hot cowboy on a ranch. It’s a story I’ve had in my head for years, so it’ll be nice to finally get it on paper.
If you could pick one character from the series to spend the day with who would it be and why?
I really love Brynn and how she looks at the world, but I think I’m gonna go with Wes, simply because I’d really love for him to take me on a helicopter tour. I’d choose one of the milder adventures for sure—no diving out of the helicopter for me, but I’ve always wanted to ride in one.
(Bouncing up and down in my seat!) I LOVE Wes!!!! He’s just the BEST.  But you already know this and you’re probably tired of me telling you.  What’s a perfect day for you?
Well that makes me smile.  Anytime I get to hang with friends and family, I’m happy. I also love to eat out. And if there’s a beach close and it’s warm, I’m even happier. So I’d probably say a day at the beach with all my family and friends, followed by a nice steak dinner.
Thank you so much Cindi for taking the time to talk with me and my followers.
Thanks so much! I’m always happy to talk writing, and that was a fun interview. 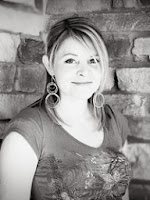 Cindi Madsen sits at her computer every chance she gets, plotting revising, and falling in love with her characters. Sometimes it makes her a crazy person. Without it, she’d be even crazier. She has way too many shoes, but can always find a reason to buy a new pretty pair, especially if they’re sparkly, colorful, or super tall. She loves music, dancing, and wishes summer lasted all year long.
She lives in Colorado (where summer is most definitely NOT all year long) with her husband and three children. She is the author of YA novels All the Broken Pieces and Demons of the Sun, adult contemporary romances Falling for Her Fiancé and Act Like You love Me, and the women's fiction novel Cinderella Screwed Me Over.