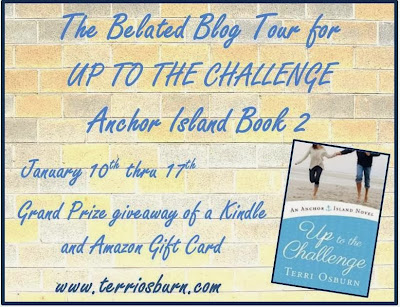 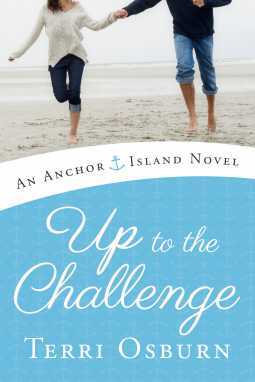 Opposites attract in a sexy tale of unexpected love
When the Dempsey patriarch suffers a heart attack, Lucas Dempsey steps up to keep the doors of the family restaurant open. The proverbial prodigal son returns home to Anchor Island—putting family first and his quest to make partner at his high-powered law firm on hold. Sporting a bruised ego after losing his fiancée to his older brother, Lucas would rather walk on glass than spend six weeks within spitting distance of the happy couple. But family duty calls. And that duty includes working side-by-side with a tantalizing spitfire intent on driving him mad.
Tough-as-nails boat mechanic Sid Navarro is happy to trade her tools for an apron to help the Dempseys in their time of need. That is, until she realizes she’ll be working alongside Lucas, the man she’s loved from afar since she first laid eyes on him in high school. Lucas could charm the paint off a schooner, but Sid knows she doesn’t fit his girl-next-door type. To show her true feelings would mean certain heartbreak, but the temptation of Lucas in her bed might be more than she can resist.
After a rocky start punctuated by verbal barbs and exasperating arguments, things heat up between them—big-time—but their steamy affair turns more than casual in a matter of weeks. Sid’s life has become the dream she’s always wanted, and Lucas has fallen hard for the last woman he ever expected to love.
But this affair has an end-date, as Lucas must return to his life and career in the big city, a place where Sid would never fit in. When the end comes earlier than expected, walking away turns out to be a challenge neither of them wants to win.
Up to the Challenge is a sexy, fast-paced, romantic story of family, island life, and finding love in unexpected places.

Lucas turned to see Sid Navarro coming down the hall. The pint-sized boat mechanic had been on the fringe of his reality since high school, but he wouldn’t say they were friends. Not like she and Joe were. In fact, Lucas couldn’t remember ever having a real conversation with the woman.
Every time he saw her, she was either snarling at someone, or covered in grease and cursing a blue streak. She had to be the least ladylike chick he’d ever met.
“How’s it going?” Sid said, joining him at the machine. He expected an assault of diesel fumes but instead caught the scent of . . . watermelon?
“Hi.”
Chocolate brown eyes met his for a brief moment, then turned to the display of junk food. “You getting something?”
“Trying to.” He pulled his eyes from the smooth patch of olive skin exposed under her ponytail. “The machine is holding my chips for ransom, and I’m not paying. Guess I’ll go without.”
“I wouldn’t say that.” Sid stepped forward and pressed her ear to the side of the worthless box of bolts.
As she moved to listen at another spot, Lucas asked, “What are you—” but she shushed him with one finger in front of his nose. His mouth clamped shut.
Pulling back, Sid smacked the side of the machine with the butt of her hand, causing his chips to drop into the tray. He’d smacked the damn thing twice and gotten nothing.
“How did you do that?”
Sid shrugged. “I’ve got a way with machines. Are those the right chips?”
“Yeah.” Lucas pushed the door to retrieve the snack as Sid pulled a wallet from her back pocket. “You don’t carry a purse?”
She looked at him as if he’d asked if she had meth for sale. “Do I look like a purse carrier to you?”
He took in the hoodie, cargo pants, and work boots. “Guess not.”
“You good with this working together thing?” she asked, falling into step beside him, after retrieving her candy bar from the drawer. Which fell on the first try.
“Fine with me. You probably know the staff better than I do. That should help until I get my bearings and the staff realizes I’m in charge.”
Sid stopped. “You’re in charge?”
Lucas crossed his arms, nearly smashing his chips. “It is my family’s business.”
She crossed her arms, mimicking his stance. Her head didn’t reach his shoulder but she still managed to look like a badass. Must have been the boots. “I’m covering for Patty, who is as much in charge, if not more so, than your dad. So you may be in charge of everyone else, but you’re not in charge of me.”
Lucas debated how to handle the situation. He was used to being in charge, leading the team. Having a coleader would be something new. Running a restaurant wasn’t the same as running a legal team, and deep down, he knew he needed her. He could always take the upper hand later if necessary.
“Equals?”
“That’s right.”
“We’ll see.” Not the strongest comeback, but for a tiny woman, Sid had a steady gaze.
“For a lawyer, you suck at this.” Sid started walking again, then turned back to face him. “I hope you tend bar better than you argue, or I’m going to have to cover the whole damn place.”
With that she disappeared into the hospital room, leaving Lucas in the hall with a bag of crushed chips and a bruised ego. Six weeks in hell had officially begun.

Keeping It Real
Thank you Kim for letting me bring the Belated Blog Tour for UP TO THE CHALLENGE to the Read Your Writes Book Review blog. You've been an amazing supporter of mine from the very beginning and I will always be grateful for that.
I have been fortunate in my short publishing career to receive a respectable number of reviews. For the most part, they have been quite positive. (Thank my lucky stars!) One recurring comment is that my characters are very real. I get quotes like "The Dempsey family felt like people you could relate to, and Sid felt like someone I'd be friends with" and "From the very beginning I fell in love with the fact Sid and Lucas were both REAL."
These comments made me realize that this is why I love small town contemporary romances. Not to knock any other sub-genre of romance, as they all have their own attraction, but the small town stories feature characters I might know in real life. They're often hard-working people with real jobs dealing with the same issues many of us face in our day to day lives.
On Anchor Island, tourism is the main industry. That means no tourists, no island. So when the yearly statistics start dropping, everyone takes notice. My books never involve the life and death situations of a thriller, romantic suspense, or even paranormal, but to these characters, this is life or death. The life or death of their businesses and livelihoods.
When I started writing, I didn't sit down and try to create the most real characters and situations I could. We've all heard the old adage—write what you know. This is what I know. I've never been extravagantly wealthy, or enjoyed the luxury of flitting about the planet as a globe-trotting heiress. But I have lived in small towns and known what it's like to work for a living and put your heart into something.
The chance to watch two characters with whom I can relate fall head over heels in love is the added bonus that gives us all something to sigh about in the end.
How about you? Do you like characters who feel like they could live next door, or would you rather leave the real world and spend some time with the billionaire shape-shifting characters out there saving the world? (Hint: there's no wrong answer here. *G*)
One lucky commenter today will win a kindle copy of UP TO THE CHALLENGE, and if you hop over to the contest page on my website, you can enter for the Belated Blog tour grand prize of a brand new Kindle and a $10 Amazon gift card to get you started. Enter early and often! 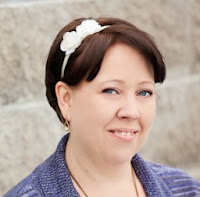 Although born in the Ohio Valley, Terri Osburn found her true home between the covers of her favorite books. Classics like The Wizard of Oz and Little Women filled her childhood, and the genre of romance beckoned during her teen years. While Osburn went on to gain a degree in business administration, she couldn’t shelve her love of love stories. In 2007, she decided to put pen to paper and write her own. Just five years later, she was named a 2012 finalist for the Romance Writers of America® Golden Heart® Award. The author of the Anchor Island contemporary romance series, Osburn resides in Virginia with her daughter, an assortment of pets, and her bookshelves full of keepers. To learn more about this author and her work, visit her website at www.terriosburn.com.