Review ~ In Bed with Mr. Wrong by Katee Robert 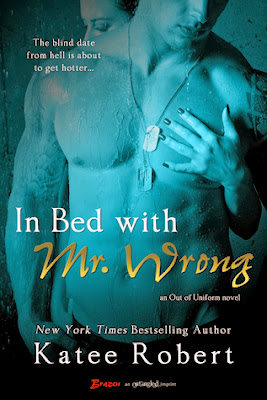 The blind date from hell is about to get hotter…

Brianne Nave is never doing her friends a favor again. When they begged her to go on a blind date, she didn’t expect someone so perfectly gorgeous. She’s a mousy librarian—totally not in this man’s league. And judging by his odd reaction when she opens the door, he knows it, too.
Air Force Pararescuer Ryan Flannery avoids his hometown at all costs. He’s not thrilled about the date until he’s shocked silent by the prickly little librarian’s sweet curves and kissable lips…and her smart mouth. But then an argument leads to a kiss that spirals out of control. How can two people have so little chemistry outside the bedroom when they fit together so perfectly in it?
When their friends strand them in a cabin to "work things out," Bri’s not sure whether to kill him or put the industrial-sized box of condoms they find to use. Bottom line—Ryan’s career military and hates the tiny town she loves. He’ll leave, just like everyone else in her life. And if she’s foolish enough to give him her heart, he’ll take it with him.


REVIEW
Brianne Neve is a librarian and is relatively new to the small town of Wellingford, Pennsylvania.  In fact she’s been in town for about fourteen months and only has two close friends, Avery and Drew.  For Bri, she likes to keep herself closed off in order to avoid getting too close to people who might leave her.  After losing her parents at an early age and then aging out of the foster care system, this is Bri’s only way to survive.
Ryan Flannery hasn’t had the best life.  He’s made mistakes that the people of his hometown of Willingford are more than happy to continue to talk about more than ten years later.  He’s gone on to become the best that the Air Force has to offer, a Pararescuer.  Unfortunately, this and his other accomplishments aren’t what he hears people talking about.  He likes to avoid Wellingford at all costs.
Talk about a crazy enemies to lovers romance.  In Bed with Mr. Wrong was a story that had me smiling from the very beginning.  Bri and Ryan agree to a blind date with each other under false pretenses.  Bri agreed to go out with Ryan because she was helping out her friends Avery and Drew by not “leaving Ryan to his own devices.”  Ryan agreed to go out with Bri because Avery and Drew (his brother) said she was new to town and needed someone to show her a good time.  Needless to say, things don’t go very well on the date.
Bri and Ryan may fight like cats and dogs but their attraction to one another can NOT be denied.  When tempers get in the way, the physical attraction is too much to not act on.  Ryan takes Bri out of her comfort zone in more ways than one and gets under her skin like no one else.
Avery and Drew are so sure that Bri and Ryan are right for each other, they set up an intervention and leave the two stranded in a well-stocked secluded cabin in the woods alone for three days.  When Ryan and Bri aren’t arguing with each other, they can’t keep their hands off of each other.  Just when things start to look up for these two, Bri’s fear of being left alone tears them apart.  They will have to fight for the love they never knew they wanted.
Rating: 4
Release Date: January 13, 2014
Book Length: 250 pages
Source: Publisher, Entangled Publishing
Reviewed by: Kim
Reading Format: Available only in eBook