An interview with Cristin Harber ~ author of The Titan Series

Cristin Harber is now one of my favorite authors.  A couple of months ago I was part of her Winters Heat blog tour.  I read an excerpt and was hooked.  After I read the book, I actually begged her for an interview.  I’m seriously all about Titan Group at this moment.  So far, I’ve read two of her books and I can’t wait to find the time to read the rest of the series.  The men from Titan are alpha men at their best.  They will do whatever is necessary to make sure their family and the women they are alright.  And when they finally confess their love, it’s simply swoon worthy.

Hi Cristin.  Welcome to Read Your Writes Book Reviews.  I’m SO excited you could stop by today.

Yay! I’m excited to be here too. I love chatting all things Titan.

I read an excerpt for Winters Heat and was done. I knew I had to read the book and immediately purchased it.  It did however take me awhile to read the book.  But it was everything I thought it would be, with several surprises. How did you come up with the idea for the series?
I was working on another series idea when I had a c-section. While I was laid up with a newborn and nursing all the time I watched Die Hard movies, which I just love, and had my favorites books on hand—Maya Banks (KGI) and Lora Leigh (Elite Ops). So Titan Group was born out of sleep deprivation, Bruce Willis yelling yippe-kay-yay-m***, and some of my fave sexy black ops dudes.
Could you please tell about Team Titan?  Who are the guys? What are their personalities like? What do they do or better yet, what’s their specialty?
Oh, the Titan guys. So you’ve met Winters. Badass with a secret soft side. The man can survive anything and good thing because he’s put to the test.
Cash Garrison is a sniper who rocks a cowboy hat and a lazy grin. He makes my heart flutter, and is my favorite (I know I shouldn’t have them, but I love him SO much). Cash can take two words—sweet girl—and turn a woman into a puddle of goo.
Jared Westin owns the Titan Group. His ego and attitude go hand in hand with his talents. Not much he can’t do… take that however you like to. (Wink)
Brock is Jared’s right hand man. Loyalty is his thing. Family is too. When the two collide, his life gets wild.
Rocco Savage can fly and drive anything. He’s moving up the ranks in the Titan Group and has a serious reality TV show addiction (think Top Shot and Survive This, NOT American Idol). When it comes time to find love, he finds out that a sexy Spaniard’s accent is his crack and has a very emotional story to tell.
Roman and Parker will step into the limelight this year. Roman is Cash’s best friend, though they’d tell us guys don’t do BFFs, and Parker is a tech-genius-alpha-soldier combo.
Then there’s the Delta team. Rarely mentioned. Kind of like Fight Club—you don’t see ‘em, don’t talk about ‘em… those boys just exists.
Seriously can’t wait to read more of the books!!!!  The Titan Group is made up of some serious alpha men.  Which man did you have in your head first?
Winters came to mind first. Jared was a quick second because Winters needed somebody to banter with. What’s better than two alpha talking about saving the day?
Cash is your favorite.  Why?
I love Cash. He’s so dang sweet and sexy. He was also the hardest to write when it came to the sex scenes but those turned out to be HAWT. I’m in the process of writing the prequel to Garrison’s Creed. So, I’m in my happy place.
Cash is definitely something!  (Dreamy eyes...)  What's next for you?
There are two more Titan boys. Roman and Parker. There’s also a small subsect of Titan that makes more of an appearance during Savage Secrets. They’re called Delta Team, and we’ll have to see what, if anything, happens with those boys.
Thank you so much for taking the time to answer some questions for me.  Is there anything else you would like to add?
I’m a new author (Winters Heat came out about five months ago). I can’t begin to describe how wow-ed I am with the support and love for Titan. Reviews mean the world to me, and I appreciate you more than you know. (Smiles)
Savage Secrets comes out on February 24th. Get your virtual release party on from February 24th to March 2nd on Facebook.
Cash and Nicola’s prequel is called Sweet Girl (and I just saw my cover mock up—favorite cover ever) and that will be late Spring/early Summer. Keep an eye out for them!
Thanks for having me. It was a blast to chat with you. (Heart) ya!

The Titan Series (Boxed Set, including the novellas): 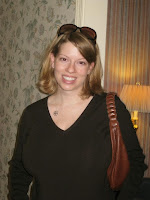 MOM. WIFE. AUTHOR.
Lover of all things sexy and happily ever after.
I live outside Washington, DC with my family: my husband (who doesn’t mind my collection of book boyfriends), an independent toddler, and an English bulldog named Britta who loves to be a conversation piece. Oh, we have a baby on the way—arriving about the same time as WINTERS HEAT debuts!
I love southern food, listen to country music, am always too hot or too cold, and spend hours reading and writing. I cheer on my University of Louisville Cardinals-GO CARDS! When I’m not pregnant (or nursing), I like a little bourbon or sweet wine. Pregnant or not, I love a lot of chocolate.
I can’t save the world, so instead, I write about those that do. There’s a special place in my heart for those who keep us safe.
Places to find Cristin Harber:
Website | Facebook | Twitter | Goodreads