4.5 Star Review ~ HIS TO KEEP by Katee Robert 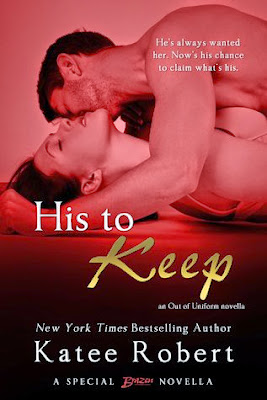 He’s always wanted her. Now’s his chance to claim what’s his.


School teacher Marceline Bellini gave up everything—men, sex, anything resembling a social life—to raise her young daughter. To be the perfect parent. But when she attends an engagement party in her standard stick-in-the-mud mode, her friends begin plying Marcy with shots. Just enough to convince her that a little fun doesn't sound like a bad idea... and having some naughty fun is an even better one.

Like finding herself deliciously pressed against a dark alley wall by the very familiar and very hot body of her best friend's older brother.

After years of waiting in painful silence, police officer Aaron Robinson finally has Marcy’s attention. And man, does he have it. But nothing could have prepared either of them for the rush of fiery lust between them. So he’ll just have to convince Marcy he’s for real. And that a rainy, lust-fuelled romp is the first step to a lifetime of completely imperfect happiness…

REVIEW
His to Keep is a sweet hot little read about a super serious girl falling in love with her best friend’s older brother.

Marceline “Marcy” Bellini and Aaron Robinson have had feelings for each other for years.  Aaron is an older brother who always looked out for his younger sister and her best friend.  During a leave from military service, Aaron returned home to find a grown-up Marcy; only she was dating someone who would break her heart and leave her pregnant.

Since her break up and unexpected pregnancy, Marcy has put her social love life on hold.  Her focus turned to graduating from college and taking care of her daughter.  She refused to let another man throw off her current goal in life. Until.....one too many shots.

Did I mention this was a hot little book?  Well, it is.  It takes these two awhile to make it to an actual bed, but that doesn’t mean there weren’t screams in other locations.

Aaron makes Marcy forget to think, leading her to take risks that are out of character for her.  This scares Marcy and makes her just want to run.  But if a cop can’t catch you, who can?  Aaron is a great guy and if you don’t fall in love with him during the main part of the book, by the the time you get to end, you will simply be swooning and wishing you were Marcy.

His to Keep is part of the Out of Uniform series.  It is a standalone but I think you might get a little more out of the book, if you read the first book.  However, this really isn’t a requirement.

Purchase His to Keep from Amazon or your favorite eRetailer

The Out of Uniform Series:

My review of In Bed with Mr. Wrong