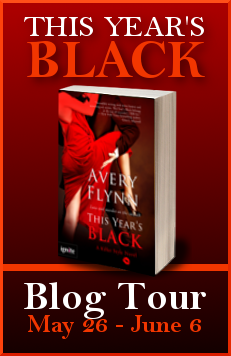 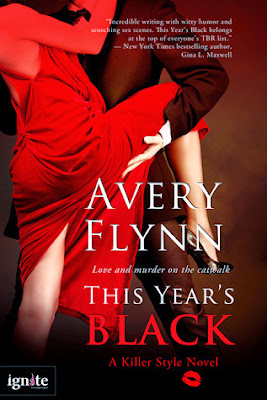 A fighter since birth, Allegra "Ryder" Falcon would rather trade in her all-black wardrobe for head-to-toe hot pink than let anyone ever see the cracks in her tough exterior. But one night with a stranger changes everything.
Devin Harris may have given up his MMA fighting dreams for high fashion, but that doesn't mean he isn't always in control. So when someone embezzles millions under his watch, he isn't going to let the private investigator working the case go it alone--even if she is the woman who blew him away in bed and then blew him off.
Just when it seems like it couldn't get any hotter between Ryder and Devin, the case takes them to a tropical paradise where the danger increases. From the catwalk to the pineapple fields, they have to work together to track down the missing millions before the thief finds--and kills--them.

This Year’s Black is only the second book I’ve read from Avery Flynn.  I have to say I really like her writing style.  Avery writes heroines who are strong, independent, and take no prisoners.  While this is the second book in the Killer Style series, it is a standalone read.  But if you’re like me and haven’t read High-Heeled Wonder, this book will have you wanting to read it.

After an abusive relationship, Ryder Falcon is taking a break from dating.  She now has a one-time hook up rule.  After the hook up, she’s gone like a thief in the night.  Never to be seen or heard from again.  For awhile, Ryder was good at doing this, until she ended up in bed with him.

The him would be former MMA fighter turned General Merchandise Manager and right hand man to the CEO of Dylan’s Department Stores, Devin Harris. Devin tried calling Ryder so many times, she had to block his number.

Ryder has been working for her brother’s security company, Maltese Security. So far, her only assignments have been pretty boring.  I mean seriously, there are only so many cheating spouse cases a girl can take.  But Ryder’s luck is about to change when she gets called in to investigate an embezzlement case. Finally, it’s time to put her forensic accounting degree to use.  Ryder is on a high until she walks into the executive offices of Dylan’s Department Stores and discovers Devin is her new client contact.

After discovering the embezzlement goes back further than expected and the amount of money missing is greater, Ryder and Devin must travel to the tropical paradise island of Andol to get the money and bring back the embezzler.  Piece of cake.  Until you factor in the strong feelings that still exist between the two.  Add to that, their element of surprise has been taken away from them and they are receiving threats.  Worst of all, because of the nature of the island, no one will help them.  Not even the police.

Unlike most romantic suspense books I've read, the main character of This Year's Black is the heroine.  I loved that!!! Ryder isn't a damsel in need of being rescued.  She's the one who's kicking butt and takin names. Not that Devin can't and doesn't hold his own, because he can and does.  I found the book to be intense but not as intense as some romantic suspense books.  And when you talk romance, it's very hot between these two.  I finally understand how people can get busy when they're in trouble.

The suspense/action is slow building.  Meaning that it isn't immediately there. But when it comes, it's good. Ryder has a never give up attitude which at times serves her well.  But when things turn bad, she’s going to have to learn how to ask for help and work as a team and realize that it isn’t just her against the world.

Avery Flynn has three slightly-wild children, loves a hockey-addicted husband and is desperately hoping someone invents the coffee IV drip.
She fell in love with romance while reading Johanna Lindsey’s Mallory books. It wasn’t long before Avery had read through all the romance offerings at her local library. Needing a romance fix, she turned to Harlequin’s four books a month home delivery service to ease the withdrawal symptoms. That worked for a short time, but it wasn’t long before the local book stores’ staffs knew her by name.
Avery was a reader before she was a writer and hopes to always be both. She loves to write about smartass alpha heroes who are as good with a quip as they are with their *ahem* other God-given talents. Her heroines are feisty, fierce and fantastic. Brainy and brave, these ladies know how to stand on their own two feet and knock the bad guys off theirs.