Review ~ BAITING THE MAID OF HONOR by Tessa Bailey 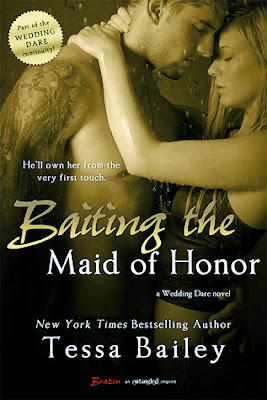 He’ll own her from the very first touch.


Julie Piper and Reed Lawson have nothing in common. She’s a people-pleasing sorority girl hiding behind her perfect mask. He’s a take-no-prisoners SWAT commander who isolates himself from the world. But when they’re forced together at their friends’ posh destination wedding, one thing is clear—Reed wants Julie more than he wants his next breath. Which is why he’s not about to stand by when she’s dared to seduce another man.

Julie wants neat, tidy sex, so she could get back to what she does best—making everybody else happy. She never expected to slip into a dark bedroom and have her mind blown by rough, demanding hands, and a sinfully filthy mouth—neither of which belong to the best man.
One night should have been all Reed needed to get the blond temptress out of his system, but when one taste is nowhere near enough, he’ll be forced confront the effects of his hellish past. One that may push Julie away forever…just when he realizes he can’t live without her.

Baiting the Maid of Honor marks the second time I’ve read a book by Tessa Bailey.  Tessa is known as being “The Queen of Dirty Talkers”, so I was surprised to find the book tamer than what I expected.  Don’t get me wrong, Reed is STILL intense.

Julie Piper and Reed Lawson are two people who are polar opposites.  Julie is from a rich and privileged family, with a wonderful childhood.  Reed is from the wrong side of the tracks and had a childhood full of nightmares.  His mother died when he was young and his father was verbally and physically abusive.  These two have nothing in common, except for the love they have for their friends who are getting married.

Julie is a people pleaser who has lost herself in being who people expect her to be.  Reed just shuts himself off from everyone.  Without question, there is an attraction between these two.  While Julie prepares to seduce the more appropriate best man, someone switches the room key she has stolen with Reed’s.  When the huntress becomes the hunted, she isn’t prepared for the feelings awakened by the rough and dominate Reed.

Julie and Reed are two people who are so different from each other, yet they need each other.  They need each to realize they aren’t the person they thought they were.  They also need each other to heal themselves and break the chains they have been carrying around in order to truly live life.

Baiting the Maid of Honor is the second full length novel in the the Wedding Dare Continuity series.  While it might be read as a standalone, I strongly suggest you read the rest of the series to get a better understanding of Reed’s character and background.  In particular, the story to read is Seducing the Bridesmaid by Katee Robert.

If you would like to read the series in order, this is the order you should read it in: