Review ~ FALLING FOR THE GROOMSMAN by Diane Alberts 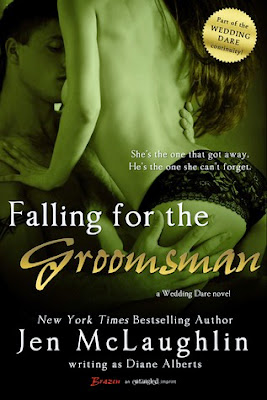 Photojournalist Christine Forsythe is ready to tackle her naughty little to-do list, and who better to tap for the job than a hot groomsman? But when she crashes into her best friend’s older brother, Christine realizes her list needs updating. And fast. Tyler Dresco took her virginity during the best night of her life, then bolted. Now that they’re trapped together at a destination wedding, she’s going to get her revenge.


Tyler has never forgiven himself for how completely he lost control all those years ago. Being in Christine’s arms had felt right…until he realized what he’d taken from her in the hallway of a cheap motel. And oh, how she’s making him pay for it now. The insatiable heat between them has only grown stronger, but every time things heat up, Christine walks away.

With every encounter, things go a little bit further until Christine’s caught in her own trap of seduction. And before their time’s up, Tyler’s not the only one wanting more…

Do you believe in second chances?  Falling for the Groomsman is all about second chances and doing whatever it takes to get the one who got away back. This is a wonderful story of a second chance at love that could possibly bring tears to your eyes.

Eight years ago, Tyler Dresco and Christine Forsythe had a magical encounter, one neither has forgotten.  The encounter left Tyler confused and running for the hills.  It left Christine heartbroken, to say the least.  Now forced to be in the same place for their sibling and friend’s wedding, they are forced to confront the past.  Even with the passage of time, Tyler and Christine still have strong feelings for each other.  Tyler is the guy Christine compares all others to and Christine is the one who captured Tyler’s heart and scared him to his core.

Christine wants to let loose during wedding week and comes up with a naughty list to show the new woman she is.  With Tyler around, she decides to use the time to get back at him for the way he treated her all those years ago.  Too bad the heart knows what the heart wants and her cat and mouse game catches up to her.

Be prepared to fall in love with this couple as they go after their happy ever after.

Falling for the Groomsman is part of the Wedding Dare Continuity series.  It can easily be read as a standalone.  However, if you would like to read the series in order, this is the order you should read it in:

Purchase Falling for the Groomsman from Amazon or your favorite eRetailer