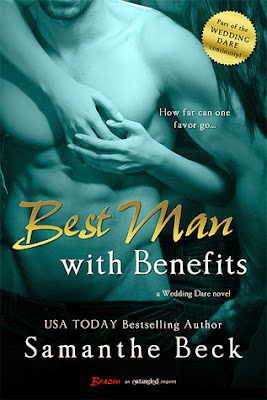 How far can one favor go…


Logan McCade arrives at his best friend’s wedding overworked and in desperate need of a vacation, only to discover his best man duties have been…expanded. He must coax Colton’s little sister out of her shell so she doesn’t hide in her room all week. Logan figures he can handle one introverted bridesmaid, but he’s not expecting how much he enjoys “handling” Sophie…or how much she enjoys being handled.

Socializing has never been web designer Sophie Brooks’s strong suit, but she’s determined to shed her wallflower image and embrace the “New Sophie”—a feat made easier with the supremely sexy Logan McCade tempting her to explore all her forbidden fantasies. If she’s not careful, she just might fall for the best man.

Sophie’s sweet, sexy, and delectably awkward demeanor brings much-needed calm to Logan’s hectic life. With the nuptials only days away, Logan is forced to face the possibility that his favor to a friend might have become something else entirely…and that he’s not willing to let Sophie go. Ever.

I will admit, I went into reading Best Man with Benefits already loving Logan. I’m completely crazy about his older brothers and KNEW he was going to be just as loveable.  Samanthe Beck definitely did not let me down with his story.

Logan McCade is a really great guy who has lost himself to his company.  He is the founder, president and CEO of Defy Gravity.  He’s consistently working and has lost track of who he is and why he started the company.

Sophie Brooks is the shy, younger sister of Colton.  Colton and Logan met freshman year of college and have been friends ever since.  Sophie has had a crush on Logan, since she meet him that first day at college.  Not only is Sophie shy, but she has been battling an image problem her whole life.

Colton asks Logan to keep an eye on Sophie and get her involved in the wedding activities.  Logan just isn’t prepared for a grown up Sophie with a rocking body.  The guy rule states that you don’t date or do anything with your best friend’s sister.  But when said little sister gives you a morning wake up call that’s too hard to resist, all bets are off.  Sophie is a shy girl, but she’s definitely hiding a vixen within.

There is SO much to love about this book.  Logan and Sophie are exactly what the other needs.  Logan brings Sophie out of her shell.  Sophie makes Logan appreciate the simpler things in life.

Best Man with Benefits wraps up the whole series nicely and gives you a mini glimpse into what’s going on with the other McCade men, as well as the characters from the rest of the series.  Of the entire series, Sophie is by far my favorite heroine.  I truly believe there’s a little Sophie in every woman.

Best Man with Benefits is a standalone read.  However, you do get a glimpse of the other Wedding Dare couples after their respective books, so in order not to give anything away, I suggest reading the entire series.

Series Order:
Dare to Resist by Laura Kaye
Falling for the Groomsman by Diane Alberts
Baiting the Maid of Honor by Tessa Bailey
Seducing the Bridesmaid by Katee Robert
Best Man with Benefits by Samanthe Beck

Purchase Best Man with Benefits from from Amazon and other eRetailers