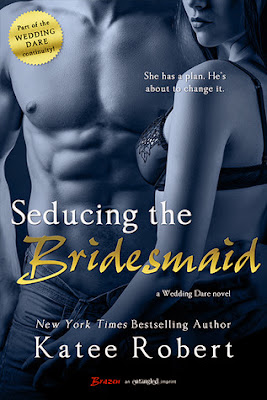 She has a plan. He’s about to change it.


Regan Wakefield is a headhunter in both name and personality: driven, motivated, and unafraid to pursue what—and who—she wants. Naturally, she’s thrilled when her friend’s wedding offers her an opportunity to score Logan McCade, the practically perfect best man. Unfortunately, groomsman Brock McNeil keeps getting in her way, riling her up in the most delicious of ways. But Brock’s smooth southern charm isn’t part of the plan…so how exactly did they end up having searing-hot sex?

REVIEW
Seducing the Bridesmaid is the third full length novel in the Wedding Dare Continuity series.  I strongly recommend that you read the entire series, in order.  Or at least read Baiting the Maid of Honor first.

I love Katee Robert’s writing.  While I wasn’t a fan of the heroine, I still liked the book.  I was honestly surprised about that.  In fact, the book left me with a happy satisfied feeling.

Regan Wakefield who is an only child has grown up to respect what it means to work hard for what you want.  She’s a planner and when she plans something, she sets out to accomplish that plan.  It doesn’t matter what she has to do or who she has to step on to achieve her goal.  I will say that Regan truly does care about her friends.  You see that in this book and more so in the proceeding books.  However, her actions early on in the this book sealed her fate with me. I mean seriously, it’s kind of hard to like a girl when she sleeps with one guy and turns around less than five minutes later and says she wants someone else and proceeds to try to get that person.  That’s a little hard to get over.

Brock McNeil is an easy going, likeable guy.  Brock has a laid back southern charm that just makes you want to smile.  He comes off as being an underachiever, but is so much more.  Because of his upbringing, he keeps his true self to himself and doesn’t let anyone know what he does behind the scenes.  And what he does do is something that’s very close to his heart and makes him that much more of a good guy.

If I had to sum up the book, I would have to say that Seducing the Bridesmaid shows that sometimes plans just need to be changed.  More specifically, what you want and what you need are two separate things.  If you allow yourself to get out of your own way, you might find yourself happier than you could ever imagine.

If you would like to read the series in order, this is the order you should read it in:

Purchase Seducing the Bridesmaid from Amazon or your favorite eRetailer