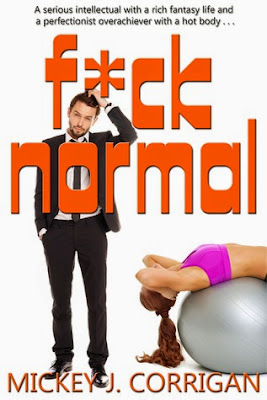 What happens when you marry a serious intellectual with a rich fantasy life to a perfectionistic overachiever with a hot body? Sometimes you get discord and separation. Other times, you get Goodreads, too many bottles of Haut-Brion, a luxe swingers club, and Lexus sex.

Barton and Katelyn Fiske are a normal couple with some all-too-normal marital issues. The Fiskes have two small children, an underwater mortgage, and too many bills to pay. He works hard, she spends harder. They haven't had sex in months, and Barton is sleeping in the den of their colonial-style home in Downwind Beach, Florida. The Fiskes attend couples’ counseling, but it isn’t helping. They're on the verge of breaking up their ten-year marriage.

Katelyn wants her husband to stop fantasizing about a woman from his past. Barton wants his wife to stop prying into his private thoughts. And Dr. Colony, their high-end Palm Beach therapist, wants husband and wife to practice her mutualization exercises so that they can enjoy a normal relationship.


F*ck normal, Barton thinks. Little does he know, his wife is thinking the same thing.

This was a very outrageous book.  So much happens that I had to remind myself that it all happens in only one day.  F*ck Normal is the story of Bart and Katelyn Fiske.  They have been experiencing marital issues for the past 11 months or so.  Most of the trouble stems around the fact that Bart has been fantasizing about a woman that he had a one night stand with back in college. It’s so bad that he had wrote her several letters and poems but he never sent them to her.  Katelyn finds out and withholds sex for 11 months.  That’s just the short version of their problems.

The book opens with Bart and Katelyn preparing to make another failed visit to their marriage counselor.  Everything that happens seems to be based around the couple’s lack of sex.  If I gave you more details, it would actually ruin the book since it all happens in one day.  Nonetheless, they both attempt to explore some other sexual encounters that result in surprise endings that can only be classified as a comedy of errors.  If this was a movie, it would be an X-rated parody.  The language was graphic and the descriptions of their escapades left nothing to the imagination.  The fact that this is a couple that was living a fairytale life at one point, just makes this even more of a farce.  Oddly enough, I’m sure that was the point of this book.

If you are interested in reading an over the top romp, this is definitely the book for you.  I would love to read another book like this from the author.  It was hilarious.