Review ~ TEMPEST IN A TEAPOT by Amanda Cooper 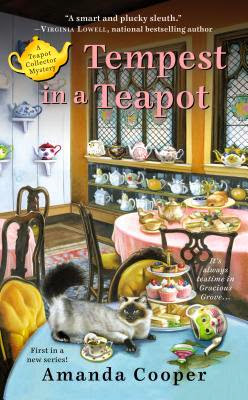 Tucked away in the Finger Lakes region of Upstate New York is the charming town of Gracious Grove, where time moves slowly, gossip spreads quickly, and the scones are to die for…
When her fashionable Manhattan restaurant goes under, Sophie Taylor retreats to her grandmother’s cozy shop, Auntie Rose’s Victorian Teahouse, where serenity is steeped to perfection in one of her many antique teapots. The last thing Sophie expects is a bustling calendar of teahouse events, like her old friend Cissy Peterson’s upcoming bridal shower.
Not everyone is pleased with the bride-to-be’s choice of venue—like Cissy’s grandmother, who owns a competing establishment, La Belle Epoque, and has held a long-simmering grudge against Rose for stealing her beau sixty years ago. Tensions reach a boiling point when Cissy’s fiancé’s mother dies while sampling scones at La Belle Epoque. Now, to help her friend, Sophie will have to bag a killer before more of the guest list becomes a hit list…

REVIEW
As a child, twenty-nine-year-old Sophie Taylor loved spending time with her maternal grandmother, Rose Freemont, in Gracious Grove, New York.  Her favorite pastime was spending time at Auntie Rose’s Victorian Tea House, owned by her grandmother, and learning about food and teapots.  Sophie went on to become owner and chef of her own restaurant in Manhattan called In Fashion.  While the food was good, the restaurant wasn’t able to survive the turbulent market.  Now trying to regroup and figure out what her next step should be, Sophie returns to her grandmother and the small but beautiful town of Gracious Grove.

Upon returning, Sophie starts to help her grandmother out at Auntie Rose’s and reconnects with old friends.  One old friend in particular is Cissy Peterson, who happens to be a month away from marrying Francis Whittaker,Jr. Even though Sophie has been away for a long time, she’s surprised by this news. Even more surprising is learning that Cissy wants to have her tea themed bridal shower at Auntie Rose’s instead of her grandmother Thelma Mae Earnshaw’s La Belle Epoque tearoom.

It’s common knowledge that Rose and Thelma haven’t gotten along in almost sixty years and that Auntie Rose’s is so much better than La Belle Epoque.  To make her grandmother, who is a grumpy mean-spirited woman happy, Cissy agrees to have an engagement tea party at La Belle Epoque.  Unfortunately, a happy occasion turns horribly sad when Francis’ mother, Vivienne Whittaker collapses and dies during the middle of the party.

Vivienne’s death gets ruled a homicide and the hunt for the murderer is on. But finding the person responsible isn’t going to be easy with everyone saying how much they loved Vivienne.  Feeling for her friend and being uneasy about a murder happening across the street from them, Sophie along with her grandmother Rose and Rose’s employee Laverne work together to figure out who killed Vivienne and why.  When Sophie starts to ask too many questions, someone sends a message that they need to back off.

I really enjoyed reading Tempest in a Teapot.  While the setting is in upstate New York, the story had a down home southern feel to me.  Meaning in my mind, every time a resident of Gracious Grove was speaking, I kept hearing a southern accent.  I found all the main characters to be people I would love to hang out with.  Well, all except for Thelma Mae.  That woman is as mean as a nest of of disturbed wasps.  I had no idea who committed the murder until Sophie figured it out.  I’m truly looking forward to the next book in the series and the possible development of a love interest for Sophie.

Purchase Tempest in a Teapot from Amazon or your favorite Retailer