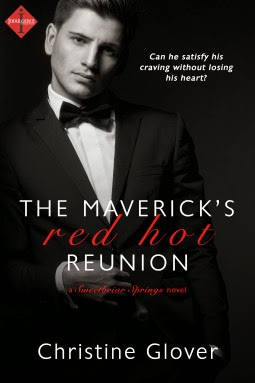 
Can he satisfy his craving without losing his heart?

Corporate Maverick Zach Tanner returns to North Carolina to rebuild his dying friend's resort. He's got the money, the power, and the will to transform Sweetbriar Springs into a premier spa for the glamorous, but he doesn't count on the woman he once loved…and lost…to handle the construction contract. Zach thought he'd buried his desire for Kennedy five years ago. He was wrong, and now he’s determined to satisfy his craving...

Construction company owner Kennedy Gibson is eager to restore Sweetbriar Springs, but when she realizes Zach is her new boss she's terrified he'll learn the truth about their breakup so long ago. She vowed never to hurt him again, but she can't deny the passion he reignites in her. She wants to believe she has a chance for a different future with him, but will her secret threaten to destroy their red-hot reunion?

Hi Christine.  Thank you for joining me today.
Hi Kim. Thank you for hosting me.
You have quite a playlist for The Maverick's Red Hot Reunion. I LOVE Bon Jovi.  When you're writing are you actually listening to the songs or do the songs simply serve as inspiration for your writing?
I LOVE Bon Jovi, too. I have several of his songs on my playlists for the books I write. I do listen to the songs when I’m in first draft mode. I try to choose songs that reflect the theme of the books when I build my playlists. A lot of the songs crossover because my overarching story theme is pretty much the same from book to book. I like to listen to my music when I’m out in public or when the house is crawling with family. It’s a great way to tune out the world and focus on the story.
I have to admit the blurb for the book has my attention.  The story seems to be filled with heartache. What was the most difficult scene for you to write?
There were many scenes that were difficult to write, but perhaps the hardest one was when Zach and Kennedy faced their own devastating loss amidst the reality of their friend’s sudden downturn in health. I cried a lot during that scene. And when Zach was all alone, lost and angry and confused after the big black moment between him and Kennedy, I couldn’t stop crying. He just ripped my heart open and helped me process a lot of personal losses in my own world.
I have to say.... It’s NOT a good thing for me as a reader when the author says that they cried writing a scene.  Now, I know I’m going to cry reading it.  What's your favorite part of a book to read or write and why?  Do you like the beginning where all the groundwork is being laid out, the middle where the couple is feeling each other out, the middle-to-end where the drama unfolds or the end where the true declaration of love is made?
My favorite parts of the books I read and write are the push/pull of attraction between the hero and heroine. They’re attracted to each other, but their internal emotional baggage stops them from acting on it completely. That is until they begin to see the person hiding behind the mask they present to the world. Once they discover that they have a connection emotionally, then I love to give them their journey toward their happily ever after. Of course, I make it hard for them. They have to grow. And I expect the characters that I read about to grow as well. They have to earn each other as soul mates and that requires a big change from within. Most of all, I love the final proposal. When the hero goes to the heroine and bares his heart for her one hundred percent because he knows she’s the right and only woman for him. Le sigh.
The proposal moments are one of my favorite moments as well. When you started writing The Maverick's Red Hot Reunion did you know it was going to be part of a series?
The Maverick’s Red Hot Reunion was born out of another series I was playing with in 2011. I took four book arcs and rolled them into one story—a very different story than I had intended to write. But that’s sort of how I roll. And as I was writing the new story, two secondary characters popped out and I knew I had to write about them: Caleb and Hannah’s story is what I’m working on right now. Then my editor suggested I write a novella and I had to go back into The Maverick’s Red Hot Reunion to see if there was another story hiding inside its pages. Then I discovered Michael’s middle sister, Jessie, and voila! A prequel was born. Jessie’s story is in revision right now with my editor at Entangled Publishing and should release before November. It’s tentatively called Beauty and the Marine. But don’t let the Beauty part make you think it’s Jessie. This beauty is Blake Johnston, a Hollywood Action hero who becomes a part of Jessie’s world in Sweetbriar Springs just after she’s been medically discharged from the Marine Corps.
Lol. I totally thought Beauty was the girl.  Are you a plotter or a panster, where the characters just tell you to sit back and let them write their own story?
I’m a hybrid writer. I love getting to know the characters from the inside out. I have dossiers about each of them. I know their birthdays, middle names, history, astrology signs, and personality traits along with their physical traits. Once I know what drives them emotionally, I loosely plot the emotional turning points of the story. I often have a starting scene and ending scene to close the circle, and a lot of gray area to battle out as I’m writing the first draft. If the characters are talking to me in the first draft, I roll with their lead. I may go back and change how and where the words go during my revision passes, but I trust the characters first. I am actually a reviser at heart. So if I can get through the first draft without worrying about pesky details like clothing and setting, and then I am good to go during the revision process.
Thank you Christine for taking the time to answer some questions for me. I'm looking forward to reading the book.
You’re welcome. And I hope you enjoy reading The Maverick’s Red Hot Reunion!!

Christine Glover is a contemporary romance author of sensual, sizzling, emotional contemporary romances. Her tough, no-nonsense heroines aren’t easily swayed by great looks and killer abs, but they surrender their hearts to their heroes when they discover these Alpha men deserve love. She still has to figure out how to apply makeup or style her hair without someone popping into her head to give her another scene to write. Ultimately, she sits down to write about two lost souls finding each other, discovering home, and giving her romance characters the happily-ever-after endings they deserve.

Born in the Netherlands, Christine’s parents immigrated to Canada where she spent her formative years. After meeting her own real life hero, she married her Texan Alpha man and moved to the United States where she’s lived both north and south of the Mason Dixon line. Now Christine lives in Alabama with her husband the Physicist, her wonderful daughter, and two insanely adorable cats. She enjoys finding the silly in the serious, making wine out of sour grapes, and giving people giggle fits along with heartfelt hugs. When she’s not writing, you can find her traveling the world, cooking gourmet food, and desperately seeking a corkscrew.

As part of her blog tour, Christine is giving away a Kindle Paperwhite.  Good luck.