Review ~ LOVE ON THE BOARDWALK by Christi Barth 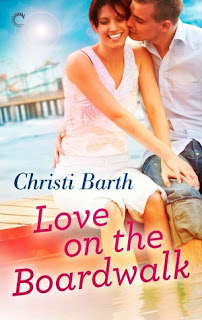 Atlantic City is the perfect place for detective Bradley Hudson to nurse his broken heart. A week of beer and strippers is sure to erase his former fiancée from his memory for good. What he didn’t count on was running into a sassy redhead from his past. Maybe a rebound romp is an even better plan…


Trina Trimble, private eye in training, is thrilled to be reunited with the hottie she almost hooked up with last summer. She’s undercover on her first solo case, but there’s always time to lock lips with a sexy cop. Besides, a fun fling with Brad doesn’t have to last beyond his week in town.

Brad and Trina are supposed to be just flirting, not forging a new forever. Brad’s still healing, and although Trina changes careers the way other women change shoes, she has finally found her calling in her new life of disguises and stakeouts. But when an irresistible job offer threatens to lure her away, Brad will need to decide to let her go or bet it all on love and risk his heart again.

REVIEW
Love on the Boardwalk is the follow up to Love at High Tide.  I would say the book is a standalone, however, you might get a little more out of it if you were to read LAHT first.  The characters from LAHT make an appearance and events from that book are mentioned often.

Trina Trimble, is a twenty-seven-year old who changes careers quite often.  She has a problem with finding anything that sticks and keeps her attention.  She finally thinks she has found her calling as a Private Investigator.  Bradley Hudson is a homicide detective with the Maryland State Police.  He is still trying to get over his broken engagement to a woman he never really wanted to be married to in the first place.  It’s been six months since Brad and Trina first met each other.  They have seen each other in passing several times.  Brad’s cousin Cooper is dating Trina’s best friend Darcy.

Love on the Boardwalk finds Trina and Brad both in Atlantic City.  Brad is down to let off some steam, since it is the week of his non-existent wedding. Trina is in town working on a surveillance case, as she’s currently a Private Investigator in Training.  It’s no secret that the two had an attraction going on the summer before, but they both knew then wasn’t the time to act on it.  Trina wants to help Brad get over his broken heart and the two end up spending time together.  Trina for all of her indecisiveness when it comes to her career is really very intelligent, and has a big heart.  She’s observant and sees things no one else does.  While wrapping up the case she’s on at a strip club, Trina senses that something is going on with one of the patrons of the club.  Against Brad’s objections, she starts to look into the case, which is actually bigger than anyone ever expected.

On the surface, Brad and Trina are total opposites.  But the cool thing about them is that they are just what the other needs.  Trina wants a man who will believe in her and support her no matter what.  Brad wants someone to share his job with, someone who actually wants to be with him, and wants to know how his day went.  He wants someone who will make him laugh and enjoy life.

I really enjoyed Love on the Boardwalk even though I had an idea of what to expect from it.   I also enjoyed seeing Coop and Darcy from Love at High Tide make a return appearance.  I liked watching the relationship of Brad and Trina develop.  Most of all, I loved watching the way Brad and Trina forced the other to grow just by listening to and challenging each other.

Purchase Love on the Boardwalk from Amazon or your favorite eRetailer