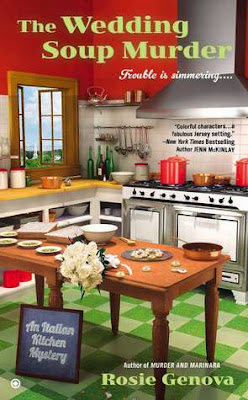 Victoria Rienzi came home to the Jersey Shore to write a new book, learn the family restaurant business, and practice the fine art of Italian cooking. But when delicious dishes are paired with murder, Vic has a little too much on her plate…


When Vic asked her nonna for more responsibility in the kitchen, she didn’t mean forming a thousand tiny meatballs by hand for the family’s famous wedding soup. The dish is to be served at the reception for a close family friend at the exclusive Belmont Country Club. And once there Vic has to deal with a demanding bridezilla and clashes in the kitchen—between the staff and servers, between two egocentric head chefs, and between the country club president and…well…everyone.

The wedding comes off without a hitch—until the body of the club’s president is found on the beach below a high seawall. Now Vic will need to use her noodle to find out who pushed whom too far…before she’s the one who lands in the soup!

The Wedding Soup Murder by Rosie Genova was just what I needed to put me in a relaxing mood to read.  This is the second book in the series and can be read as a standalone.  I didn’t read the first book in the series, Murder and Marinara and I had no problem getting into The Wedding Soup Murder or understanding the dynamics of the characters.  The last couple of cozies I've read have had characters who irritated me with their actions, but the actions of Victoria 'Vic' just seemed genuine and natural.

Victoria ‘Vic’ Rienzi has moved back to her hometown of Oceanside Park, New Jersey for the summer.  She writes mystery books under the pen name Vick Reed.  But she wants to write a non-mystery book and learn how to cook.  She spends most of her time at her family's Italian restaurant as a prep cook and waitress.  Why she never learned to cook is a little bit of a mystery to me.  But that’s besides the point.

Vic is tasked with preparing the soup course for the wedding reception of a family friend's daughter.  While at the reception, chatting with Dr. Charles ‘Chickie’ Natale (the family friend) and his wife, they are interrupted by Elizabeth Merriam.  Elizabeth is the President and Events Manager of the Belmont Beach Country Club.  During this interruption, Vic learns something about the man that comes as a complete shock to her.

The next day, news spreads about the death of Elizabeth.  This puts a bigger light on Dr. Chickie.  Apparently in the previous book, Vic helped to solve the murder case.  Now, with Elizabeth’s death and suspicion on Dr. Chickie, her father wants Vic to prove that their friend is innocent of murder.  “You’re a regular Jessica Fletcher.  Murder follows you wherever you go.” Against the wishes of her mother, grandmother, and Detective brother, Vic and her sister-in-law set out on an investigation.

I loved this case of whodunit tremendously.  Just when you think you knew what happened and why, think again.  The characters are all likeable.  There's a romance element that involves a love triangle between Vic, her former boyfriend, Tim and a new carpenter in town, Cal.  I can’t wait to see what happens there.   And of course, there are wonderful Italian food recipes.

The Wedding Soup Murder gave me everything I could wish for in a cozy mystery and more.  My one complaint is that I have to wait a whole year to find out what else Vic and her family get into.