Sometimes home is the place your heart leads you. ~ FINDING HOME by Roxanne Snopek 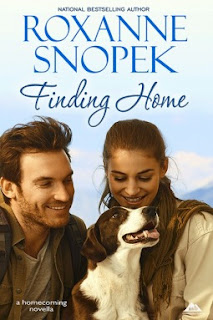 
Second chance is a gamble she can’t afford to take.
Fourteen years after her abrupt departure, Samara Davis is back in Marietta, Montana. Now a widow, all she wants is to give her anxious four-year old daughter, Jade, a happy, stable home. Unfortunately, the heritage house she purchased is nowhere near ready for occupancy. And the man responsible for the delay is none other than high-school golden boy and love of her life Logan Stafford, available, interested and just as swoon-worthy as ever.
But this single mother has one priority. She’s all Jade has, and she’ll do anything, make any sacrifice, for her child’s future. And getting distracted by a long-lost boyfriend is not on the agenda.
Logan Stafford never forgot the lonely girl from the wrong side of the tracks who broke his heart. Not only is she as irresistible as ever, but her delightfully odd little girl has him wrapped around her finger in no time. Believing they’ve been given a second chance, Logan’s determined to pull out all the stops on the house to prove to them both that he’s a guy they can count on.
But, despite how easy it is to love Logan, second chance is still a gamble Samara can’t afford to take.

REVIEW
I love the world Tule Publishing Group has created with its Montana Born imprint.  It’s a world where several characters cross over into other books written by different authors.  The best part is that the books are all stand alone.

Samara (Sam) Davis is a young widow who unexpectedly lost her husband, Michael, a little over a year ago.  Now, along with her four-year-old daughter, Jade, she returns to the one place that ever felt like home, Marietta, Montana.

Originally from and still living in Marietta, Logan Stafford is a curriculum designer who helps high schoolers in the neighboring town of Livingston learn how to build and rehab houses.  Logan is also the guy Sam left behind without even a goodbye in high school.

Sam and Logan meet up again years later, when she purchases a house Logan and his teen chargers are tasked with rehabbing.  For both, the attraction is still there, however, Sam’s only priority is to take care of her daughter.  Sam and Jade are all each other have and Sam wants to make sure Jade is taken care of.

I seriously loved Logan from the moment he appeared on the page.  He’s extremely good with Jade, who appears to have some issues.  He’s patient with Sam too. He just wants to bare some of the weight she carries around on her shoulders.  For me, Sam was a little hard to understand.  It’s no secret that her childhood and teenage years were difficult, but she seemed a little closed off. Sam wants family and friends but she isn’t sure how to handle them.
I really liked the book and the sense of community that poured off the pages. However, I’m a big fan of epilogues and I like to see how things are tied up.  I would have loved to see how Sam, Logan, and Jade continued their relationship.  But, since this is part of a series, maybe in the books to follow by other authors I will get a glimpse of them.  Needless to say....I’m looking forward to rest of the series.

**Received a copy from Tule Publishing in exchange for an honest unbiased review.**