Review ~ FLIRTING WITH THE COMPETITION by Kerri Carpenter 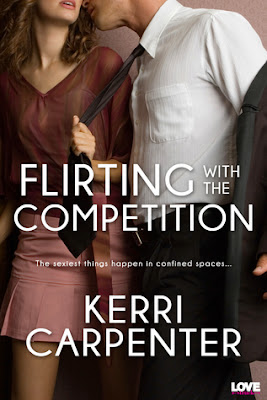 Under normal circumstances, Whitney March might have appreciated sharing an elevator with a ridiculously attractive and clearly wealthy guy. Even enjoyed it. But when her companion turns out to be the man who almost ran her over in parking garage moments earlier? Nope and nope. Besides, she's on her way to a job interview at a prestigious law firm, and she needs to stay focused. Not staring at the rich and sexy jerk. Then the elevator comes to an abrupt stop. They're stuck.

Jordan Campbell has every intention of acing the interview for his dream job, and he's not about to let anything stop him. Not even the sexy, capable, and fiery woman who turns out to be his main competitor he's trapped with. The only thing they have in common is determination to get the job...and an escalating attraction. And it's only a matter of time before these competitors indulge in a very sexy little connection between floors.

REVIEW
What could be better than getting the opportunity to interview for your dream job.  Whitney March and Jordan Campbell are about to find out that love can happen anywhere and where you least expect it.

It’s Fourth of July weekend and Whitney is on her way to the opportunity of a lifetime.  She’s about to get interviewed by Randall Wyatt, CEO of Wyatt & Becker, one of the most prestigious law firms in Washington DC.  Whitney’s good mood is almost wrecked, when she’s almost run over by a guy in the parking garage of the building.

Jordan Campbell is excited to be able to interview for a position at Wyatt & Becker.  He sees this job as his chance to finally be able to step out of his family’s shadow and be his own person.  The only problem is that a non-driving infuriating woman has made him late to his interview.

Whitney and Jordan are both rushing up for their interviews, when the elevator they’re sharing gets stuck.  The two spend several hours together being attracted to each other and learning about one another.

Flirting with the Competition is a sweet romance.  Kerri Carpenter had me reading the book so intently because I wanted to know how Whitney and Jordan were going to get out of the elevator and what was going to happen between them.  I loved the friendship and understanding that blossomed between these two.  Whitney and Jordan are both really good characters.  I’m looking forward to reading more books from Kerri.

Purchase Flirting with the Competition from:
Amazon | Barnes & Noble | Goodreads