An interview with Veronica Forand and Susan Scott Shelley, authors of FLIRTING ON ICE

Hi ladies!!!  Welcome to Read Your Writes Book Reviews.  I’m SO excited you could stop by today.

Veronica:  Hi. Thanks for having us.

Susan: Thanks Kim, for having us. *waves* Hi guys!

I read Flirting on Ice and loved it!  I ended up having a couple of questions.  The first is how was the writing process like for you two? Did you each take a section of the book to write?  Did one of you take on Zac and the other Heather and collaborate on the rest?

Veronica:  We usually each pick a POV and write those scenes. Then we edit each other’s scenes so that the characters actions are consistent throughout the book.

Susan: So happy you liked it! The joint writing process is really interesting. From initial stages of plotting, all the way through to publishing and promotion, two heads are really better than one.

What's the one thing you love most about Zac and Heather?

Susan, that really sums up the book.

Veronica: And in the end, they both pursue their personal goals as well as focusing on each other. He remains the team captain and she returns to helping others in her philanthropy.

There's a really really small element of suspense in Flirting on Ice. You both write romantic suspense individually, any chance you two will collaborate to write one together?

Susan: Check out our next novella in this series. It has a heavy dose of suspense!

Veronica: Susan won’t brag, but I will. The next in the series won third place in the Daphne Contest for Mystery and Suspense.

Really excited!  Before Veronica mentioned that you actually placed in a contest, I thought the book would be good.  Now, I KNOW the book will be good.  Nicola, my blog mate and I are both excited this is the beginning of a series.  Is Alec "Sequoia" O'Meara the next Atlantic City Hustler who's going to get his own book?

Veronica:  You can’t name a character Sequoia without creating his own story.

Susan: Yes, Alec’s book is up next. The gentle giant meets his match in a feisty red head.

Veronica:  Snowy, so I can ski.

Susan: Give me the sun! But really, a rainy day or sunny day can suit me, depending on mood. I’m not a fan of snow, but I don’t mind a marshmallow world – unless I have to drive in it.

Susan: Coffee is my morning wake-me-up drink, but in the afternoon, I love a big mug of tea. Irish Breakfast Tea is my favorite. And yes, I like to think breakfast tea in the afternoon is a bit rebel-ish. (smile)

Are you righted handed or left handed?

Susan: NFL Network’s Total Access, The Big Bang Theory, Finding Bigfoot, and I love reruns of The Golden Girls and British comedies like As Time Goes By.

Susan: My favorite sports are hockey and football. I have favorite players on nearly all NHL and NFL teams. For teams, for hockey, I love the New York Rangers and for football, my favorite team is the Green Bay Packers.

Final question.  What's next for you two?

Susan: My novella “Rekindled” will be part of a multi-author anthology Snowy Days, Steamy Nights: Come in From the Cold, available on January 2, 2015. Veronica and I have Alec’s story coming soon from Entangled, too, and, I’m hard at work on a new full-length sports series.

Thank you so much ladies, for taking the time to answer some questions for me.

Veronica:  This has been fun. Thanks.

Susan: Thank you for having us. Happy reading, everyone! (smile) 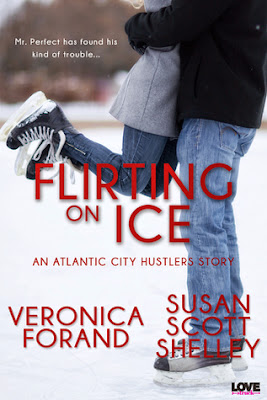 Mr. Perfect has found his kind of trouble...

Professional hockey player Zac Elliott is in top form. He's having the best season of his career, the local fans can't get enough of him, and he's in the middle of the most successful contract negotiations of his career. When the sexy little spark between Zac and the team owner's daughter blazes to life, no matter how forbidden, he can't resist.

Philanthropist Heather Ryan can't keep her hands off of Zac. If her father finds out, it could end Zac's career and ruin her reputation. What they share is deeply passionate and intensely private...until the press exposes their illicit relationship.

Now the fans have viciously turned against Heather, Zac's game is faltering, and even his team has deserted him. The only way out of the penalty box is for Zac to play hockey like life—and love—depends on it... 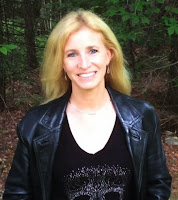 Veronica Forand is an attorney and an award-winning writer of romantic suspense.

She’s lived in Boston, London, Paris, Geneva, and Washington, DC and currently resides near Philadelphia. An avid traveler, she loves to roam across continents with her husband and kids in pursuit of skiing, scuba diving, and finding the perfect piece of chocolate.

Susan Scott Shelley is an award-winning author of contemporary romance and romantic suspense.

She currently resides outside Philadelphia with her very own Superhero and spends her days writing about tough heroes, smart heroines, and love being the strongest magic there is.

In addition to writing romances, she is also a professional voiceover artist. Her favorite things include running, sports, hard rock and old Hollywood movies. An unapologetic optimist, she believes life should be lived with laughter and a sense of wonder.